The Maoists are giving truce a chance, but their patience seems to be fast running out 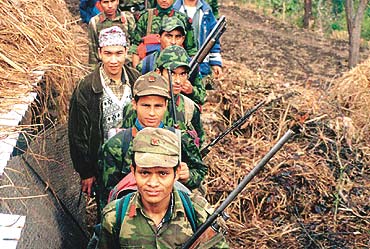 outlookindia.com
-0001-11-30T00:00:00+0553
There are many new faces in the market these days, in this small, unremarkable town on the main road to the far western hills. Mostly young men and a few women, they wear newly stitched camouflage trousers and untucked grey or checked shirts. They are wary, especially of an outsider asking questions, but around a wooden carrom board, boisterously enjoying the country's favourite game, there are smiles and a palpable sense of relief. Ten years of life on the run, of Maoist armed insurgency against the Nepali state, is over.

After 15,000 deaths and a decade of devastation, Nepal is at peace. For now.

Sahajpur is the nearest village bazaar to one of 28 new Maoist encampments all along the country's southern border region with India. According to agreements reached in Kathmandu last month with the Seven-Party Alliance (SPA) government and the United Nations, the camps are to house tens of thousands of Maoist fighters and, most importantly, their weapons.

"The people have chosen peace, they have asked us to stop fighting and put our arms under international supervision," says camp commander Comrade Utgam, a rangy man in his late 30s. On a rocky promontory overlooking a deep valley, he sits at a wooden table, next to a solar-powered wireless telephone. It's the Maoists' main means of communication from camp to camp, he explains. His soldiers come and go with messages, stopping in the bazaar to play carrom or eat oranges.

About an hour's walk from Sahajpur village, dozens of blue canvas tarpaulins can be seen on a ridge nearly cleared of trees. Hastily built huts of wood and stone dot the rugged landscape. One of the fighters, Sahel, looks up from a mid-morning chess match to explain: conditions are tough, there's only a single water source, a small creek outside the camp boundary. Food is available, basic rations of rice and lentils, but Maoist soldiers have to club together to buy their own vegetables and fruits for cash. "We want what the government has promised us," he says. "Money to run the camps, food, support, medicine. Already people are falling ill. We're not used to living in camps. When we fought, we lived among the people, ate with them in their villages. This is a new thing."

Sahel's "new thing" began in November 2005 when the Communist Party of Nepal (Maoist) signed an agreement in New Delhi with the SPA, then waging a campaign against the autocratic rule of King Gyanendra. Within six months, the monarch capitulated to what's now called the second Jana Andolan—the People's Movement for Democracy—and handed power back to political parties. The Maoists declared a ceasefire and began intense negotiations, apparently aimed at entry into the mainstream of Nepali life and politics. Last month's agreements on arms management and an interim government followed in quick succession, sparking euphoria among rebels and ordinary Nepalis alike.

That feeling is ebbing rapidly, particularly in the 28 Maoist camps that the rebels set up in the past few months. In some areas, local people say Maoist commanders are exaggerating the number of fighters in the camp. In other places, there are reports of food shortages, disease and discontent. Some 200 cases of diarrhoea are being treated in Masuriya cantonment in the western district of Kailali. There are no doctors, only field medics, to provide treatment.

The camp's brigade commander, Suresh Pahadi, complained that the government was providing no direct assistance of any kind. "We came in good faith," he said, sitting at the checkpost outside the camp boundary where journalists await interviews with senior figures. "The government promised Rs 17 crore but we have seen no money at all. We are not happy with this".

In Kathmandu there seems little awareness of conditions in the Maoist camps. Finance minister Ram Sharan Mahat says finding more money to help settle the former rebels in their camps will be difficult without outside assistance. "We've asked the international community and though we have heard many fine words, we have seen nothing so far. Nothing," Mahat says. Other cabinet ministers have been lobbying him to free up much larger sums for the Maoists, but the minister is firm—there's simply not enough in the pot. 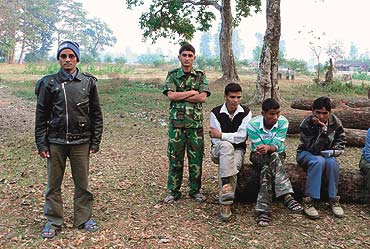 Conditions in rebel cantonments could influence the outcome of the peace process, warn military experts like Sir Sam Cowan, a retired British general who has travelled extensively in Nepal. "The situation demands a sense of urgency and this appears conspicuously missing," Cowan says, despite a series of peace agreements he describes as "pragmatic and workable". The UN secretary general's special representative in Nepal, Ian Martin, says the World Food Program and other agencies are ready to provide help to the camps, "but we need a request from the government, from the parties. The UN hadn't originally been asked to do this".

The pace of events—sometimes dragging, sometimes leaping forward unexpectedly—does seem overwhelming to many. Martin's UN operation is still being established in Kathmandu, and the Security Council in New York won't meet until January to hear his request for hundreds of arms management and election monitors to ensure the Maoists and the Nepali army follow the agreed rules. "For the UN, we're moving at lightning speed," said a diplomat close to the process, "but we are definitely not keeping up with demand and developments." Plans to put equal numbers of Maoist and army weapons into India-funded, locked shipping containers are still on hold as the UN deploys its forces, and the containers are moved to remote, rugged campsites.

Some 35 UN soldiers from nine countries are expected to be based in the camps by January-end. A dozen or so are arriving in the coming days. An India-backed idea to deploy ex-Gurkhas to manage arms until the UN is fully deployed is picking up support among Maoists and government leaders. But no one seems to know who would recruit, train and pay for such a battalion. "They are not wearing (UN) blue helmets, that is for sure," says a UN staffer in Kathmandu.

The biggest fear of most Nepalis is that a failure to arrange arms management quickly could jeopardise plans to hold constituency assembly polls in June—a key Maoist demand. That would put polls off until at least November, after the monsoon and Hindu festival season, sorely testing the rebel commitment to peace—already questioned by many here amid continuing reports of extortion and Maoist violence. "We did not fight this war to wait forever for change," warns Pahadi ominously. "And we won't."