Tensions had been simmering for a while. An East Delhi colony explodes on Diwali. 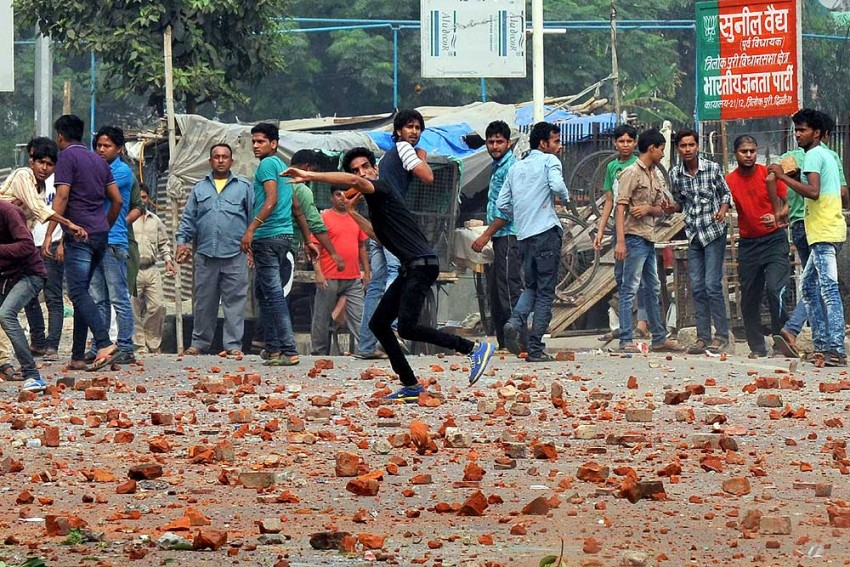 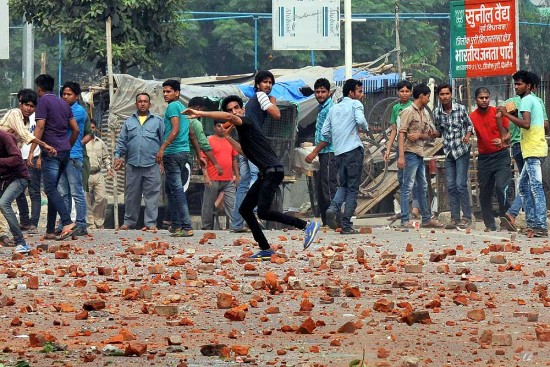 Fire On The Yamuna

“Is baar agar vote maangne yahaan koi bhi aaya toh chappal uthake marenge (If anyone comes here asking for a vote this time, we will hit them with slippers),” she screamed, angry tears well­ing up in her eyes. The men and women surrounding her shake their heads in agreement. She looks up with her bloodshot eyes and says, “All of you want to come here and see our wounds, where we got beaten, how badly we are bruised. You’ll take pictures and leave, but we’ll continue to starve.”

Before she can finish her rant, another women takes over and says, “When our neighbours open the grocery shop shutters a little to give us something to eat, the police mercilessly lathicharge us. If we tell them that we are starving, they say, “Jao roze rakho (Fast like it’s for roza)”. “They aren’t even allowing us to use the common toilet across the road. ‘Ghar me peshaab karlo’ (Pee in your houses), they tell us when we go there,” says 57-year-old Sultana, pointing to the Sulabh Shauchalay across the road.

“Muslim elements are violent by nature. It is in their nature to rape and loot. Riots are inevitable in areas where they are present.”
Sunil Vaid, Ex-BJP MLA

Nearly 10 of them belonging to block No. 27 in riot-afflicted Trilokpuri drag me to their homes and point to the broken locks, windows and exhaust fans and eventually to the black-and-blue welts from the police beatings. The block is less than a three-minute walk away from block No. 20, where an insignificant brawl between two young­sters on the night of Diwali, October 23, spiralled subsequently into violent riots between two communities.

In block No. 27 comprising some 500 households, the 460-odd Muslim households overwhelm the Hindu population. “In 30 years of our moving here, we have never seen any such incident,” says Rak­esh Kumar, who owns a tailoring store in this block. “The Muslims here could have come together and murdered us anytime if they wanted to. They didn’t have to wait for this incident to happen. Nothing of this nature has ever happened here before.” This was one of the two blocks with a Muslim majority in the otherwise Hindu-dominant Trilokpuri.

Together, those from both communities in the block blame the ex-MLA from the BJP, Sunil Vaid, and Ram Charan Gujarati (also from the BJP), for instigating the riots. “The riots really had noth­ing to do with the fight between the two boys on Thursday night. Everything had come under control that night itself, but suddenly large-scale violence erupted on Friday morning, after elaborate mee­tings with Dalits had been conducted by Gujarati in three Valmiki temples in blocks 18, 11 and 13,” one of them says. A meeting of nearly 200 Valmikis also took place in Sunil Vaid’s house.

On the deserted main roads of Trilokpuri, the Delhi police in their khakis and the Rapid Action Force in their blue uniforms sit in groups, watching over  every junction. Most of them are visibly bored, talking among themselves and occasionally accosting the few locals who have gingerly stepped out to fetch something or go to work or to simply use the toilet.

“The BJP wants a Hinduisation of Dalits to increase votebank. Riots rake up an anti-Muslim sentiment among the Valmikis.”
Apoorvanand, Activist, Delhi University Prof

Walking through the narrow bylanes for at least half an hour (and followed for some part of it by a suspicious policeman), I find a way through block No. 20. A group of women sitting on their doorsteps are more than ready to narrate the events of the past days. “The fight started right here,” says Han­eema, pointing to a small park-like enclosure where the disputed Mata ki chowki is situated. “It was only a fight between two young buys, one Hindu and one Muslim, which the political parties took advantage of. But somehow everything is calm here now, all the tension and violence has moved to block Nos. 15 and 27, where the Musl­ims stay. Those are the two blocks that are most affected.”

The Mata ki chowki in block 20—a table with a photo of goddess Durga on top of it—had been inaugurated by BJP MLA Mahesh Giri over a month ago on the occasion of Dussehra. He also donated Rs 51,000 for the installation of the chowki. The ‘shrine’, still in its original place, is a stone’s throw away from a masjid. This is the first time a chowki has come up in Trilokpuri, since the colony was established in 1976, residents say. (When ACP Rohit Meena was asked if permission was sought to instal the chowki, he said he couldn’t comment on the matter.) This is also the first time communal violence has erupted in Trilokpuri since the dark days of the 1984 anti-Sikh riots, when over 350 Sikhs living in the area were pulled out of their homes and torched in public.

Dodging the policeman, I find my way through to block 15. The minute I step foot into it, the glittery remains of Diwali you see elsewhere is nowhere to be seen. “Ladayi shuru hui block 20 pe, par maut hamari ho rahi hai (The fight began in block No. 20, but we are suffering),” one of the men huddled together at the end of the street says. “After the fight in Block 20 on Thursday, October 23 (Diw­ali day), by about 7 pm everything was back to normal. Suddenly, the next morning, after all the men had left to work and only some housewives and children were left in the block, we were attacked from all four sides.”

All blocks surrounding block 15—that is, 14, 16, 17, 18 and 19—are Hindu majority blocks. Asked if they did anything to retaliate, Ishrat looked at me and declared loudly, “Of course we threw stones back. We went to the terrace, took bricks from the walls and threw it back. So many of us were bleeding, we had to defend ourselves and our children.”

“These stories are cooked up. Muslims are a minority here, they don’t have the guts to urinate at a Mata ki chowki as Vaid alleges.”
Raju Dhingan, AAP MLA

After some moments with everyone drowning out each other trying to give their version of events, Reshma, a woman well into her 60s, yells and asks them to shut up. “We saw a truck, full of at least 150 men, their faces covered with their handkerchiefs enter our street in the morning. They seemed very young and did not look like anyone from our locality. They had been brought here to incite the violence,” she says.

One after the other, they speak of how several among them have fled in fear of the random arrests by the police, of how the Friday bazaar was looted and how only one shop was burnt, A to Z Collections, owned by a Muslim. “The Mayur Vihar police station is five minutes away and the Kalyanpuri station less than 10 minutes away. Yet, police didn’t arrive until after two hours of violent stone-pelting from all four sides into our block,” says Reshma.

Interestingly, it’s been revealed that the police received 190 ‘rumour calls’ of false incidents throughout the morning, perh­aps to ensure they didn’t reach the scene of the riots early. The police intervened to control the situation later, but prohibitory orders under Sec­tion 144 of CrPc weren’t enforced until October 25 eve­­ning, after three whole days of tensions.

Merely a three-minute walk through the narrow lanes from Block 15 is Block 21. Amid the nondescript houses on the narrow street, a three-storeyed one sta­nds out—it’s adorned with an orange-saffron banner, a lotus symbol and the bust-size photo of a man, hair neatly oiled and combed. I enter the house of Sunil Vaid, the ground floor of which has been turned into an office. A police officer is seated on a plastic chair below a photo of Sushma Swaraj blessing Vaid. He info­rms me that the ex-MLA of the area is in the shower. Some five minutes later, Vaid arrives in a blue safari suit, combing his hair. I ask him his version of the events. With characteristic calm, he says, “Madam, Muslim elements are rogues by nature. They are violent. Have you ever seen a riot during Id? Then why are there riots during Diw­ali?”

He takes a deep breath before continuing. “You must be living in a posh area where it seems like Hindus and Mus­lims are bhai-bhai. But in areas like these, you will see how Muslims are prone to raping women, robbing and inflicting all sorts of violence. Hin­dus, on the other hand, work hard to make a living.” The inspector sitting on the chair next to him nonchalantly continues to switch channels on the TV.

The timing of the riots, days before a byelection to fill three assembly seats and a possible re-election in the capital, lends to the riot a distinct political character. “The BJP lost in the previous election by over 17,000 votes. A fight was allowed to escalate to enormous proportions to gain political mileage from it,” says AAP MLA from Trilokpuri, Raju Dhingan.