"When a big tree falls, the earth trembles!" A Sikh displaying black humour told me: "That's okay, but were there only Sikhs sitting under that big tree?" 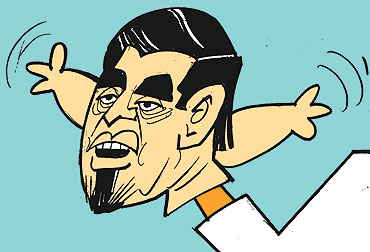 outlookindia.com
-0001-11-30T00:00:00+0553
Truly, we live in incredible India. After Jagdish Tytler and Sajjan Kumar were dropped as Congress candidates, a TV anchor asked: "But why did Congress field them in the first place?" An odd question! Both are sitting MPs who had been elected thrice to Parliament. The proper question should have been: "Why are we all in such a tizzy this time around?" Because a protesting Sikh journalist threw a shoe at home minister Chidambaram at his press conference?

Ah yes, the shoe! A curious incident, that. From less than two yards away it was thrown with careful aim to miss! By a reporter who supported the UPA government, of course. And Chidambaram—usually testy and acerbic—with what humane restraint he responded. "Gently, gently," he cautioned, as the reporter was led away to be released without charge within hours.

Predictably, the Sikhs came on to the streets to support the reporter. Predictably, Congress leaders began murmuring that Tytler’s and Sajjan’s candidature should be revoked. Predictably, they awaited Soniaji’s return to the capital for the decision. Predictably, Soniaji after consulting senior colleagues dumped Tytler and Sajjan Kumar.

Will this dim or illuminate Congress poll prospects in Punjab? Time will tell. But will the ghosts of 1984 be exorcised? If so, at what a small price—just by denying candidature to allegedly guilty MPs!

Should one sympathise with Tytler and Sajjan for this electoral, cosmetic punishment? Of course not! The duo can partially redeem themselves only if they now come out with the truth and tell the world and history what really happened during that fateful period in 1984. Will they tell us whether or not a dozen Delhi leaders were summoned to the 12 Willingdon Crescent party office to implement the pogrom with police backing? Will they identify the mastermind who issued the order? Will they confirm how the mastermind prevented the army, which offered to stem the pogrom within two hours, from intervening?

They need not tell us that Rajiv Gandhi was complicit and aware of the planned pogrom. Recall his speech justifying the pogrom: "When a big tree falls, the earth trembles!" A Sikh displaying black humour told me: "That’s okay, but were there only Sikhs sitting under that big tree?"

It remains to be seen if the Tytler-Sajjan affair succeeds in wiping the Congress stain of state-sponsored genocide that took over 3,000 lives. It well may. This is incredible India , where gestures serve as actions.