Like everyone, I was ecstatic when the Indian cricket team became champions in Australia. Until I ran into some politicians. 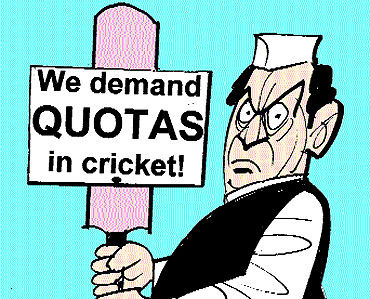 outlookindia.com
-0001-11-30T00:00:00+0553
Like everyone, I was ecstatic when the Indian cricket team became champions in Australia. Until I ran into some politicians. After listening to them, I became worried sick about how our cricket team could destroy India.

"Do you realise how many North Indians are there in this team?" the senior leader hissed. "By my calculation, there are seven in a squad of fifteen. That’s almost fifty percent! What about the rest? Don’t they deserve justice?"

"And mind you," chimed his junior colleague agitatedly. "So many from the North, but not a single player from the Northeast! What kind of justice is that?"

"That’s why poor Baichung Bhutia of the Northeast was forced to become a soccer star! You know how much more lucrative cricket is compared to soccer. Poor Baichung!"

"What bothers me is the example these cricketers are setting our children," said the senior leader with a worried frown. "They are all behaving as if they belong to one family! Not a single player is speaking up for his caste or community! What kind of India do they want to create? What kind of India will our children grow up in?"

"But they did manage to win the tournament," I said hesitantly.

"Winning and losing isn’t everything," the senior leader said sharply. "As Pandit Nehru said, we should play the game in the spirit of the game! Is winning a game more important than uniting the nation? Is that your spirit of the game? Huh? What about a regional level playing field? What about an inclusive society? What about creating an India of our dreams?"

"You are talking only about disparity in regional representation," the junior leader pointed out. "We are ignoring the even more crucial aspects of caste and community! Millions of people follow cricket. What are we trying to teach them? That social justice is of no importance?"

"I was coming to that," said the senior leader. "If cricket is going to propagate social injustice and regional discrimination...ban the game, I say!"

"That may not be necessary," the junior said. "I am sure our selectors will see reason. All that we have to do is to introduce a scientific, just formula to ensure proper reservation for each major region, caste and community for finding a place in our cricket team. We can introduce a bill in the next session of Parliament."

"We better," said the senior leader. "India’s future is at stake!"