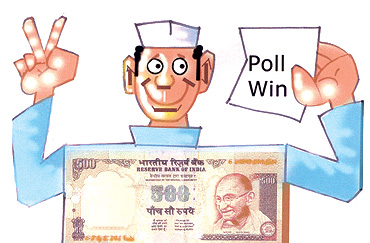 outlookindia.com
-0001-11-30T00:00:00+0553
At the start of the century, people hoped the world would enter a new phase of freedom and transparency. Seven years have passed. Things are worse. Dictatorships have not become democratic. Democracies are becoming dictatorial. Where does the fault lie?

Because of widespread public awareness in the information era, more and more people know what’s going on. But political accountability remains elusive. So what faith can people summon for democracy when they know that corrupt politicians rule them?

But India is not unique. Politicians worldwide are corrupt. One knows how the laws of politics work. In office, power brings wealth. Out of office, wealth brings power. This happens everywhere. Consider recent reports from a reputed British daily. London’s Guardian reported Russian political expert Stanislav Belkovsky claiming that after eight years in power, Russia’s president Vladimir Putin secretly accumulated more than $40 bn in private wealth. The same paper reported that Labour leader Peter Hain failed to declare tens of thousands of pounds worth of political funding when he contested the deputy leadership of the Labour party. Greg Palast, who has investigated stories for London’s Guardian and done assignments for the BBC, has described how the Clintons colluded with Musharraf for involvement in highly questionable energy deals in Pakistan.

These are current reports. From the past, much more dirt about world politicians can be dug up. Even top leaders of China are no exception. Their children are billionaires. They become rich through business. But where did they get the seed money to start the business? Communist nations allow virtually no private property. The leaders could only have acquired wealth through corruption. The US scene reminds us how profoundly wealth can influence elections.

People everywhere are victims. And politicians everywhere are the enemy. Rulers are corrupt. People know this well enough in the Internet age. Yet they are helpless. That is the problem facing the 21st century. And the problem is much bigger than Mayawati’s disproportionate assets.