Suffering wrongdoers earn fame, celebrity status and wealth. They are then rewarded for having suffered. Makes one wonder: is suffering good business? 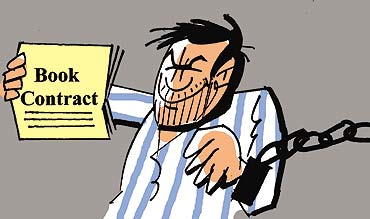 The world sympathises with Sanjay Dutt. He has been blessed with rewards all his life. And after his jail ordeal is over he will doubtless be showered with more rewards.

Mohammed Haneef spent 25 days of detention in Australia. He was suspected of being complicit in terrorism. He had lent his SIM card to a terrorist who was his cousin. Evidence was insufficient. The Australian police released him. Haneef reportedly gave an exclusive TV interview for handsome payment. The Indian government offered him a job. Had he been convicted, the rewards might have been bigger!

Individuals who suffer and go to jail are often compensated with rewards from society. Recall O.J. Simpson, accused of murdering his wife. His court case made him a world celebrity. He was acquitted for lack of evidence. He increased his fortune from a book he wrote about how he would have murdered his wife if he had done so.

Remember Monica Lewinsky who had a naughty dalliance with President Bill Clinton? That scandal made her a world celebrity. After the scandal...