As Presidential elections near, it's puzzling why so much attention is paid to a post which, through distorted perception, has been reduced to an empty ceremonial husk... 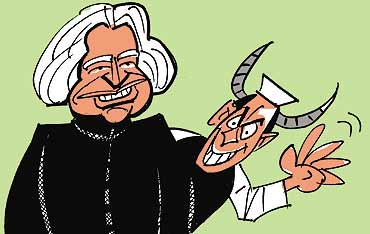 outlookindia.com
-0001-11-30T00:00:00+05:53
By mid-2007, India’s next president will be elected. Many names are being bandied about. The qualifications of several hopefuls are being assessed. It’s puzzling why so much attention is paid to a post which, through distorted perception, has been reduced to an empty ceremonial husk.

Since the fractured polity precludes any clear winner, there is talk about a second term for President A.P.J. Abdul Kalam. Speculative press reports indicate that President Kalam would not be averse to a second term if he emerges as the unanimous consensus candidate. One sincerely hopes the speculation is baseless. President Kalam is truly a wonderful human being. But he is a disastrous president. Of all the presidents in independent India, his record is perhaps the worst. He just does not have the will to take on the rogue political class.

A debate goes on about the powers of the president. But even the most conservative view that reduces the president’s powers to a minimum does concede that he must act to protect the Constitution. That is the oath under which he is sworn in. It bears repetition to recall that President Kalam abjectly failed to do it. The first time was when the central government, through an ordinance, dissolved the Bihar assembly. The Supreme Court ruled the ordinance unconstitutional. It could be argued, however, that Kalam had extenuating circumstances to mitigate his responsibility for signing and endorsing the government’s illegal executive action.

But this experience made his second lapse unforgivable. He deemed the Office of Profit Bill unconstitutional and returned it without signing, for reconsideration. Parliament accepted his objections. It appointed a joint parliamentary commission to address his concerns. The prevailing law would have unseated 50-100 MPs. This government could not have continued. The JPC has not held one meeting so far. However, President Kalam eventually signed this unconstitutional bill to make it unconstitutional law. The government continued in office with its unlawful majority.

Trinamool Congress MP Dinesh Trivedi filed a petition against this law in the Supreme Court. The petition is languishing there. Their Lordships seem busy with other matters. The unlawful government remains in office. Can anything be as brazen as this?

Well, yes. Responding to another petition seeking removal of convicted ministers from office, the government pleaded that the petition should be rejected. It argued that removal of criminal ministers would jeopardise the stability of the government. Who can deny that we live in an Incredible India?