Why do Indian Communists rant so much against globalisation when they actually seem to support it? 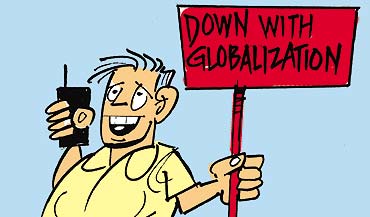 outlookindia.com
-0001-11-30T00:00:00+0553
Even as this is being written, the World Social Forum starts its annual five-day jamboree in Delhi against globalisation. It is being hosted by the Indian Social Forum. Globalisation, of course, is horrible. All kinds of people for all kinds of reasons fight it fiercely. And to be effective, they gather from all corners of the earth to globalise themselves.

I always thought of Karl Marx as an early globaliser. Workers of the world unite, and all that jazz. So it has not failed to puzzle me hearing Indian Communists rant against globalisation. Not corruption or exploitation, mind you, just pure and simple globalisation. Only now am I beginning to appreciate that actually they support globalisation. For them globalisation always takes pride of place.

That is why they passionately supported Iran’s right to make the nuclear bomb. Their pacifist ideals, of course, impelled them to oppose India’s nuclear bomb. With a global perspective, they knew Iran had to defend itself against America. With a national perspective, they knew India need never fear China again after China had forcibly seized all the territory it required from India.

With so much to worry about globally, they forgot altogether to worry about India’s justice system. Despite commissions of inquiry collecting ample evidence, not one politician has been indicted for the 1984 Sikh genocide. Despite ministers being named by intelligence agencies for aiding the pogrom against Muslims in Gujarat, not one has been indicted. Indeed, some named offenders continue to occupy office. Despite the Supreme Court as well as India’s Human Rights Commission confirming that over 2,000 Sikhs, 1,700 of them identified non-terrorist, from one district alone were killed in custody by Punjab police, not one politician has been indicted. For all this, one did not hear a single tweet from our comrades. Human rights are equal for all. But clearly, for some they are more equal.