Volcker. Amar Singh. Quattrocchi. Supreme Court on Bihar. The UPA government is solving problems so rapidly that soon there may be no problem. Because there may be no India? 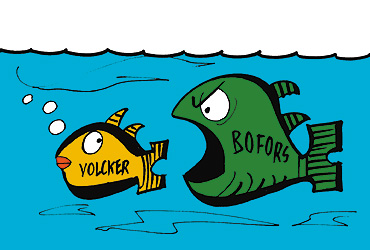 Once upon a time there was a Volcker report. It created a terrible problem. The media kept talking about it. The government huffed and it puffed. Eventually, foreign minister Natwar Singh resigned. But the problem didn’t end. The Congress party had also received money in Iraq’s oil-for-food programme. The media kept asking who pocketed the money on behalf of the Congress.

But then, thank goodness, the Volcker problem got solved. Amar Singh’s phone was tapped. It became the media’s new subject of debate. How could Reliance Infocomm, the service provider, give a parallel line to a private detective on the basis of letters from the joint police commissioner and the home secretary? Government spokesmen claimed the letters were forged. What proof was there that they were forged? Giving convincing answers became a problem for the government.

But soon this problem too got solved. Ottavio Quattrocchi’s London bank accounts were defreezed. The media forgot phone-tapping. It focused on Signor Quattrocchi. Who defied Supreme Court orders and sent the additional solicitor-general to London to defreeze the accounts? The CBI director said the CBI had nothing to do with the decision. But the CBI joint director said the decision was taken solely by his organisation. The law minister said it was anyway the right decision. The prime minister stated that nobody in the government interfered with the CBI because it was autonomous. The CBI works under the Department of Personnel which works under the prime minister. The media was buzzing with claims and counter-claims. The problem was becoming bigger and bigger.

But this problem, too, soon got solved—after the Supreme Court judgement came on the Bihar assembly dissolution. That took up all the media space. The court said Governor Buta Singh had subverted the Constitution and had...