Bullets On The Border 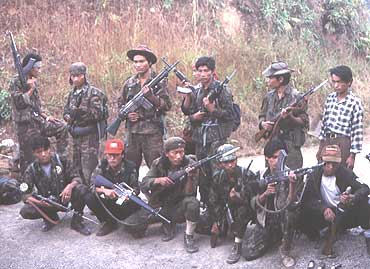 Whatever the peace signals coming out of the United Liberation Front of Asom (ULFA), New Delhi has okayed plans by counter-insurgency strategists to tighten the noose around Assam's most violent rebel group and the Naga rebels currently operating out of Arunachal Pradesh. This sensitive state, which shares its borders with China's Tibet region, Myanmar, Bhutan, besides Assam and Nagaland, has been a favourite staging ground for ulfa ever since the rebels were expelled from their bases in Bhutan by the Royal Bhutan Army blitzkrieg in the winter of 2003. In fact, ulfa's most potent strike unit, the 28th battalion or the 'Kashmir Camp', is located across the border in Myanmar, with advanced units on the Arunachal Pradesh-eastern Assam border.

Insurgency in Arunachal may not be of the same scale as in some of the other northeastern states, particularly Manipur and Assam. But what is significant and cannot be ignored is the area's strategic location and the fact that Beijing has chosen to be vocal about its claim on Tawang (an important seat of Buddhism) or for that matter the entire state. New Delhi would not like this frontier state to slide into the grip of separatist rebel armies with their potential to create unrest.

With counter-insurgency offensives in Arunachal Pradesh as their focus, the authorities are fine-tuning a plan to set up a unified command of the army, police and the paramilitary in the state. "I have recommended setting up of a unified headquarters to bring about better synergy among the army, police and the paramilitary to try and neutralise the insurgent activities in the state," Arunachal Pradesh's new governor, former army chief General J.J. Singh, told Outlook. Singh, who having served here is more than familiar with the region, knows its strategic importance, says the unified command, once approved by the state cabinet, would be headed by Chief Minister Dorji Khandu, while the General Officer Commanding (GoC) of the army's Tezpur-based IV Corps in northern Assam would be in charge of its operations.

An initiative like this had become imperative ever since ULFA managed to stage a comeback even after severe reverses. The rebels have been able to do so by changing strategies and adapting to the new environment. If earlier the group relied on selective killings and direct gunbattles with security forces, the focus now is on avoiding direct combat and protecting the cadres from the hands of the army, police and paramilitary forces. Instead hired men, who may not even be sympathisers of the group, do the killing for them. Points out Khagen Sharma, Inspector General of Police, Assam (Special Branch): "There have been instances where the ULFA has outsourced tasks like lobbing grenades or planting explosives to outsiders."

Political leaders in Arunachal Pradesh have welcomed the idea of a unified command to tackle insurgency. "Activities by insurgents from Assam and Nagaland have posed an internal security threat in Arunachal Pradesh," says Takam Sanjay, senior Congress leader and advisor to the Arunachal CM. "The local people here are disturbed and want peace to prevail." Sanjay's concern is not unfounded. One only has to look at some recent insurgency-related incidents in the state:

What amazes authorities is that the ULFA has kept itself afloat despite 400 of its cadres surrendering in the last 14 months. Clearly, the group has made fresh recruitments which is why the counter-insurgency apparatus is unable to lower its guard. And the fact that it has been able to attract new blood is proof of the ground support the group enjoys. This is why there are many who believe that a sustained army operation alone cannot solve the insurgency problems of the Northeast.

Assam's best-known peace broker, novelist Indira Goswami, is among those who believe that the policy of having an 'iron fist in velvet gloves' may look good on paper, but only a political initiative can bring lasting peace. "The ULFA is seeking sovereignty," she says. "That may or may not be conceded or achieved. But the government must listen to the rebels' demand and work out an acceptable solution. If a military solution was possible, the ULFA would have been crushed or gone from the government's radar during the past decade that Assam has been witnessing a military offensive under a unified command."

Goswami, in fact, admitted to having several telephonic conversations with Paresh Baruah, the elusive military chief of ULFA during the Assamese festival of Bihu. Writing a column in the local newspaper, she said, "The festive season always brings a lot of hope to the people. I feel doubly positive because of the tone and tenor of the ULFA leader (during the telephone conversations). If there is a time for starting talks, then it is now."

While many in the security apparatus agree with her sentiment and think a political solution would be the ideal one, others feel that the government cannot afford to let rebels operate from a sensitive border state like Arunachal. To them, setting up a unified command to fight insurgency is not a whim, but a necessity.