Bullets In The Blizzard

There is cynicism on the world's most formidable battlefield as India and Pakistan talk peace once again. For the troops, Kargil is still fresh on their memories. 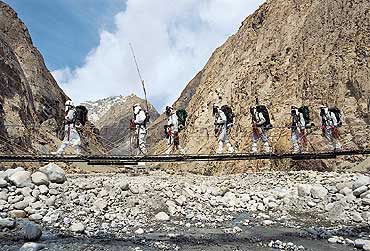 outlookindia.com
-0001-11-30T00:00:00+0553
Lean and wiry Rueben Thapa of the Gorkha Rifles doesn't like false optimism. "Shelling and firing carries on almost everyday. Where's the question of peace?" Nods Bhel Bahadur of his unit in agreement: "It's good to make peace, but can we trust the enemy? Even if hostilities end, we just can't vacate the glacier."

The Indian soldier on the frozen heights of Siachen is doggedly steadfast. And clear-headed. Despite the hostile environment which numbs your senses and has claimed more lives than the bullets, ask the jawan what he feels about the on-going Indo-Pak peace initiative, and his answer remains stoic and rational. "We must not lower our guard or vacate our positions, even if this enterprise results in something tangible. We simply cannot forget what happened in Kargil!" says soldier Razzak Khan, after returning from a three-month stint at 21,000 feet.

They go up the steep, snowy ridges, knowing fully well the dangers that lie ahead—the bottomless glacial crevasses which swallow humans within seconds, the treacherous avalanches, or the nightmarish "whiteouts" when snowstorms turn you blind. At 6,500 metres (21,360 feet), the body is tortured and the lungs starved for oxygen. But on the Siachen glacier, hit by repeated and fierce blizzards, maintaining positions for 19 years has come to symbolise the political and military resolve of two nuclear neighbours, trapped in an unyielding conflict.

This is a shared sentiment in this frozen terrain. Any talk of a mutual withdrawal of troops, the strategic futility of pushing soldiers up or converting Siachen into an international "peace park" open for adventure tourism is met with derision. The truth is that as long as India and Pakistan remain in a deadlock over Kashmir, the men will stay here. "There's mutual distrust, so we have to be careful when we talk peace," remarks Colonel R.S. Sidhu, Siachen's base commander.

Straddling the Saltoro watershed, this is the world's most formidable battlefield. Perched atop its rugged and deceptive ridges, both armies pound each others' positions with mortars and machine guns almost every day. The firing never seems to stop. And yet, Pakistan is not the only enemy. Survival here also means battling the other threats—the avalanches and sub-zero temperature. "The human body deteriorates at these heights, and compounded with the wind chill factor, it affects the appetite and metabolism," says Captain Yashwardhan Patel. "Only five per cent of the casualties and injuries are battle-related. The rest are entirely because of the climate," adds Colonel Sidhu.

Never mind then that a soldier is equipped with Austria-made Koflach snow shoes, expensive Gortex high-altitude gear and the Russia Stromeyer tents—these aren't enough cover against the vagaries of nature which have left hundreds dead. "Even the Swiss mountain dogs brought in by the army can do little if men are trapped below 15 feet of snow," says a captain. Stories of soldiers affected by high-terrain pulmonary and cerebral oedema, chillblains and frostbite stretch are common.

Considering that human survival here is tortuous, fighting the enemy requires an even greater daring. "That is why the men who guard these formidable heights are put through a rigorous training schedule for over a month before induction," says Major U.P. Yadav. Out in the heights, soldiers, holed in a complex web of trenches and bunkers, carry out routine duties like patrolling, line maintenance and night-vigil. "Life is tough here. One must have faith and confidence to dig in," says Subedar Bishan Bahadhur Thapa.

Seven Indo-Pak meetings to reduce the military presence on the Siachen glacier in the last decade has failed to reach any agreement. The deployment at these heights has been a highly expensive operation that has bled both the countries.And even if a broad India-Pakistan settlement is reached any time in the future, the resolution to the Siachen conflict looks hazy. Says a strategist: "Siachen is a metaphor for the bigger deadlock between Indian and Pakistan. It's a contest too painful to continue and too meaningful to end."

Quite Up To The Watermark