The links are so deep that often, it is impossible to distinguish the politician from the real estate man 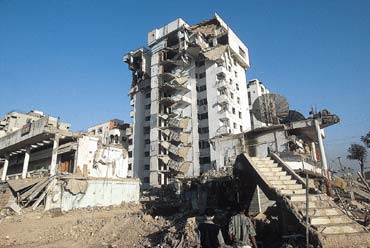 outlookindia.com
-0001-11-30T00:00:00+0553
In the first week after the quake, just as Ahmedabad municipal workers and other government agencies were about to blow up a high-rise building considered unsafe in the Satellite area of the city, Gujarat's powerful revenue and finance minister Vajubhai Wala got into the act. He ordered the officials to stop the demolition as it needed to be reviewed by another government agency before a final decision could be taken. The officials resisted and argued but beyond a point they knew they would have to relent, and they did.

What Vajubhai Wala did, of course, could not be considered extraordinary. Reason: anything is possible in Gujarat. Apart from his ministerial responsibilities, Wala also happens to be the biggest property developer and real estate promoter in Gujarat. So big that his talent at redesignating land not fit for housing as 'residential' attracted the attention of the bjp bosses, who then decided that the best place for him was the state cabinet. "It's no secret that Vajubhai owns half the land in Rajkot," says a source.

Outlook investigations reveal that the Gujarat finance minister has close links with Rakesh Shah, the builder charged in three cases of culpable homicide not amounting to murder (Section 304 of the Indian Penal Code). The cases were filed after buildings put up by his company collapsed, leading to large casualties. The Ahmedabad police has registered 55 cases against a number of builders. Of them, Rakesh is the biggest.

Admits one official: "The minister's links with the builder are well known. We are under pressure to spare him but the circumstantial evidence against him is so vast, we had no option but to act." The question is, how much longer are the authorities—themselves no angels—going to protect Shah? Forensic experts, municipal authorities and rescue workers examining the debris of Shah's collapsed buildings discovered that the base pillars of these had not been set deep enough, recycled steel used, the cement to sand ratio was virtually non-existent and every possible deviation from the original plan was done deliberately.

Investigations by Outlook reveal that literally a quarter of the Gujarat cabinet are backers of land sharks. Apart from Vajubhai Wala, the other political heavyweight-turned-builder is water resources minister Narottam Patel. According to preliminary inquiries, he has been linked to Girish Patel, another big builder charged for negligence and culpable homicide in two cases filed last fortnight. In Girish's case too, the structures he built were found unstable, there was no preliminary checking of the soil to examine whether it was stable or not, building bye-laws were flouted with impunity.

Sources say the corruption begins at the very top. Chief minister Keshubhai Patel's son Bharat Patel is regarded as one of the biggest property developers in the state and runs a flourishing multi-crore business, with able assistance, no doubt, from papa and his close men. And the irony of it is that Keshubhai himself rode to power on a strong anti-corruption plank. Officials here do not rule out the involvement of other members of the cabinet and it's a long list. Home minister Haren Pandya reportedly backs a former policeman, now a builder. As do Gabhaji Thakore, minister in charge of obc affairs, Babubhai Bokhiria, fisheries and civil supplies minister, urban development minister Parmanand Khattar, former health minister Ashok Bhatt, labour and employment minister Purushottam Solanki—himself once booked for rioting by the Srikrishna Commission in Mumbai—higher and technical education minister Bharat Barot, their close kith and kin and a clutch of top bjp politicians who head state government undertakings and who until fateful January 26 made no bones about their connections with the powerful builders' lobby.

But politicians cannot do much without the assistance of conniving bureaucrats. Leading the pack is the state chief secretary L.N.S. Mukundan himself and a number of other senior officials, some of whom are facing charges of defalcation and corruption in other cases. Education secretary Anand Mohan Bhardwaj; Sanjay Gupta, managing director of the Gujarat Petrochemical Corporation; S.K. Nanda, MD of the Gujarat State Finance Corporation; Ravi Saxena, MD of the Gujarat State Infrastructural Development Board and state industries commissioner Kirit Shelat—all are reportedly keen supporters of the builders' lobby and the new fly-by-night operators who have sprung up in the last decade. And their tentacles are spread wide. Delhi Development Authority chairman P.K. Ghosh, a Gujarat cadre ias official, has already introduced a successful Gujarat-based builder, Labh Constructions, on the Delhi circuit, which already has several suspect developers doing the rounds. Also connected with the builder lobby is Bhupendrasinh Chudasama, chairman of the Sardar Sarovar project and a political appointee.

The involvement of officials is never more evident than in the Sumangalam Cooperative Society case in Ahmedabad. The rules said that the housing society should not be used for commercial purposes. It said that flats could not be rented out, that only officials who didn't have properties need apply. Fifty-four top bureaucrats of the ias, including Mukundan, and some from the ips, decided to break the rules and presented patently false affidavits before the court. When the court did not agree, they went to the CM, who was in no mood to grapple with the high court and told his officers off.

Well-placed sources say the list of those involved is much longer and only a genuine investigation can bring out all the names. "I can tell you no one will be spared. The section we've applied (304) is solid. We are collecting evidence and that takes time. There is no point rushing ahead without adequate proof," says city police commissioner P.C. Pande, who adds that in some cases, Section 302 (murder) could well be applied if more direct evidence is available. Concurs state energy minister Kaushik Patel: "Take it from me. Builders will be booked, if any evidence is found against them."

The key question is whether such evidence would be available, if at all. The investigation itself is mired in red tape and has the potential for easy manipulation, should that be the intent. According to police commissioner Pande, cases have been lodged against the builder, the architect, the structural engineers and municipal authorities concerned, but rarely in one sequence. "In some cases, maybe the architect was right in raising objections, but the builder ignored it. In other cases, maybe the structural engineer was wrong in recommending a building that should not have been there. Our job is to sift through all this and then make out a fool-proof case," he says. Clearly, nailing suspects is not just going to be a prolonged one but given their levels of influence, a tall order.

When there is talk of corruption, can anyone beat the Congress? Former CM Chimanbhai Patel has left behind a sterling legacy. Perhaps going by the corporate trend, children of politicians in Gandhi's land have opted for real estate. Chimanbhai's son Siddharta is one of the biggest builders in the state.Party chief whip in the assembly Naresh Rawal, former deputy CM and pcc general secretary Narhari Amin (a stalwart of JP's anti-corruption movement in the '70s) and Amarsinh Choudhary have left the Gujarat Congress in a catatonic state to concentrate on developing property and business. "Maybe it is good for business but politically it is disastrous," quips a former party MP.

In a situation like this, the "near and dear ones" are having a ball. Labour and employment minister Purushottam Solanki's brother Hira Solanki—reportedly a fearsome cable TV don in Ahmedabad—is very active in the building business, as is Manuji Thakore, son of the state's obc minister; Bhima Dhula, brother of bjp mla Karsan Dhula, is a regular on the circuit, as is Bharat Barot's brother Atul. Atul has in the past been charged once with floating a bogus passport racket in Ahmedabad, before real estate became a more viable proposition. Other influential promoters: bjp mlas Madhu Shrivastava, a former and lone Samajwadi Party member Jethbhai Parwar, who is now with the ruling party, Jairaj Jadeja from Rajkot and Gangaram Tapu from Surendranagar, both high-casualty areas. "There are several other names which may well never be known in the public domain, thanks to the massive cover-up currently going on in Gujarat," says social activist Sarlaben Desai.

As reports of building collapses become public knowledge, the culpability of the top politicians and bureaucrats, mentioned in our list, in concert with real estate developers reads like a veritable scandal sheet. Consider:

In a political-social system as tightly sewn up as this, Gujarat is witnessing its own version of judicial activism. On February 5, the Gujarat High Court, in a suo motu special leave application taken solely on the basis of news reports, observed: "Earthquake is a natural calamity comparable to an act of god, but the collapse of a number of buildings at different places has put a question mark on the quality of construction and the quality of material used." Closely examining and quoting from a welter of reports that appeared in the national and local newspapers, the court has asked the state government the following questions:

In fact, the high court has taken off from where it had left before the quake. In a series of decisions that rankled the political class, it has been raising questions from time to time. When the court first took cognisance of the issue in September-October 2000, saying that there were too many illegal and unsafe constructions, the state government came up with a fantastic impact fee plan, demonstrating, in the process, just how close it is to the builders and land sharks. The mechanics of the plan: unsafe buildings could be made safe with the help of a fee that the builders would have to pay. After much protest from many of them, under the aegis of the Gujarat Institute of Housing and Estate Developers, the state government agreed to reduce the fine to a whopping one-eighth of what was originally proposed.

In January this year, the state government went a step ahead. In the face of stiff opposition from the courts and consumer activist groups, the state cabinet actually allowed the raising of the floor space index (fsi) of high-rise buildings by 40 feet in the 'A' category of cities (Ahmedabad, Surat and Vadodara) and 35 feet in 'B' cities (Rajkot, Bhavnagar and Jamnagar). Says Vikas Joshi, an architect: "In the last month itself, a number of penthouses have appeared atop high-rises, ignoring the most basic rules of the business." In other words, between the impact fee and the fsi clearance, the state government had not just authorised all illegal buildings but encouraged builders to go ahead with some more. The results are there for all to see.

The Paralysis of Peace