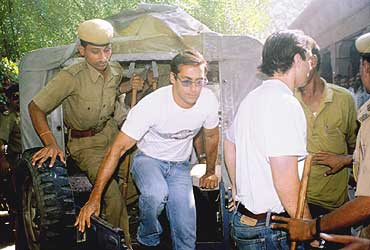 outlookindia.com
-0001-11-30T00:00:00+0553
It was mid-1994 when I received a phone call from a place near the Bandhavgarh Tiger Reserve. The scion of an erstwhile ruling family wanted his son to shoot a tiger to mark his coming of age, it was a family tradition. A tiger had been located, a bait had been tied, a machan built. The tiger was to be shot that very night. A flurry of phone calls to the district officials took place. The bait was untied, the machan dismantled and the tiger spared. I received a defamation notice from a lawyer of the family, but that is another story.

So what causes a Salman Khan, not royalty but a macho film star, to be accused of hunting black bucks in Jodhpur, and an erstwhile nawab of Pataudi to be embroiled in a black buck shooting case?

The answer goes back to the shikar tradition of the Raj days in India. Not much sweat went into ruling princely India. Time was killed hunting 'game'. Maharajas invited viceroys to shoot a tiger to curry favour. Wildlife sanctuaries were called "game parks", created largely to ensure better hunting for royals. Commoners were strictly forbidden from hunting here, on pain of stiff penalties, including death. Literature of 19th and early 20th century is replete with tales of hunting, a 'sport' with its own rules. Killing females was prohibited, not out of any kindness but because they'd provide the next 'game' crop.

Partition was the watershed for Nature India. Vast tracts of forest were cleared to settle refugees from Pakistan, taking away wildlife habitat. A population explosion followed. It was obvious that unless urgent steps were taken, India would lose all its wildlife wealth—in fact, the rich biodiversity as a whole. The saviour then was Indira Gandhi. The Wildlife (Protection) Act was framed in 1972 but it allowed some hunting under permit.

Most royals themselves reached the conclusion that hunting was no longer tenable, put down their guns and joined for conservation of wildlife. The first president of wwf-India was Fatehsinghrao Gaekwad of Baroda. Perhaps they wistfully hoped that if wildlife was protected, one day, limited sport hunting could be resumed.

This wasn't to be. Sporting firearms had remained with every gun licensee. Ex-rulers were given special concession and called 'exemptees'—they could keep their weapons without licence. And with industrial wealth transferred to Indians, a new class of hot-blooded rich young bucks emerged. Sport hunting, illegal though it had become, was the macho thing to do, since the belief was if you had money and connections, you were beyond the reach of law.

At the same time, rural India too had taken to the gun in a big way, since "crop protection" guns were issued freely to the green revolution's newly rich. They too wanted to ape the maharajas. Hunting for pleasure has thus been rampant almost all over India. Wildlife departments do battle poachers. There are sporadic successes, but overall this is a battle we're losing. The nouveau riche maharaja clones and the ex-rulers who couldn't get shikar out of their blood will probably balk at killing tigers, but will happily kill its prey.

So we have had an industrial family of north India who booked a forest resthouse for their friends and family for a Christmas Shoot a la the Raj, distributed guns and ammunition to guests to shoot all they could; dead and dying wild animals were found in the forest for weeks. In the early '90s, Sanjay Dutt was charged and subsequently acquitted in Karnataka in a leopard shooting case. The managing director of a Delhi company was charged with hunting in Hastinapur sanctuary in mid-'90s. A UP MLA served spotted deer meat in a banquet attended by the district administration. The Valmiki Tiger Reserve was almost cleaned out of prey species by an armed police battalion sent there to curb terrorists.Nagaland once brought venison to the India International Centre in Delhi to showcase its cuisine. The list is long.

The wildlife law itself is powerful enough and acquired more teeth in 2002. The law exists but the punishments for its violations are still not widely known, especially in the hinterland where wild animals are found. The frontline forest guards and foresters, even in sanctuaries and national parks, are not trained in how to use this law. Finally, the legal process is so choked that a court case takes more than a decade to get even the first judgement. Meanwhile, officers on the case are transferred or lose interest; witnesses go missing, die or are persuaded to change their statement. A small procedural mistake can kill a case; it need not but it does. And if you have the money, you have sharp lawyers pitted against a junior official and a half-hearted public prosecutor. No wonder that the conviction rate is somewhere between 1 and 2 per cent in wildlife cases with a little improvement in recent years. This law is not a real deterrent at present.

Will 'Tiger' Pataudi be convicted? I'm keeping my fingers crossed. Finally, only a court will judge and that's more than a decade away. The Raj is gone but not the shikar tradition and the adrenaline rush. In Hindi we say "Rassi jal gayi, bal nahin gaya". All is lost, but vanity remains.

(The author is a trustee of the Wildlife Trust of India and has been a wildlife professional for 15 years.)