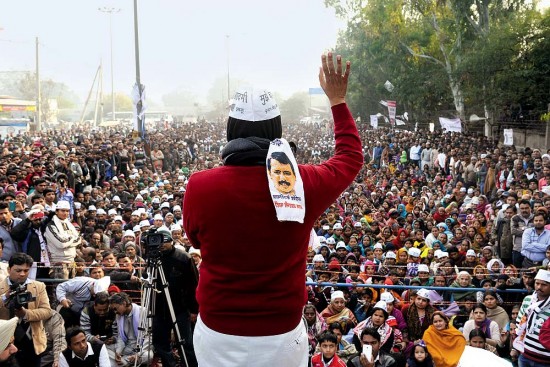 Twists & Turns Of The AAP

The venue is the Pacific Asia banquet hall at the Cascade shopping centre, one of the many malls in Pitampura, west Delhi. On the lunch menu are pakoras and soup as starters, standard vegetarian fare as the main course, finished off with ice-cream and sweets. The main item on the menu, however, is Aam Aadmi Party chief Arvind Kejri­wal, who makes a strong pitch to the traders and businessmen present, some of whom have paid Rs 20,000 per plate. The face of AAP makes a short speech before moving from table to table and finally settling to eat himself: “If I take money from a bijli baron like Ambani, they will say increase the prices of electricity. If I wanted that kind of money, I would not come to you. You invest in me, you invest in the future. I am from the income tax service. I understand your problems. I know how the raids are done just to extort money from small traders. They teach you how to bribe and not give taxes. I promise you the end of raid raj in Delhi and the lowest VAT in the country.”