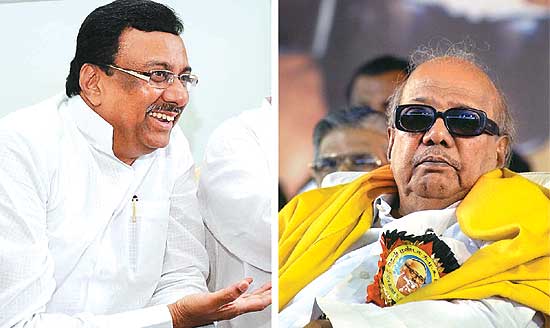 When Sonia Gandhi visits Tiruchi on October 9, she will have reason to despair. For,  nothing has changed in the state unit of the Congress, which went out of power in Tamil Nadu some 40 years ago. Senior leaders continue to bicker openly, and there seems little hope for resurgence in the near future.

But she’ll also have some reason to rejoice: her son Rahul has infused a new spirit into the party, and Youth Congress ranks in the state have swollen to 14.5 lakh. Perhaps this might have become a cause of anxiety for Tamil Nadu chief minister M. Karunanidhi, whose political tactics have so far been confined to hurling insults at AIADMK chief J. Jayalalitha, hobbling the PMK by arresting its leader Kaduvetti Guru for  alleged sedition, reducing Vaiko’s significance drastically and lavishing the electorate with freebies. But he seems to be  at his wits’ end in handling someone less than half his age and has so far been unable to find a counter-strategy to neutralise Rahul, who has made four visits to the state in 16 months.

Karunanidhi plays his overtures game again. As Raja comes under fire, he teases Congress with a Modi dalliance.

Now that Union minister for technology A. Raja is back under the scanner after a recent ruling from the Supreme Court, there is speculation on whether Karunanidhi is trying to make the Congress insecure by seeming to cosy up to the BJP. And who better to use as conduit than Gujarat chief minister Narendra Modi, anathema to the Congress? Perhaps that is why Karunanidhi dispatched a delegation headed by education and archaeology minister Thangam Thennarasu to meet Modi in Gandhinagar last week. The ostensible reason was to seek Modi’s help in getting back bronze statues of Chola emperor Rajaraja I and his queen Lokamadevi, reportedly acquired in the 1940s by the Sarabhai Foundation and housed in their private museum in Ahmedabad. The timing is the millennium celebration of the Brihadeeswarar temple in Thanjavur, built by Rajaraja Chola. Incidentally, Karunanidhi has invited Modi to participate in the celebrations, slated for September 25-26.

At the same time, he also continues to speak in two voices, as he often has. “He recently said the DMK and the Congress would decide jointly about alliance partners for the assembly elections, slated in about eight months,” points out a Congress leader, underlining his  point that Karunanidhi is unsure. Also, Rahul’s strategy of giving bickering senior leaders of his party a miss and focusing on blooding youngsters has rattled the DMK chief. TNCC president K.V. Thangabalu says, “More than 14 lakh people, including youth, women and Dalits, have joined the party.”

But Rahul and Sonia have to bring to an end  the internecine squabbles in the state unit, the latest being one between former minister E.V.K.S. Elangovan and Thangabalu.  Elangovan has demanded Thangabalu’s sacking. Before that, there was open war between supporters of home minister P. Chidambaram on the one side and Elangovan and G.K. Vasan, Union minister and son of Congress veteran G.K. Moopanar, on the other. This was over Elangovan and friends not being invited to the centenary of Congress leader C. Subramaniam even though the function was held in Erode, Elangovan’s home base.

Elangovan, who lost the last Lok Sabha election from Erode, has ben trying to make himself relevant by firing broadsides at Karunanidhi and the DMK. This even forced the Tamil Nadu chief minister to respond in Murasoli, his party’s mouthpiece. He described Elangovan as “confused” and said that allegations of corrupt practice would “strain the relations between the DMK and Congress”. What is significant is that the high command let Elangovan rant.