The plodding pace, and some subtle, almost abrupt moments can leave you disconnected. But, as you soak in the cowboy world, it envelops you entirely. 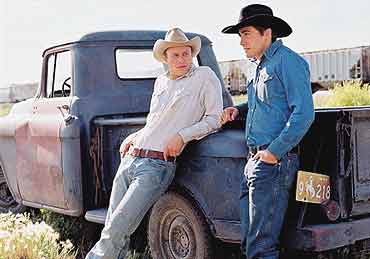 Why does clandestine love always seem so profound? My own favourite romantic films—Brief Encounter, In The Mood For Love and Before Sunrise/Before Sunset—are also all about furtive, fleeting passion. So does Ang Lee's Brokeback Mountain, based on Annie Proulx's story about forbidden love, also make it to that list? Yes, but not quite. Primarily because it's a difficult film to grapple with. The plodding pace, Ledger's thickly-accented, at times incomprehensible drawl, and some subtle, almost abrupt moments can leave you disconnected, particularly at the start. But slowly, as you soak in the cowboy world, it envelops you entirely.

Initially, Ang Lee deliberately and arduously plays on the sweeping, overwhelming Brokeback Mountain landscape. The rough and rustic surroundings, the bad food, the herd of sheep. In the midst of their duties, two cowboys—Jack Twist (Gyllenhaal) and Ennis del Mar (Ledger)—strike an intimate bond. Obviously, Lee is bent on subverting all conventional notions of masculinity and gay sexuality. Their first attempt at love-making is an epiphanic moment but one which confuses them. "I ain't no queer," says Ennis. "Me neither," says Jack. And so, as they decide to go their different ways, the subdued, inhibited Ennis breaks down in a dark corner. It's a heart-breakingly sad and painful moment and many more such poignant incidents follow. BM is an inherently tragic love story built on aching regrets and remorse and a continuing, forceful longing that its protagonists feel for each other despite the rough and tumble of other routine relationships. "I wish I knew how to quit you," says Jack.

What is remarkable about the film is how it doesn't politicise the homosexuality theme, transcends it to become the story of two people in doomed love. The two lead characters are wonderfully delineated. Ledger, in particular, is devastatingly good, specially towards the end. But one unsung performance that lingers on is that of Ennis's wife, Elma (Williams). Her initial shock, acceptance and the outrage at her husband, especially when she rebukes him for not getting home the trouts after a fishing trip with Jack: one only hopes this formidable show doesn't get lost in Hollywood history. Lee, for sure, won't.