Bring On That Patiala Peg

The run-up to polls in Punjab promises a carnival of ­excess, with AAP, Amarinder and SAD going all the way 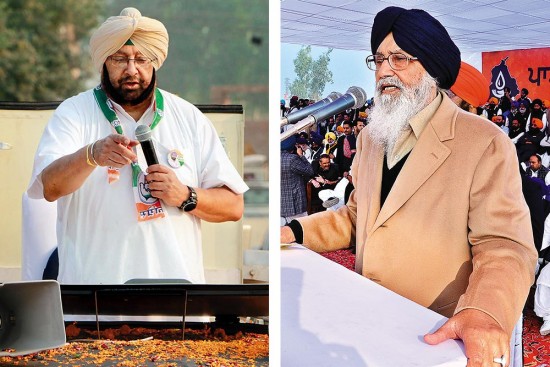 Simmering discontent in the Congress, an aggressive Aam Aadmi Party (AAP), ‘conspiratorial cabals’ of the Shiromani ­Akali Dal (SAD) and a whiff of rev­olt in the largely-missing BJP—the battle for Punjab has become as colourful as its famous Phulkari and as potent as the Patiala peg.

While wisecracks by Navjot Singh Sidhu and Bhagwant Mann have livened up the political landscape with their irreverent swipes against their opponents, contenders like General J.J. Singh and Sukhbir Singh Badal are scraping the wounds of militancy and Operation Bluestar, when army tanks rolled into Amritsar’s Golden Temple with Congress at the helm. The green-and-yellow mustard fields of Punjab have certainly not witnessed this kind of a three-way election before. With polling scheduled on February 4, all the parties are preparing for the last-mile dash.

Sensing an anti-incumbency mood aga­inst the Akali government, AAP is going all guns blazing, raising the issues of rampant drug abuse and corruption in the state. Party chief Arvind Kejriwal has pulled out all the stops to expand his footprint beyond Delhi and consolidate AAP’s position in the Punjab electoral landscape, where the party won four of the 13 Lok Sabha seats in 2014—its very first general election. AAP is targeting four lakh voters every day in an extensive door-to-door campaign, focusing on the Malwa belt, making it perhaps the most decisive factor in the elections. And yet the Badals of the ruling SAD, having latched on to the insider (Punjabi) versus the outsider (Haryanvi) narrative to corner AAP, have dubbed him “an outsider and an opportunist” flirting with pro-Khalistan elements. From the Punjabi Suba plank to the Sutlej-Yamuna Link canal, the Akalis are raking up all possible issues that divide Punjabis from Haryanvis.