Gohar's claim of a mole who sold India's war plans doesn't add up, say the men in olive Updates 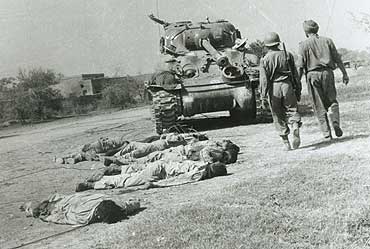 outlookindia.com
-0001-11-30T00:00:00+0553
Lies or disinformation: that is the verdict of the defence establishment on allegations made by Field Marshal Ayub Khan's son, Gohar Ayub Khan, that an Indian brigadier sold the war plans to Pakistan for Rs 20,000 before the 1965 operations. Both army headquarters and the defence ministry are veering around to the view that Gohar was either lying or is playing a game at a time when the peace process is gathering pace. Defence minister Pranab Mukherjee reflected the establishment's view at a press meet at Karwar. "It is difficult to believe that an Indian brigadier would divulge military secrets for money. The incident took place 35-40 years ago and we don't know whether the brigadier is alive or dead."

Back at army headquarters in Delhi, army chief J.J. Singh spoke with his director general of military operations, head of military intelligence and his military secretary. It's learnt that they all agreed that the charges were far-fetched. How could any brigadier have access to the entire war plans when in 1965 officers at various levels could see only part of the plan? After deliberations, army headquarters issued orders to carry out a discreet probe into the records of eight brigadiers who served in the 1965 operations. 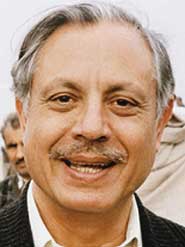 Those who served in the war express total disbelief at the allegations levelled by Gohar. "Impossible," says Major General Lachchman Singh (retd) who had served in the military operations (MO) directorate during the 1965 operations and also authored a book on the war. Singh, then a lieutenant colonel, served as a G1 officer in the MO directorate. "Nobody, including the director, military operations, who was a brigadier in those days, had access to the complete war plans," he says. According to Singh, plans were delegated to the command and the corps level with army headquarters acting as an overall coordinator through the MO directorate. "We only conveyed the broad directions of war to the command which could then be delegated to the lower formations such as the corps headquarters," says Singh. Which means, while western command would have the overall picture, the actual plans would be at the various corps headquarters. "And corps headquarters would only have access plans pertaining to their area of responsibility," adds Singh.

Perhaps the strongest argument against Khan's claims come from a man who had access to the war plans. Major General Narinder Singh (retd), an armoured corps officer, was the director military operations during the 1965 war. He told Outlook: "If they knew the plan, Pakistan could've used its air force to stop the movement of an armoured division and an infantry division from central Punjab to Samba and Jammu. This move had a major affect on the war. If the Pakistanis really knew about our plans they could have easily stopped us in our tracks. We would have been sitting ducks." Narinder Singh also claims that the operational plans that were available in the MO directorate was for the eyes of the chief and vice chief of army staff. "In fact, my career suffered because I refused to show the plans to the then deputy chief, Lt Gen K.P. Candeth," he revealed.

Narinder Singh admits there was a "leak" but only during the final stages of the war. "A brigadier told his wife that his division was moving from the Northeast to the war front. The information leaked out from the social circuit but had little impact because by the time the division arrived, a ceasefire had been declared."

Curiously, a day after Gohar's claims appeared in the Indian media, he issued "clarifications": he claimed the plans were actually "sold" way back in 1958. Back in Delhi, this raised more questions about Gohar's credibility. "It just doesn't add up," said Maj Gen D.K. Palit, the director of military operations between 1961 and 1964. "After the 1962 China debacle we changed everything, from our war plans to our military posture.There were incremental improvements in our force levels and equipment. So how could war plans allegedly leaked out in 1958 be relevant in 1965?" asks Palit.

Senior army officials also point to war literature coming out of Pakistan to prove Gohar wrong. Gen Mohd Musa Khan, the then Pakistani army chief, wrote in a book that Pakistan was surprised by Indian tactics. He said Pakistan retaliated in the Chhamb sector after the Indians stung them in the Tithwal and Haji Pir Pass areas. His army was caught unawares.

This is confirmed by the then western army commander Lt Gen Harbaksh Singh in his tome War Despatches: "With the successful pursuit of our operations in the Haji Pir bulge and Kishanganga...the enemy reacted sharply. In exasperation, they decided to stake their all on one desperate fling by launching an offensive with regular forces." Clearly, there were unexpected turns in the conflict. This would have been unlikely had the plans been leaked. These facts raise serious doubts about Gohar's claims, which many say, is a publicity stunt to sell his book, due to hit the market in December.