By pitting itself against the bureaucracy, AAP is undermining the very mechanism its government needs to deliver what it promised the people 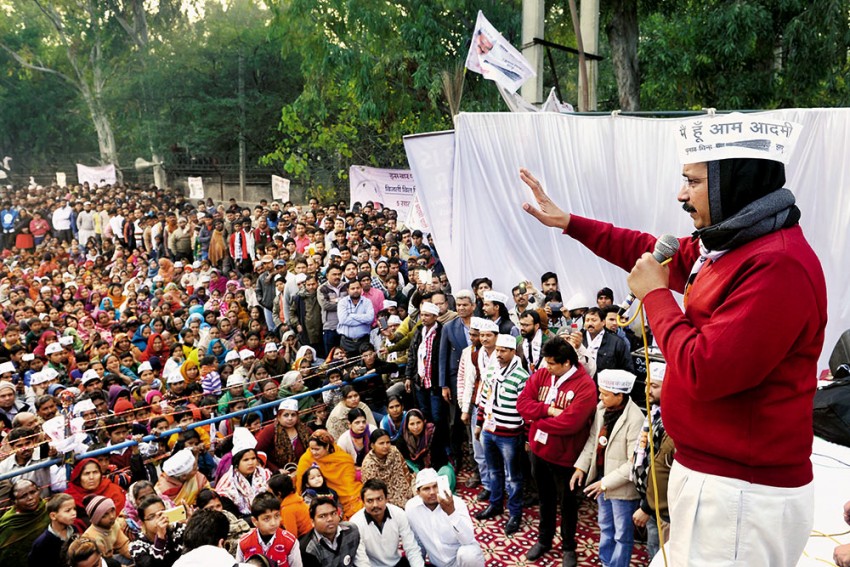 Selling The Change
Kejriwal’s AAP rode to power in Delhi on the back of big promises
Photograph by Jitender Gupta
M. Rajivlochan March 01, 2018 00:00 IST Breaking The Conveyor Belt 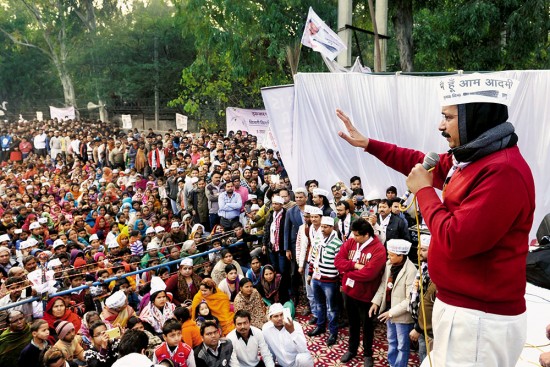 “Insaan se insaan ka ho bhaichara, yehi paigham hamaara”, that was Arvind Kejriwal’s message to the people of Delhi on February 14, 2015, soon after taking oath of office as CM. Three years on, the bhaichara bit lay in tatters—in a scene straight out of a desi mafia film, two of his MLAs allegedly roughed up the state chief secretary late at night in the CM’s presence. As if this was not enough, a day later, once again in Kejriwal’s presence, another MLA promised to do more of the same to any officer who seemed to be a hindrance to the AAP way of running the government.

Kejriwal and AAP had promised good governance to the people of Delhi, offering the hope of a way out of the mire Indian politics was stuck in. The people believed them and gave AAP a massive majority—67 seats out of 70 in the Delhi Vidhan Sabha. Today, increasingly it seems AAP has proved the believers wrong.

Far too much noise and far too little work—this has been the greatest weakness of Kejriwal and AAP.

The patina of Gandhism lay thick on Kejriwal as he took over governance. He had even proclaimed himself an ‘anarchist’ as he prepared to block the Republic Day parade in Delhi in 2014, little realising that Gandhi routinely condemned anarchists and those who followed the politics of disruption. Gandhi’s protests, especially his fasts, were undertaken only after all other means of convincing his opponents had been exhausted, and when he was fully convinced of the moral correctness of his cause and had made serious efforts to win over his opponents through dialogue.

This bit about the absence of morality, apparent in its penchant to break administrative rules, should have given people a hint of the core weakness that would haunt Kejriwal’s style of governance. Whether it was about contesting elections to student unions, or the elections in Punjab, or various issues of governance pertaining to Delhi, the AAP style of doing things remained amoral and designed to mislead people. The first victims of Kejriwal’s amorality were Yogendra Yadav, Prashant Bhushan, Anand Kumar and Ajit Jha, when they demanded the party not consort with those known to be corrupt just to win elections.

This weakness was also seen when AAP made overtures to people with separatist leanings during the Punjab assembly polls that followed a few months later. The popular verdict dem­onstrated that people did not care for that kind of doublespeak.

The basic ideas of ‘swarajya’ with which Kejriwal worked—in the sense of devolution of power to localities, giving them the freedom to decide on local issues of governance—had long had their advocates. Such devolution had been suggested earlier as an alternative to the governance impasse in which India’s public life was caught. When the AAP government tried to implement it, it ran into the constitutional provisions under which Delhi worked. It was lucky initially to have an accommodative chief secretary in K.K. Sharma, who enabled some work to be done for the schools, teachers and slum-dwellers. But AAP seemed to be going awry in other spheres—in dealing with real estate, ­appointments and contracts—even if one were to not believe allegations of money exchanging hands for government contracts.

AAP’s main problem lay in being unable to leverage its majority to create a broad-based consensus on governance issues. They forgot that the people would stand with them only so far as AAP delivered on its promises or looked significantly different from other parties. However, the only difference from other parties that AAP showed was in its ext­reme hostility to civil servants and its predilection to undermine institutional structures. Kejriwal’s government considered bureaucrats a hindrance rather than a tool to get things done. That fouled up the very first initiatives AAP took to cleanse the government of corruption. A trigger-happy anti-­corruption bureau of the sort AAP tried to set up in its early days in power was just the sort of thing that had the potential for extreme misuse. The central government quickly stepped in to clip AAP’s wings before any harm could be caused.

Even though people’s faith in AAP’s alternative, people-friendly model of governance was such that they came forth to cooperate in the one-off efforts at keeping Delhi clean, managing traffic, controlling pollution and running mohalla clinics, the party could not sustain the bureaucracy’s int­erest in such projects, nor leverage its popular support to overcome problems. The few fresh ideas AAP offered faltered due to lack of planning. The mohalla clinics are a case in point. The idea of providing good quality, affordable healthcare within a short distance from every home would be the dream of any public health professional. Though it won accolades from various inter­national agencies, AAP was unable to scale up the project. Of the 1,000 clinics planned, not more than 10 per cent could be set up. Lack of detailing and convergence with other programmes became major bottlenecks.

Due to poor governance over decades, there could well be a scam under every chair across India. But it is the government’s job to catch the scamsters and set the ball rolling. Public accusations are no substitute for solid bureaucratic work. Far too much noise and far too little work—this has been Kejriwal’s greatest weakness. 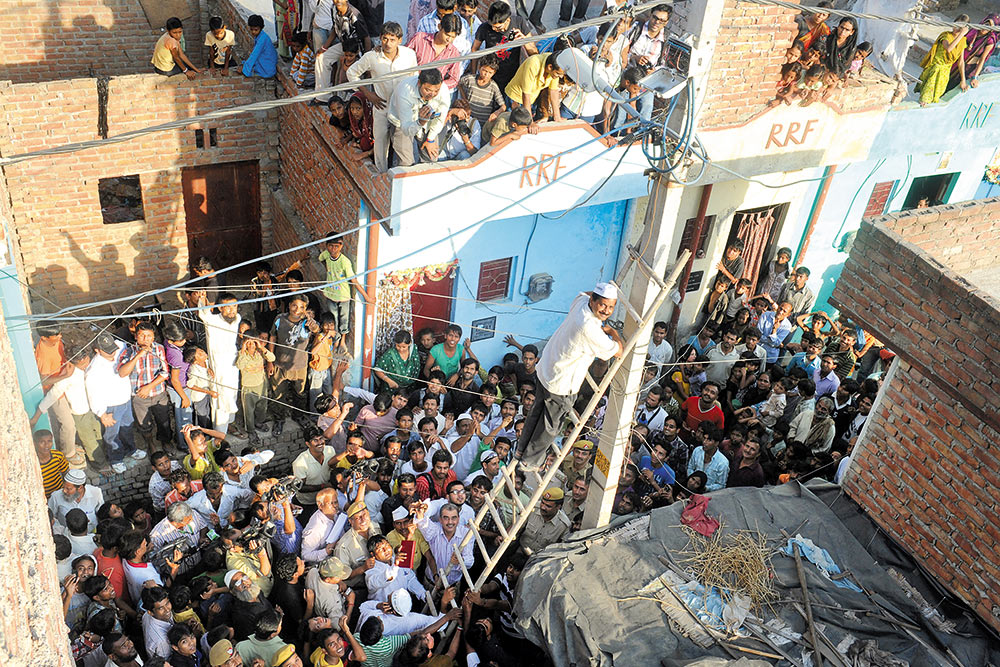 Kejriwal in action during AAP’s ­electricity tariff protest, ­before it won the Delhi polls

Bureaucracies are rarely goal-driven—the political leadership set the goals, while bureaucrats find ways to achieve them. Instead of using the bureaucracy as a tool of governance, Kejriwal got into frequent contestations with it. Ever since he penned his book Swarajya, Kejriwal, like Indira Gandhi, has been an advocate of a ‘committed bur­eaucracy’. This is a dangerous concept as it translates into a desire among politicians to extract from bureaucrats a commitment to the party in power rather than to the Constitution, the public good and a rule-based way of functioning. The next step has usually been for civil servants to become rent-seekers, who take a cut from citizens for each and every service they are supposed to provide.

Had AAP cared to unpack its agenda, it would have found that the surest way to make good on the promises to the people would be to strengthen institutional frameworks, so good services could be routinised. And the best way to undermine itself would be to undermine the institutional structures set up by the Constitution. But it has become quite uncommon to recognise that the government’s authority flows from the Constitution and not individual politicians.

The relationship between the minister and the civil servant does indeed have some inherent conflict as both cater to different constituencies—the minister to the public and the bureaucrat to rules. This situation gives rise to tensions that often find release in humour. Witness the great popularity of the British show Yes Minister.

The minister is, in effect, the chief executive of the department, exercising executive authority, which includes not just budget allocation, but also direct control over the postings and transfers of officials. For exercising that authority to get things done, however, the minister needs bureaucrats. Beating them up can hardly be the right way to achieve any goals.

Frankly, beating up government servants is a malaise that afflicts political representatives throughout the country. It has been happening, especially in mofussil areas, for some decades now. Engineers, doctors and personnel involved in dev­elopment administration have been frequently targeted. Kejriwal’s MLAs merely escalated matters to the chief secretary and that too in the nat­ional capital. Their complaints against bureaucrats have been twofold: one, that the rules are not transparent and clear; and, two, that there is little delivery on outcomes.

In their defence, bureaucrats argue that frequent transfers are a weapon used to harass them. In most states, however, the civil service board that recommends transfers to the chief minister is made up of civil servants. If these boards have failed to do anything besides carrying out ministers’ orders, they have only themselves to blame. Autonomy ceases to exist if it is not exercised.

The way ahead, as Mamata would ­counsel Kejriwal, is to work with the ­officers, not against them.

Ironically, the one tool bureaucrats have tended not to use against their victimisation is their ability to create documentation, which is an important means to enable a government to identify its weaknesses and improve service delivery to the people through institutional mechanisms. Over the years, however, the tendency in the bureaucracy has been to avoid creating paper trails. It does seem starnge, then, that the bureaucrats of Delhi have threatened the AAP government that they would start creating paper trails as a part of their protest. The Bihar IAS Officers Association had made a similar statement in February 2017, saying officials would take only written instructions. One would have imagined that proper paperwork is what makes the bureaucracy robust, and its absence is associated with its demise. Meanwhile, Delhi’s deputy CM has reportedly INS­tructed secretaries in the government to submit weekly written reports on the status of projects. Surely, that is what they should have been doing already, as a matter of course.

Indeed, talking to people, planning for results, detailing, regular audits and documentation are what the AAP government has been rather weak on. Sadly, the conviction that all these tasks are an essential part of institution-building has been seriously lacking in AAP. Good governance is all about strengthening institutional structures, but the institutions have been so seriously undermined over the years, a politician could believe that beating up a bureaucrat was a fair way to get results. The way ahead, as Mamata Banerjee would counsel Kejriwal, is to work with the officers rather than against them.

(The writer is professor of history at Panjab University, Chandigarh)

A Party That Lost Its Fig Leaf