Romance without the baggage? Indian movies are still grappling with the idea.

When Aditya falls in love with Geet in Jab We Met, a boy falls in love with a girl. For a Hindi film that is an uncommon thing to happen. Usually, when a hero and heroine fall in love, they carry with them the burden of something larger, either by way of a class divide, or the unpaid debts of an earlier birth, or perhaps the idea of modernity and tradition. To fall in love with someone else without such accompanying baggage is rare and, exceptions apart, a phenomenon of our times. We see it in Jab We Met where the girl does come from a mustard field-infested rural Punjabi background, but that in no way impinges on the choice she is faced with—whether to go with the boyfriend for whom she put herself on the line or with the new boy in her life. In Jaane Tu Ya Jaane Na, another recent romantic success, the protagonists carry no mythic weight; they are two friends who should be lovers and everyone else knows it; the film merely outlines how they find this out for themselves. In both these films, falling in love involves people who are grappling with the idea of choice itself, rather than agents of class or social background. 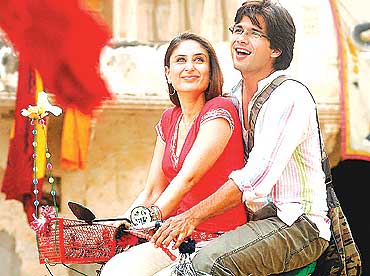 Shahid and Kareena in Jab We Met