The party is luring smaller ones to its fold 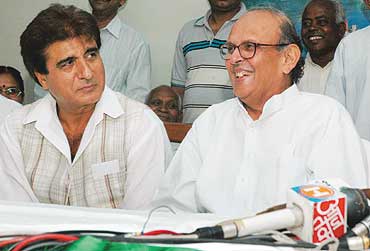 Can Vishwanath Pratap Singh and the Jan Morcha have a second coming? The creator of Mandal has issued a call in Uttar Pradesh seeking support for the Jan Morcha that’s emerged from his Kisan Manch. With V.P. Singh as its patron, and filmstar-MP-cum-SP-rebel Raj Babbar as its public face, the question now is: can the Jan Morcha chip away a section of votes in the UP polls slated for February 2007? V.P. Singh told Outlook: "A purely political front, the Jan Morcha will raise issues of that section which has remained unattended. Then there will be focus on law and order and problems of farmers, weavers and youth. The state government is snatching away farmers’ land in a big way. See what is happening in the Dadri power project, high-tech cities project, the Lucknow-Kanpur corridor."

Clearly, Singh still sees himself as a man with a mission. But the real attempt of the Babbar-Singh duo is to get a section of the Muslim votes. Indeed, the emergence of the Jan Morcha comes at a time when some clerics have floated a so-called "Muslim party", the People’s Democratic Front (PDF). The Uttar Pradesh political scene is certainly getting cluttered in the run-up to the assembly polls. Both the Jan Morcha and the PDF can at the very least further damage Mulayam Singh Yadav’s Samajwadi Party.

Says Shia cleric Maulana Kalbe Sadiq: "V.P. Singh has a good image. I have full faith in him because he has always worked for the welfare of people who have been denied their rights". The state’s Muslims—20 per cent of the population—are watching the political developments with interest. Says Nihaluddin, president of the All India Muslim Forum: "Both V.P. Singh and Raj Babbar agree on the issue that each section of the society should get equal benefits of development and for this Muslims should be considered a caste, not a religion." Nihaluddin’s outfit, a tiny Muslim organisation, plans to forge an alliance with the Jan Morcha before the UP assembly elections.

In fact, Muslims of all persuasion and gender are in great demand. Shaista Amber, the founder president of the All India Muslim Women Personal Law Board, held a meeting of her electoral committee in Lucknow on May 7, the same day that Babbar presided over Jan Morcha’s first-ever meeting in the state capital. Says Shaista, "We have to convince the women of an urgent need to take an active role in politics, which looks possible under Jan Morcha." She plans to gather thousands of women for Jan Morcha’s maiden public rally slated for May 30 in Lucknow.

The mega show will see leaders—instrumental in conceptualising the Third Front—brushing shoulders with each other. The aim: to provide a forum for all anti-SP and anti-BJP secular parties. Hence Laloo Yadav, Ram Vilas Paswan, CPI general secretary A.B. Bardhan are expected to address the rally. Besides, a number of small players like the Rashtravadi Communist Party, Bharat Samaj Party, National Loktantrik Party, Samajwadi Janata Party have already pledged support to the Jan Morcha. The Jan Morcha’s national president Raj Babbar says that the idea is "to get as many small groups together as possible". An understanding with the Congress or a post-election alliance with Mayawati’s BSP is not ruled out. But before pledging support to future victors, the Jan Morcha will have to ensure its own survival in the overcrowded UP arena.

The Flesh And Spirit Cocktail