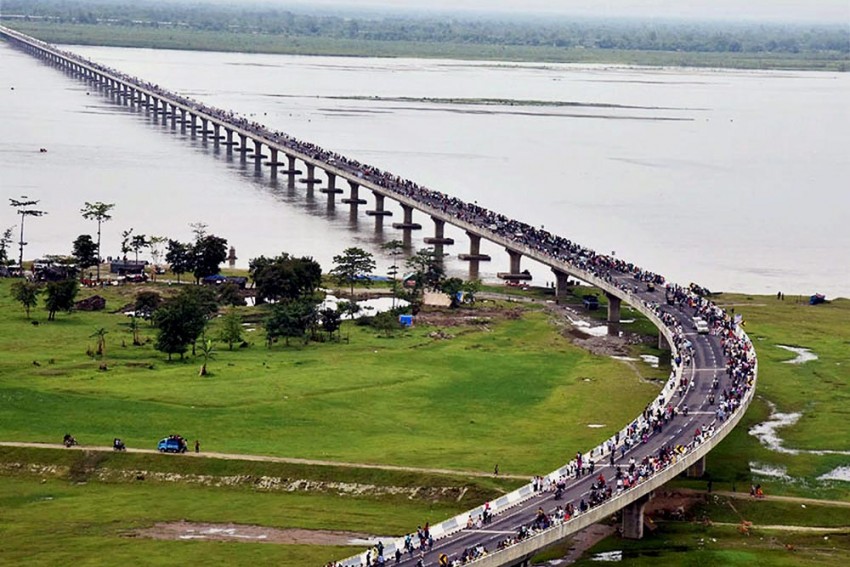 Closing The Gap
The Dhola-Sadiya bridge in Assam
Photograph by PTI
Bhavna Vij-Aurora August 17, 2017 00:00 IST Border’s An Infra-Push Away 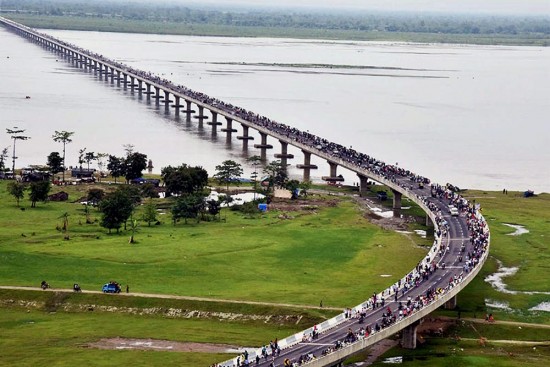 On May 26, two weeks before the stand-off over Doklam between India and China began, Prime Minister Narendra Modi inaugurated the country’s longest road bridge. The 9.15 km-long Dhola-Sadiya bridge across the river Lohit in Assam will vas­tly improve road connectivity to the border state of Arunachal Pradesh. Built at a cost of Rs 2,056 crore, the bridge is designed to allow the passage of the Indian ­Army’s 60-tonne Arjun and T-72 main battle tanks.

Barely a week before the inauguration of the strategically important bridge, home minister Rajnath Singh had chaired a meeting of five Himalayan states in Gangtok to discuss the development of roads, bridges, railway lines and other infrastructure along the 3,488 km-long Sino-Indian border. This was in the wake of India’s refusal to participate in Beijing’s ‘One Belt, One Road’ conference and the diplomatic tussle over the Dalai Lama’s visit to Arunachal Pradesh.

While it is evident that India is in no mood to kowtow to China, the government is intent on improving road and railway connectivity in border areas on a war-footing to allow quick mobilisation of troops and a stronger defence barrier. Ever since it came to power, the Modi government has been focusing on improved connectivity with the Northeast due to strategic and political reasons. Rising tensions with China have only made the government bolster the efforts.

“With China getting more and more aggressive, it is time we strengthened our physical infrastructure to defend our territory,” minister of state for home Kiren Rijiju told journalists recently. Surveys for four new strategic lines, identified by the ministry of defence (MoD), have been undertaken by the railways since the Sino-India eyeball-to-eyeball confrontation began two months ago. Funded by the MoD, these strategic lines are likely to be used mainly by the armed forces.

One of these—the 498 km-long Bilaspur-Manali-Leh line—is touted to become the highest in the world, overtaking China’s Qinghai Tibet railways. On June 27, railway minister Suresh Prabhu inaugurated the final location survey for the project, estimated to cost Rs 158 crore. The line will connect all important locations between Bilaspur and Leh—Sunder Nagar Mandi, Manali, Tandi, Keylong, Koksar, Darcha, Upshi and Karu. Owing to the tough terrain, the survey, being underta­ken by RITES, is scheduled to be completed by March 2019. “It is difficult to give a deadline for the completion and commissioning of the line,” says a senior railway official. However, once it is operational, personnel and equipment will be transported far more easily to the strategic military base of Leh.

The other strategic lines for which the surveys have started are Bhalukpong-Tenga-Tawang, North Lakhimpur-Bame-Along-Silapatha and Pasighat-Tezu-Parsuramkund-Rupai. Even as the funds for the strategic lines will come from the MoD, the railway ministry is also executing projects worth Rs 90,000 crore in the Northeast to put the creaky infrastructure along the Line of Actual Control (LAC) on track. These include surveys for seven new broad-gauge lines—594 km-long in all—in Arunachal Pradesh alone. Projects worth another Rs 3,000 crore are being implemented in other Himalayan states, including Jammu and Kashmir, that share a border with China. While the effort is on to connect remote mountainous areas by rail link, the ministry of road transport and highways is also working towards the avowed goal of “seamless Northeast”. It has set a target of awarding projects worth Rs 1 lakh crore in the next five years in the region. The implementation of the road projects has been entrusted to various agencies, including the Border Roads Organisation (BRO) under MoD, the National Highways Authority of India (NHAI) and the relatively new National Highways and Infrastructure Development Corporation Limited.

As areas like Tawang and Bame near the LAC are likely to be connected by rail, work is in progress on a two-lane trans-Arunachal highway too. Scheduled for completion by 2021, it is planned as a trunk route of 1811 km, linking Tawang at Arunachal Pradesh’s north-western tip to Kanubari at its south-eastern end, and finally joining NH-52 near Akajan beside Bogibeel bridge near Dibrugarh in Assam. The 4.9 km-long Bogibeel bridge, under construction for the past 15 years, is poised to become the longest rail-cum-road bridge in the country. Likely to be commissioned by March 2018, the bridge across the Brahmaputra will be of prime strategic importance as it will enable the army to take men and supplies from its Dibrugarh base to the Sino-Indian border.

Up north, the NHAI’s all-weather road project to connect Jammu and Srinagar with Leh through Zojila pass. In April, Modi inaugurated the longest road tunnel between Chenani and Nashri on the Jammu-Srinagar national highway, which cuts down the journey between the two cities by 30 km. “The Jammu-Srinagar stretch will have 15 such tunnels, bringing down travel time from 12 hours to six,” says a spokesperson in the ministry of road transport and highways. “The aim is to have the entire stretch open round the year. Now the Srinagar-Leh stretch is closed half the year due to snow.”

“Roads are a precursor to development and prosperity, ­besides being ­critical for combat power in the mountains,” says Gen Bikram Singh.

Work is in progress on a 3.5 km-long tunnel near Sonmarg, and likely to begin soon on a 9 km-long one at Zojila pass, which sometimes come under snow as deep as 25 feet. The tunnel will be a tactical asset and greatly enhance the ease of troop movement. “The tender has been awarded. The PM will lay the foundation stone either in August-end or early next month,” says the spokesperson. “Now the roads are open only from June to October. During this time, the army convoys move mainly to supply rations, which need to be stored for the winter months when the roads are closed. The working period for the armed forces is very limited. This needs to change urgently.”

Former army chief General V.P. Malik agrees that border infrastructure need to be built on an urgent basis. “Unless the armed forces are adequately mobile, it is not easy to defend these areas. Accessibility of remote areas is a must for defending them,” he tells Outlook. Pointing out that road projects in the region have had a poor record of implementation and no road has come up except one to the border in Lohit, the former army chief says, “The BRO has not been functioning well. Funds have been an issue. Timelines have been overshot. It is imperative to build roads and we have to do it as soon as possible.” Taking the government’s promises of building railway lines and roads along the border soon with some scepticism, he says, “The proof of the pudding is in the eating. Unfortunately, past experience has not been very good. Let’s keep our fingers crossed.”

Another former army chief, though, is optimistic. “The terrain is arduous and treacherous along the border,” says General Bikram Singh, who once headed the Eastern Command. “Laying roads in the mountains is a challenging and time-consuming process. At places, the soil is such that the roads need constant maintenance. Vast stretches get washed away with every rain. Labour issues and non-availability of local resources keep the contractors away, hence the BRO has to take on most of the work.”

General Singh believes things are changing, given the government’s focussed commitment and the realisation that developing infrastructure is crucial for ensuring effective defence and territorial integrity. “Logistics infrastructure—advance landing ground, helipads, ammunition dumps, staging areas and so on—to support combat operations are being given priority,” says General ­Singh. “The earlier school of thought precluded the development of border areas on a somewhat misplaced premise that the adversary would exploit it for launching offensives. Thankfully that got shelved in the early 1980s. Roads are a precursor to ­development and prosperity, and infrastructure—both operational and logistical—are critical for launching and sustaining combat power in the mountains.”