Shades of pacifism and fatigue on a canvas of violence 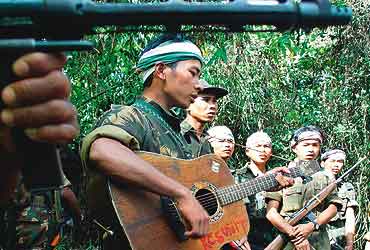 outlookindia.com
-0001-11-30T00:00:00+0553
India’s Northeast, which now officially includes the eighth state of Sikkim, has the dubious distinction of being home to Asia’s longest-running insurgency. The Nagas under A.Z. Phizo began an insurrection against the newly-formed Indian nation way back in 1956. Since then, it has spawned dozens of similar protests across the region, built around a sense of alienation and ethnic-cultural difference, that stay on the periphery of national consciousness. At last count, there were 30-odd banned insurgent groups in the region. Through the ’90s, some 11,000 died in insurgency-hit Assam, Manipur, Tripura and Nagaland.

Going strictly by numbers, Assam continues to bleed most. Till end-September, over 300 people had been killed this year. But numbers can be deceptive. Unlike the mid-’90s, insurgency no longer dominates headlines or people’s lives, which must be worrying for the two big outfits here, the ULFA and the NDFB. The Bodos are trapped in a seemingly intractable turf war against mainstream Assamese and ‘outsiders’ such as the Bengalis and even tea estate labourers from Jharkhand. The ULFA, formed in 1979 around the idea of homeland Ahom, virtually ran a parallel regime in ’88-90 but over the years was seen to degenerate into mere extortionism: the latest instance came last week when it demanded Rs 2 crore from HLL. The company refused, and upped security. CM Tarun Gogoi says his regime’s biggest plus is this changed mindset: "There used to be an uproar when a militant was shot down earlier. Now, the people themselves catch militants." Still, there are over 3,000 cadre of both outfits hiding in the jungles of south Bhutan believing their ilk can only prosper outside the Indian Union.

Manipur, in a qualitative sense, is the worst-hit state. There are at least 18 prominent militant groups. Rivalries often lead to greater violence—kidnappings, killings are commonplace. The militants run a ‘parallel government’ levying ‘taxes’ on people, government officials and businessmen. Some groups like KYKL have become vigilantes in their attempt to ‘cleanse’ Manipuri society of ills like the drugs-AIDS complex and to preserve the state’s unique culture.

The state with the oldest insurgency, Nagaland, looks normal in comparison after a ceasefire pact with the NSCN’s Isak-Muivah faction: the unfinished agenda being ‘Greater Nagaland’ which impacts across the region. (In fact, Manipur is in turmoil again after the arrest and subsequent release of 13 NSCN-IM cadres in the state on October 6). Bitter fights with the Khaplang faction too still preclude peace. But the popular mood could be gauged when two NSCN-K men were lynched and the houses of top leaders burned in Mokokchung in September after a student’s death at their hands.

Tripura has over the years seen its indigenous tribal population shrinking, a root cause—with abject poverty—of militancy. The state has been beset with killings and kidnappings over a decade with the two big outfits, NLFT and ATTF, on the warpath against Bengali dominance—a reaction was seen in the formation of a Bengali ultra group, UBLF. Says additional DGP Pranay Sahay, "The NLFT tried to influence the February assembly polls but failed. Now they’re targeting villages that voted Left."

Meghalaya, with two active insurgent groups, still sees hostility. Arunachal Pradesh is peaceful relatively but security experts warn that the NSCN-IM is making inroads. Mizoram, where the Mizo National Front—an underground outfit for 20 years—is into its second term in office, is the sole state here which has left behind its insurgent days.