Confucian China turns dragon only when poked. Can India be belligerent? 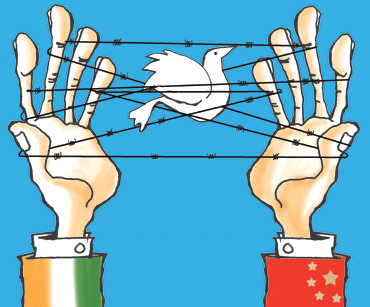 outlookindia.com
-0001-11-30T00:00:00+0553
Prime Minister Manmohan Singh has sought to curb the appetite of the media for 'results' by describing his maiden visit to China as merely a "return visit" following upon those of premier Wen Jiabao in 2005 and President Hu Jintao in November '06. It's, however, anything but a formality. Whatever the foreign policy officials may have envisaged when planning it, the visit has been overtaken by recent events. The last few months have seen a palpable growth of discomfort along the Sino-Indian border. And in the last few weeks, Pakistan has begun to slide towards chaos, and bids fair to become a nursery for new threats to the stability of both countries. Neither of these challenges can be met through public diplomacy.

The rapid weakening of the Pakistani state poses a common threat to both China and India. In India's case, the threat is obvious: if the jehadis succeed in reducing Pakistan to chaos, India will be next in their firing line. China too has its Muslim minorities, and some of these have already been infected by the Islamist virus. Chinese and Indian leaders therefore need to devise a common strategy to shore up the state in Pakistan, and to contain the spread of jehadi violence. This will not be possible without a major change of mindset in Beijing.

That mindset was born out of its deep distrust of Indian motives for offering asylum to the Dalai Lama. It led to the border conflict of 1962, and underlies the failure to resolve the border demarcation issue today. During the past 15 years, India has done all it can to allay China's distrust. It succeeded to a large extent when it explicitly recognised Tibet as a part of China during Wen Jiabao's 2005 visit. That led to the drawing up of an 11-point roadmap for creating a framework for the demarcation of the border. Since then there have been at least two more rounds of talks, but little overt progress.

The calm of recent years has begun to fray at the edges. Days before President Hu arrived in New Delhi, the Chinese ambassador said his country regarded the whole of Arunachal Pradesh as its territory. In May this year, the Chinese refused to issue a visa to an official from Arunachal Pradesh. The last several months have also seen an increase in the number of incursions by Chinese troops.

While the hawks in Delhi regard these as fresh proof of China's growing self-assertiveness and advocate greater military preparedness, the doves believe the envoy's remark was either a repetition of a formal position or a personal indiscretion. They are harder put to explain the refusal of the visa and the military incursions, but cite Chinese leaders' many assertions that they will not allow the border issue to hinder the growth of political and economic ties with India.

In fact, both interpretations are wrong. The ambassador's remark was a calculated indiscretion designed to convey a message. The denial of the visa was a reminder, and the border incursions were neither accidental nor the acts of over-zealous local commanders. All of them form part of the same message: 'Please don't think that this issue can be resolved by glossing over it.'

But it would be equally wrong to conclude that China is spoiling for a fight. China has used force in only three of a score of border disputes, and settled most of the remainder peacefully. So what does its impatience signify? The answer may lie buried in the profound impress of Confucian thought upon Chinese statecraft. Two central features of the 'imperial' Confucianism that evolved during the Han dynasty were an identification of reason and justice with virtue in the emperor, and an aversion to the use of force in the state's dealing with its subjects. The virtuous emperor, its philosophers maintained, would enjoy the 'mandate of heaven' and would therefore not need even an army, because his subjects would obey all of his dictates voluntarily. By the same token, the need to use force to maintain order in the realm would reflect a failure of the ruler to abide by the canons of virtue, and would lead to his loss of the mandate of heaven. Over two millennia, every successful peasant rebellion in China has been preceded by the loss of this mandate.

Transposed to foreign relations, imperial Confucianism binds the Chinese state into looking for a peaceful resolution of disputes so long as the other party also abides by the canons of reason and virtue. Coercion becomes justified only when the other party becomes 'unreasonable'.

China's growing impatience suggests it's coming to this conclusion about New Delhi. The way to deal with this is not to cite international law, or pass resolutions in Parliament asserting that Arunachal is an integral part of India. It is to concede that the Chinese would not be making the claims they are making if they did feel they have reason on their side too. So, the answer lies in compromise and face-saving. We have found, to our immense cost, that compromise on border issues is so very difficult in a democracy. That's why we once went to war, and suffered defeat—and humiliation.