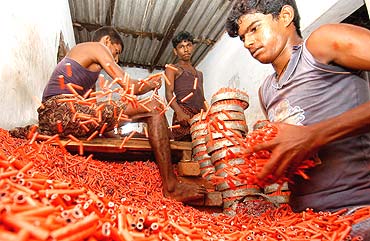 It's a rite of passage every girl should go through—celebrating sweet sixteen and all that it means. But for Shrishakti, a

cheerful and feisty 16-year-old, and others like her who work in the 620 factories and 3,000 match units around Sivakasi (and another 6,000 unlicensed units), it means working from 8 am to 6.30 pm so that others can blow up fireworks to celebrate events like Diwali.

Since the millennium, it's not just Diwali that is the festival of light and sound. Ganesh Chaturthi, Dussehra, even Christmas, Bakri Id and Mohurram see the sky lit up with sparkling colours, keeping hands busy in this Tamil Nadu town all the year round. Throw in New Year, cricket matches and India's ubiquitous elections and marriages, and it's always boomtime, literally, for the fireworks capital. The numbers reflect the trend: this year's turnover of all the Sivakasi factories taken together is Rs 700 crore, compared to around Rs 400 crore prior to 2000.

The good news is that the higher turnover is not translating into larger numbers of small children flooding the Sivakasi factories. On the contrary, after the world protested against child labour, children under 14 here are largely going to school, not working in factories. This is reflected in high enrolment, and in some cases, even waiting lists, at the 28 schools here. Thirteen of these have just come up in the last 10 years. More good news is that though Sivakasi is crying out for infrastructure like roads and sewage management, it does not neglect tertiary education: there are eight colleges, including an engineering and a pharmacy college.

Wandering around Sivakasi, we found six boys under 14 loitering near a fireworks unit but it appeared they were at a loose end because of school vacations and not working at the factory. "If one of our members is caught using children, we throw them out," says A.P. Selvarajan, president, the Tamil Nadu Fireworks and Amorces Manufacturers' Association. "Twenty-five years ago, children were used to make oosi pattas (needle crackers, literally) because they had nimble fingers and the demand was for 100 kg. Now we get adults to make them and only 25 kg are produced annually." The big factories mark NCLU—No Child Labour Used—on the firecrackers they sell, he is quick to point out.

The NGOs working in this area corroborate his story. Younger children, they say, largely go to school and 14-plus kids who work in the factories go to bridge schools after work to catch up with their education. A survey of seven villages by the NGO World Vision, which works in 30 villages around Virudhanagar, near Sivakasi, found that of 289 working children (35 per cent boys and 65 per cent girls), only 8 per cent were in the 6-12 age group. Forty-four per cent were in the 13-16 age group and 48 per cent in the 17-18 age group.

The question to ask, of course, is this: why are children over 14 still working at these factories? The answer is that although the United Nations Child Rights Convention considers under-18s as children, the Indian government defines children as being under 14 so factory owners are not threatened with closure for employing those above 14. Factory owners and contractors pick these teenagers because they are cheap (Rs 40-50 for a day's work), come with oodles of enthusiasm and, therefore, are very productive. Women too are preferred for their diligence and general work ethic. They come as cheap as the children, unlike the men who get Rs 80-90 per day. Almost all the employees in the match units and 60 per cent of those in the fireworks factories are teenagers and women.

Teenagers like Mahendran, an eighth class dropout with illiterate parents, cut red-coloured tubes to be packed with explosives and a wick all day long at a unit in Vilampatti. Subbutai, 70, assembles matchboxes. "Earlier I used to make money by getting produce from the forests, but they've all dried up. I have three married daughters but they are in no position to help," she says.

The factories, of course, still neglect their employees in a myriad ways. Although only four people are supposed to work in each of the sheds dotting the manufacturing units, contractors and owners pack 8 to 10 to a shed. They do not invest in training and safety procedures, says A. Kadhir, executive director of Evidence, a Madurai-based human rights group which has long been demanding a white paper so that safety norms can be evolved for this hazardous industry. (There were 1,835 small accidents and 40 big explosions here in '04 alone). Children do not get compensation for injuries sustained during accidents. Evidence, which carried out a fact-finding mission in August after the Pepsi Fireworks factory explosion killed 10 persons, found that teenagers Ganesh, Savithri and Muthulakshmi had gone back to work after recovering from their injuries. "They were promised Rs 5,000 as compensation but it did not come. They did not fight because they would be laid off, which would make them unemployable as contractors gang up," says Kadhir.

But Shrishakti is not complaining. "I did not like to study, so I came here to work," she says happily. A fifth class dropout, she is the life of this match-making unit in Kiliyampatti, where women sit in four neat rows stacking matches in boxes all day long. Her friends, other women who are more than twice her age, like having her around because she is a livewire. "We all are willing to chip in for her education but she won't go," says Muthyalu.

Shrishakti's is the classic Sivakasi story. She is one of six children. Her older sister is married and a younger sister still too young for school. Her parents also work in the fireworks business (which employs one lakh persons directly and nearly two lakh indirectly in this agriculture-deficient region). They felt it was better to educate the boys and, as a result, one brother is studying engineering, two others go to school. They hope their sons will join the IT industry and change their lives.

It's already happening, says Selvarajan, who is a partner in Sri Kaliswari Fireworks which has 20 factories employing 6,000 persons and a Rs 75-crore turnover. While he learnt the trade because he grew up around the factory, his children are not into the business like many educated children here. Selvarajan says he has lost 5 per cent of this workforce this year alone (other proprietors have lost up to 20 per cent) to the IT industry and to Tiruppur where the garment export business brings in Rs 1,100 crore annually. "They offer better environment and salaries," says Selvarajan. He predicts that in five years mechanisation will replace humans in Sivakasi. And allow Sivakasi's teenagers to be teenagers.