Boom Time Is Back

After three years, the market celebrates this festive season with bigger sales 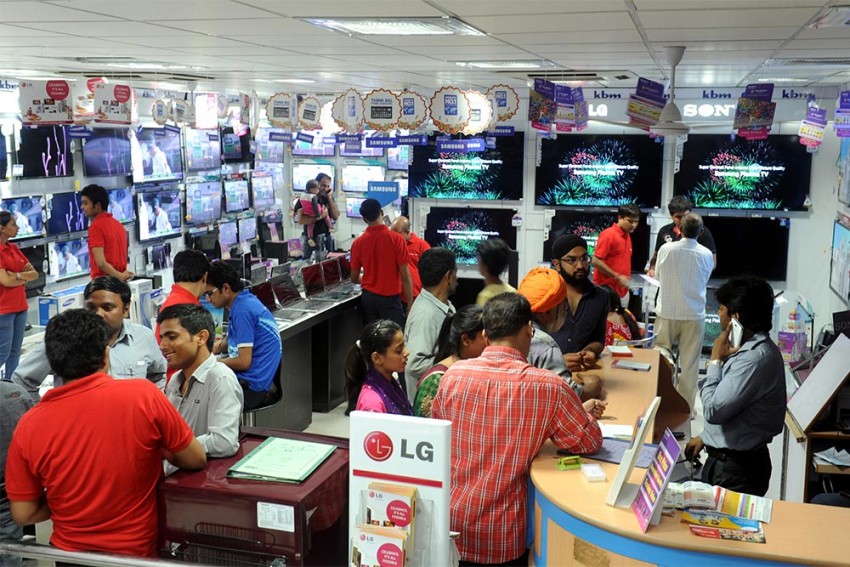 In The Mood To Spend
Buying and selling reach fever pitch in the festive air
Photograph by Tribhuvan Tiwari
Arindam Mukherjee October 14, 2016 00:00 IST Boom Time Is Back 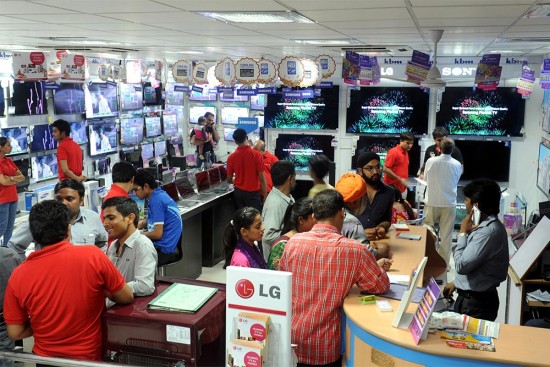 There is a lot of euphoria at the New Delhi headquarters of consumer electronics giant LG. Over the last few months, the company has been preparing to ramp up its product line inventory to be offered in the current festive season. This year, there is considerable expectation that after a long hiatus of three years, Indian consumers will open their purse strings to shop generously during festivals.

LG’s optimism stems from a rather rob­ust double-digit sales growth in the first half of the year, which was followed by a good showing at the outset of the festive season beginning September. During the 10-day Onam celebrations last month in Kerala, the company witnessed a sales growth of 35-40 per cent, reflected in a business of Rs 1,000-1,200 crore.

“There is a strong positive sentiment in the market,” says Niladri Dutta, chief marketing officer, LG India. “We expect to clock at least 30 per cent growth in the Navaratri-Diwali season. In fact, we hope strong growth will continue till November. We are looking at business worth anything around Rs 5,000 crore this season.”

This optimism is palpable pretty much across the corporate spectrum, with alm­ost all consumer durable companies readying their arsenal to meet the festive season demand, which is expected to be bigger than in the last two years in terms of sales. According to rough estimates, sales worth Rs 20,000-25,000 crore is expected to happen through online shopping alone in the current festive season, while physical retail is expected to account for another Rs 10,000-15,000 crore in the same period.

Typically, the festive season begins with Onam and Ganesh Chaturthi, picks up mom­entum during Navaratri and Diwali, and closes around Christmas. Reports of a bumper crop after two drought years have raised expectations. “Last year, the growth was only of about 5-6 per cent but this year we are expecting a growth of above 35 per cent from Onam to Christmas,” says Manish Kumar, president, Consumer Electronics and Appliances Manufacturers Association (CEAMA). “Between consumer durables and electronics, the business is worth Rs 25,000 crore each.”

Market experts attribute this increased optimism to a stable economic growth scenario and low interest rates. In ­addition, farmers, who are looking forward to a good crop or have already harvested and sold their produce, seem to be more willing to spend.

“This is the biggest quarter for every firm, as major festivals and harvests are in October this year,” says Harminder Sahni, MD of Wazir Advisors, a consulting firm. “In the last two years, the market was slow but, this year, good growth in automotive and two-wheeler sales has shown the way. With GST coming soon and interest rates going down, people have a feeling that the worst is behind us. Early signs of a good festive season are already seen. We should easily be looking at 30 per cent growth.”

Global online retail giant Amazon says its sale this year was three times last year’s. It claims to have sold 15 million units during its five-day sales.

Adding to the positive consumer sentiment are prospects of the Seventh Pay Commission award that has raised the salaries of government staff. Also the arrears to be paid by the government ahead of Diwali will put a lot of money in people’s hands. Most companies are expecting government employees to spend generously, picking up consumer durables, electronic goods and appliances in this festive season. As against the slim single-digit growth last year, the companies are expecting high double-digit growth this season.

A significant development is the rise in con­­sumer durables demand from rural and tier-2 and tier-3 cities. This is on exp­ec­­ted lines as, according to the Pay Commission report, nearly half the beneficiaries are in tier-2 and tier-3 cities. “While metros will continue to drive gro­wth, non-metros, smaller cities and ­rural areas will drive a healthy growth this year,” points out Rajiv Bhutani, VP, consumer sales for Samsung. “Rise in rural electrification, in particular, is helping create demand for appliances and consumer durables.”

Accordingly, companies are also tweaking their product lines to suit consumer demand. “This year’s growth will be pushed by TVs, which will account for 60 per cent of the sales, followed by frost-free refrigerators,” says Ajay Seth, head of sales for Panasonic India. “There is a huge replacement and upgradation market in urban areas, while it will be mostly new products in the rural areas. Value will come from the urban areas, while rural areas will give us volumes.”

Harvinder Singh, president (home appliances and sewing machines), Usha Int­ernational, says that, over a period of time, rural markets have not only shown higher growth compared to urban markets, but even consumption patterns are now showing similar trends as in the cities, acc­ording to an AC Nielsen survey last year. “This year, our expectations from rural India are in line with the urban markets as the rural consumer nowadays has become more aware and brand conscious,” says Singh. “Easy access to goods through e-commerce has also led to a rise in dem­and from rural areas,” adds Singh.

Analysts, however, find the market to be different from last year. The big difference is a much bigger impact in the physical retail as compared to the online retail. “There is a far more competitive environment this year with the arrival of many new players,” says retail expert and chairman of Technopak, Arvind Singhal. “This will reflect in increased sales. I expect 40 per cent of this year’s sales to happen during the festive months, which also dovetails with the beginning of the wedding season.” Normally, each quarter of the year accounts for 25 per cent of the sales. And most of these sales will come from automobiles, clothing, footwear and household appliances.

Like Singhal, Sahni also feels that a big differentiator this season would be an onslaught from physical retailers who had lost out in the season last year. “Last two years, online retail was taking market share as offline retailers did not know how to fight it out,” he says. “But now, offline ret­ail has figured out how to tackle the onl­ine challenge through discounts and it’s a potential force this season.”

The high stakes are not limited to physical retail alone. Online retailers are also on a high as far as this year’s festive season is concerned. In fact, most e-retailers who have already launched their big sale days have raked in big moolah. In the online sales launched last week, most of the online retailers have made a killing after a rather timid festive season last year when sales refused to pick up.

What is cheering the online sellers is that a large portion of the new online buyers are from smaller towns and the Northeast, which had not been part of India’s retail rush earlier. During the recent mega sales, Flipkart, Amazon, Snapdeal and Shopclues have all reported huge hits and robust sales.

In fact, Amazon says its sale this year was three times last year’s. It claims to have sold 15 million units in its five-day sales, including 1.5 million units in the first 12 hours of its Great India festive sale. The global onl­ine retail giant claims it saw five times more growth than last year’s Diwali, with TV sales rising 19 times over usual business. Home and kitchen products witnessed tenfold growth, while small appliances witnessed eight times sales growth. Interestingly, 80 per cent of Amazon’s traffic was coming from mobile phones, with a rise in rural and semi-urban areas. Moreover, Amazon reported it has witnessed fivefold growth in new customers, with 70 per cent of them coming from tier-2 and tier-3 cities.

Under the fashion category, the online retailer had over 2 million customers in just two days. Myntra and Flipkart’s fashion portal had a blockbuster sale on Day 1, clocking three times more revenue in the first hour than in the 2015 edition of Big Billion Days. Under the consumer electronics and appliances category, Flipkart saw a 100-fold spike as compared to any given day in September. In just 1.5 days, Flipkart sold half of all TVs sold by all trade retailers in a month. According to analysts, online sales of around Rs 10,000 crore is expected in October alone.

According to consulting and research firm RedSeer, e-retailers are likely to surpass all sales expectations in the ­ong­oing festive sale days. RedSeer’s research shows that, as a res­ult of ­bumper sales, the gross merchandise value (GMV) for e-retail as a whole is likely to be in the range of Rs 6,500-7,700 crore ($1-1.2 billion) for the first week of October.

Driven by this strong festive week performance, the industry GMV for the ent­ire festive month of October  is expected to be around Rs 11,000-13,000 crore ($1.7-1.9 billion) or $20-23 billion in annualised run-rate terms. Earlier, RedSeer had pegged the industry GMV to be in the $1.5-1.7 billion range for October, but these ­latest forecasts reflect the stronger-than-expected sales performance of e-­ret­ailers across categories. “As a res­ult of this bumper sales performance, we see the industry on track to deliver the single biggest month for Indian e-­­tailing sector ever, this October,” says Anil Kumar, CEO, RedSeer.

Tapping on buoyed consumer sentiments, consu­mer durables, electronics and mobile companies have already upped the ante and are reported to be spending close to Rs 20,000 crore on advertising, marketing and promotion this festive season—a good 10-12 per cent higher than last year. They expect the ret­urns to be equally handsome. In the first few weeks of the current festive season, consumers have not disappointed. And this is just the beginning. With a full two months remaining in the season, companies are stretching their hopes to improve their bottomlines, riding on the big Ind­ian consumer boom.

To A Better Palate