A quirky compendium of cartoons and the accompanying detailed commentary spark a bumpy ride to the past, and elicits doubts, thoughts and insights 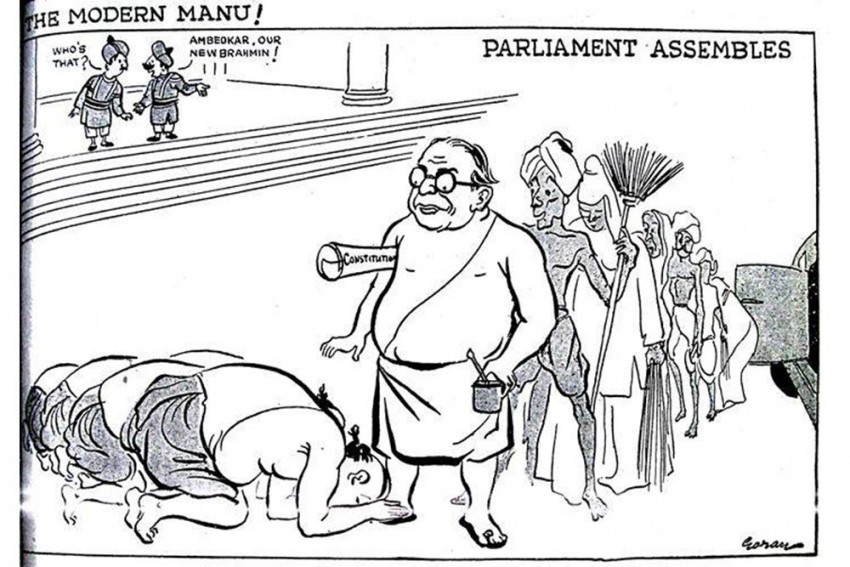 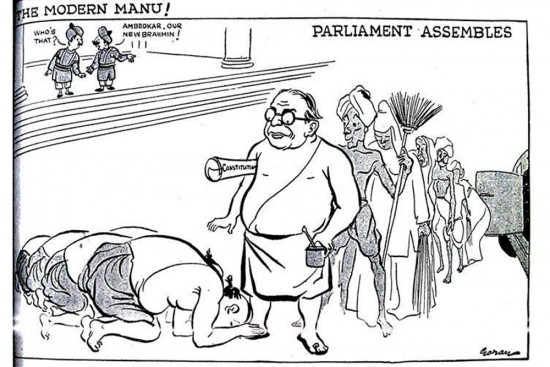 Reviews of books generally exh­ibit a relatively fixed patt­ern: the reviewer guides the rea­der through a tour of the book’s backstory, then its contents and main arguments, then of course a few of its shortcomings, and concluding with its recommendation (at times lukewarm, at times enthusiastic).

Just as reviews of books generally fall into a pattern, so do books themselves. No Laughing Matter, however, does not: it is unique and idiosyncratic; it has few (if any) predecessors setting its precedents; it is unstable in its genre, switching back and forth like a gestalt image, some moments looking like ‘political imperative’ (as the editor, Unnamati Syama Sundar states is his task), which operates in the world of action, and other moments loo­king like ‘serious scholarship’ (as its for­e­word writer, Suraj Yengde describes it), which operates in more contemplative spaces, like museums and universities.

If the book eludes usual patterns, then why not its review? So instead of creeping toward a thoughtful recommendation by way of a narrative enumerating its qualities, I am going to just say it straight, outright, here at the outset: You. Must. Read. This. Book.

Not because it’s a masterpiece—it has its shortcomings. But because it is a treasure. With over 122 cartoon images culled from archives, it is a feast for the eyes. And with so many triggering concepts (like hate speech, or atrocities) and so many flashpoint subjects (like freedom of expression versus defamation; or, ‘take it easy, it’s just a joke’ versus downright humiliation), it elicits irrepressible emotions in the reader, and that in turn leads its affected reader to reflection, doubt, reconsideration, new thoughts, and even insights.

Cartoons rely on shared experiences and mores for the humour to work. In the case of the Ambedkar cartoons, one of the shared values across much of the readership is casteism.

People are talking about this book in many different forums—journal revi­ews, public discussions and debates, and articles in the press. All this is well merited. If you have yet to hear about it, the gist of it is that its editor, Sundar (a cartoonist himself, and a doctoral student well versed in the cultural politics of visual arts), has collected together as many (anglophone) cartoons that he could find that captioned Ambedkar, and presents them chronologically, along with editorial comments that con­­textualise them historically, and eva­luative comments that critique them socially and aesthetically. In addition, there is a 30-page editorial introduction explaining the overall project, and a six-page foreword. These deserve praise too: both are pensive but lucid, moving but well-reasoned, modest but assertive.

Sundar’s own point of view throughout this magical history tour is transparent and unmasked. He writes: “Shankar or any cartoonist was not quite free to give expression to his freedom of expression. Working for a wage, a carto­onist often obliges his masters. Besides, given their social and caste background, love for Gandhi and the nationalist cause, an easy contempt for the Dalit cause and Ambedkar came almost naturally to many.” (p.39)

This ‘easy contempt’, Sundar claims, is a sort of unifying feature throughout all the diverse cartoon depictions of Ambedkar from 1932 to 1956. And Yengde adds in his foreword: “So many Dalit leaders are profiled in the exact same manner in print and web media outlets even now.” (p.19)

Sundar includes among the cartoonists not only the renowned Shankar (from Shankar’s Weekly), but many other mas­ters, like Enver Ahmed (from Hindustan Times and Pioneer) and R.K. Laxman (from Times of India). He also includes propagandists like Ravindra (Organiser), which creates a bit of ambi­guity in what is collected here. At least, it begs the question, What, exactly, does Sundar understand by this term ‘cartoon’?

We usually take ‘cartoon’ to signify simple, satirical drawings that attempt to humorously exaggerate their subject, while aiming to capture the essence of an event or issue (the latter explaining why newspapers publish them). In these, the comic element relies on shared experiences, values and mores in order for the humour to work. In the case of the Ambedkar cartoons, one of the shared values across much of the readership is casteism.

But there are also propaganda carto­ons, which aim to manipulate their target audience and change their values, or, alternatively, which derisively exaggerate their subject aiming to foment hatred or strong feelings. These deploy vilifying caricatures to achieve their aim. It would be a mistake to totally collapse one form into the other form, as No Laughing Matter sometimes does. And yet, what is so engaging about this book is that, by blurring the lines between these two distinct forms, it obliges the reader to try to reestablish that sharp line herself. This task turns out to be much harder than you might think.

The Power Of Poshan