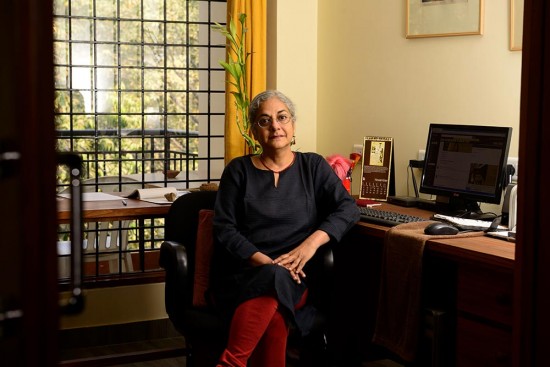 This is a writer who writes with a certain acuity, insight, blazing honesty, disconcerting dir­e­ctness, as anyone who has read her last work Almost Home will testify. That was a lacerating indictment of the injustice being perpetrated in places like Palestine and Algeria, in which the whole world is complicit.

It’s that raw, in-your-face, speaking  truth to power quality that one misses in this book that takes the more lyric path of allegory, laden metaphor and symbolism, to comment on recent happenings that have brought into question the very moral core of this country: the Vemula suicide, the Kalburgi murder, the orchestrated right wing “outrage”, “ hurt sentiment” over alternative readings/ versions of mythological texts—think Wendy Donniger, A.K. Ramanujan. What one expected from the writer was a sledgehammer blow; what one gets on the other hand are soft focus, diffused lens images of a Walden ravaged. Even the angst, the pain of the principle protagonists has the mimetic quality of the stylised Kalakshetra gesture.

Three stories, separated by a few centuries, run concurrently through the book and, in a sense, mirror each other. The moral: the more things change the more they are (frighteningly) the same.

Chikka, Puttanna, Rangayya, Maha­devi, Kannappa aka Kannadeva, the Benevolent Elder Brother constitute the star cast of the first tale: subalterns, castaways, renegades, refugees all, fleeing death, discrimination, oppression, seeking to create and inhabit their own Eden. Young Chandra (Chikka/ Mahadevi’s little girl) is the first tragic casualty of this quest for a more egalitarian alt universe. Another violent upheaval claims the rest. Except for Kannappa , Chikka and Mahadevi’s son, who’s to become the mystic saint whose poetry and the...