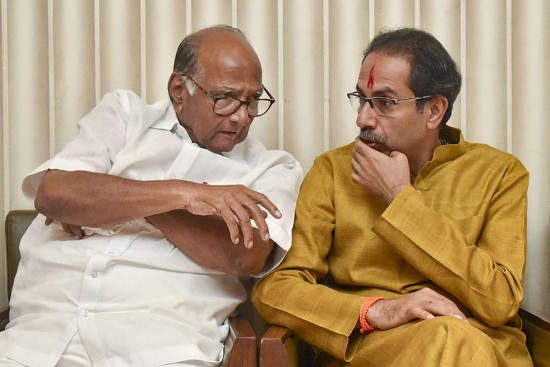 Sanjay Raut, who had recently undergone angioplasty, could feel his heart palpitating. It was he who had been coordinating with Sharad Pawar’s NCP. He had assured his party president that the NCP will not ditch the Shiv Sena. And now here he was, trying to gather the courage to speak to Uddhav. Raut picked up the phone, but dialled Sharad Pawar instead. NCP’s state president Jayant Patil had retired to bed late the previous night after binge-watching his favourite series, Jack Ryan, on Amazon Prime. (1)* He woke up to a dozen missed calls on his phone, of which eight were from Uddhav Thackeray.

The news was too big to believe. Even before anyone could confirm or deny the development, the biggest confirmation came in from none other than Prime Minister Narendra Modi, who at 8.16 a.m. tweeted congratulations to the new chief minister and deputy chief minister of Maharashtra.

The Shiv Sena and Congress camps were left devastated by the newsbreak, with both camps believing they had been backstabbed. For both of them, the man at the centre of suspicion was the same!

An early morning phone call woke up Sharad Pawar. It was an urgent...