Geopolitics In Tintin Comics: Around The World In 24 Albums

First published in 1929, the intrepid Belgian reporter Tintin is as ageless in comic books as he is popular among his global fans

What makes certain creative works, containing egregious racial caricatures and politically replete depictions, outlive their popularity among rea­ders they were originally meant for, but continue to hold the fancy among readers in other parts of the world? Just like P.G. Wodehouse, whose qua­int, upper-class British humour and characters are all but forgotten in his homeland, but continue to regale generations of English-educated middle class in South Asia. Or, say, Tintin, the globetrotting comicbook hero that Belgians and other Eur­o­peans seem to have grown over, but whose fan­dom continues to grow in the global South. Perhaps, for these unintended consumers, they offer an escape from their own milieu that their home-grown creative works are unable to give.

The Adventures of Tintin, a series of adventure comics created from 1929 to 1976, became incre­asingly popular throughout the 20th century. Its creator Hergé (Georges Prosper Remi) is still a sub­ject of intrigue in the press and among Tintin­ologists. Recent work in popular geopolitics has pioneered the use of these comics as a source mat­erial in critical geography. These adventures add­ress colonialism, the rise of the USSR, organised crime, capitalism, international drug trade, prelude to World War II (though the war itself is abs­ent), alcoholism, racism, coups d’états, might of multinational corporations, the Cold War and arms race, space travel, modern slave trade, the fight for control of oil and commercial air travel. These overlapping trends amount to dif­ferent facets of a single discourse, which pla­ces European ideologies at the centre of its worldview.

As a young artist, Hergé was influenced by his mentors, specifically Abbé (abbot) Norbert Wal­lez. Abbé Wallez was a Belgian priest and journalist who was the editor of the conservative, Roman Catholic newspaper Le Vingtième Siècle (The Twe­n­tieth Century), whose youth supplement Le Petit Vingtième (The Little Twentieth) first serialised The Adventures of Tintin. He encouraged Her­gé to use Tintin as a tool for Catholic propaga­nda to influence Belgian children. This is evident in his earlier works, which are replete with stereotypes from the European right-wing imagination. A breakthrough came in 1934, when the cartoonist was introduced to Zhang Chongren, a Chinese student. Zhang explained Chinese politics, cult­ure,­ language, art and philosophy to Hergé, which he used to great effect in his fifth album The Blue Lotus. From this point onwards, Hergé developed ideologically, amid the collapse of his native Bel­gi­­um during World War II. So did the series, bec­o­m­ing more progressive and universalist, until the fin­al book, by which time Hergé had develo­ped a certain amount of cynicism, although, racist, anti-­Sem­itic tropes continued to find their way into his oeuvre. As they got translated into many langua­ges and became available across the globe, cha­r­ges of political and visual mistakes inc­rea­sed, and many of these albums were extensiv­ely reworked­—­from the text to sometimes even picture frames.

The first Tintin album, Tintin in the Land of the Soviets, was crafted on the orders of Hergé’s superiors to be anti-Soviet propaganda. In this story, appearing a decade after the October Rev­o­l­u­tion, Hergé denounced Soviet propaganda and the communist system for generating pover­­ty, famine and terror. This anti-totalitarian theme of the first album would persist throughout the series.

Hergé wanted the second book to take place in the United States of America, a country which fascinated him. However, Abbé Wallez, who distrus­ted the USA as a land of Protestantism, lib­er­a­lism, easy money and gangsters, disagreed. Instead, he asked Hergé to draw a book about the Belgian Con­go, which needed white workers at the time.

Tintin in the Congo is a colonial rant, largely ref­l­e­cting the dominant Belgian attitude towards col­onialism. Published in 1930, it shows an arr­­o­gant Tintin gallivanting around the colony, chasing gangsters and dispensing his patronising white man’s wisdom to stupid and lazy mon­key-­like natives. Tintin’s bloodthirsty attitude to wildlife in this album is also astonishing. Libraries and booksellers in a number of countries around the world have removed this book from children’s sections. The strongest argument against its broad availability is probably not that the book will promote racism, but that it will provoke feelings of inferiority among children of African descent. 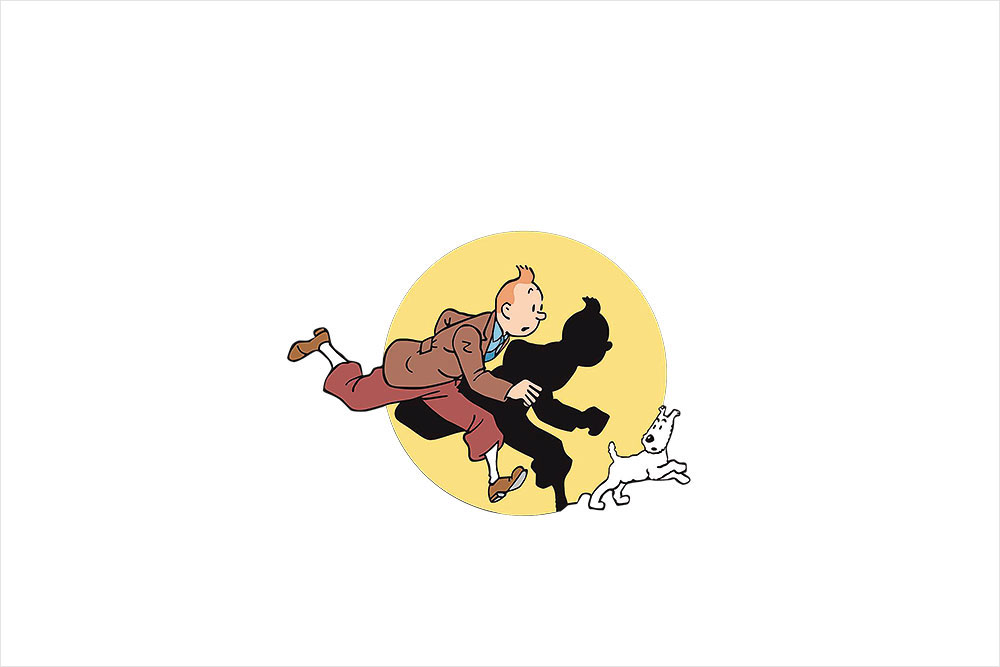 In his next adventure, Hergé could finally send Tintin to the USA. Tintin in America represents a significant change in tone. This story, like the previous ones, is extremely caricatured, with Hergé portraying America as the land of Al Capone, cowboys and gigantism. However, he took to the defe­nce of America’s First Nationals, blacks and blue collar workers, while criticising lynching, theft of native land, and American greed.

The fifth album of the series, The Blue Lotus, is set in China. Hergé was very concerned with portraying the country accurately, and the adventu­re has anti-imperialist tones written all over. It criticises the Japanese invasion of Manchuria, and shows with great disapproval Westerners making racist or ignorant remarks about the Chinese.

The Broken Ear is set in the ficti­onal South American rep­ublic of San Theodoros and takes a critical view of Western businessmen conspiring to provoke war over what they think will be profitable oil fields. They go about using bribery, corru­p­tion and the sale of arms to both sides to start a confl­ict, much like the Mukden Incident shown in The Blue Lotus. The war over the Gran Chapo oil pla­ins is based on the Chaco War of the early 1930s. The story also depicts the Shuar indigenous people, famous for their tsantsas (“shrunken heads”), according to the classic barbarian stereotype.

The Black Island is, in contrast, a straightforward thriller, with Tintin in pursuit of money forgers, with the chase to Scotland giving it a feel of Alfred Hitchcock’s movie version of The Thirty-Nine Steps. In this album, though Dr. Müller is a German villain and could be read as a parody of the Nazis, the head of the criminal gang, Puschov, is an anti-Semitic caricature.

Several stories following The Black Island were influenced by the impending menace of WW II, then by the war itself and the Nazi occupation of Belgium. Despite the fact that Hergé was in favour of neutrality of Belgium, King Ottokar’s Sceptre can be read as anti-Nazi. In this adventure, Müss­tler (a possible contraction of Mussolini and Hit­ler) is the leader of a conspiracy that seeks to mer­ge the kingdom of Syldavia with its old enemy Borduria. Written in 1938, this story reflects the annexation and invasion of neighbouring states by Mussolini’s Italy and Hitler’s Germany.

The early and unfinished version of Land of Bla­ck Gold (1939-1940) alluded to the mobilisation of Nazi war power. This unfinished adventure was set in the British Mandate of Palestine, with Bri­t­ish soldiers and officials. The beginning of the war and the defeat of Belgium prevented Hergé from finishing this version. He later rewrote it in 1950, setting it in the fictional Arab King­dom of Khe­med, replacing the conflict between Arabs and Jews by a civil conflict between two Arab factions.

During WW II, Hergé worked for Le Soir (The Evening), a newspaper which collaborated with the German occupiers. To avoid controversy during the Nazi occupation of Belgium, Tintin’s stor­ies from this time focused mainly on non-­­political issues such as drug smuggling (The Crab with the Golden Claws), intrigue and treasure hunts (The Secret of the Unicorn and Red Rack­h­am’s Treasure) and a mysterious curse (The Seven Crystal Balls).

One somewhat controversial adventure from this time was The Shooting Star, which was about a race between two crews trying to reach a meteo­rite which had landed in the Arctic. Hergé chose the subject of this album to be as fantastic as poss­ible to avoid trouble from the censors. However, he couldn’t avoid the intrusion of politics when he made Tintin join a crew composed of Europeans from Axis or neutral countries, while their underhanded rivals were Americans. Tintin also flies in a German plane (Arado Ar 196) in this adventure. What went on to be damaging for Hergé was that these stories were published in the collaborationist Le Soir. After the war, he and other mem­b­e­rs of the newspaper’s staff faced lengthy inve­sti­gations into their wartime allegiances. The banker and oil magnate funding the American eff­ort to lay a sta­ke on the meteorite—originally named Blumen­stein, later converted to Bohlwi­nkel—depicted with bulbuous nose (much like the recurring arch villain Roberto Rastapopulos), also led to charges of anti-Semitism.

The post-war Tintin stories are less controvers­ial and develop several recurring themes. Human­ism and anti-racism is salient in The Cas­ta­­fi­ore Emerald. The Calculus Affair is anti-­Stalinist, but also depicts the lengths to which both sides of the Cold War went to acquire weapons of mass destr­uction. The theme of The Red Sea Sharks is int­ern­ational trafficking and slavery, and Hergé has been criticised for his depi­ction of black victims in this album. In the first edition, they speak pidgin Fre­nch and seem rather simple-minded. He rewrote their dialogue in later editions. Arms trade is the main topic of Flight 714 to Sydney, in which milli­onaire Laszlo Carreidas is obviously based on Fre­nch aircraft industrialist Marcel Dassault. As Das­sault was born Jewish, this album is considered anti-Semitic by some.

The last finished album, Tintin and the Pica­ros, has both left- and right-wing undertones. In it, Tintin goes through profound changes. For the first time, he seems to be made of flesh and blood and perhaps even has weaknesses. For instance, he is at first uncharacteristically unwilling to tra­vel to San Theodoros, where his friends are accu­sed of war crimes based on false charges. In the end, however, he intervenes dramatically leading to a revolution. But there are no good guys in the political background here: General Alcazar is fina­nced by an international conglome­rate, while his rival General Tapioca is backed by para-Stalinists of Borduria. In the very last panel of this album, Hergé shows police patrolling the slums, wherein the inhabitants are no better or worse than before the coup d’etat, indicating that all that has chan­ged are uniforms and names on political placards.

The sheer scale of the geopolitical themes add­ressed in the 24 completed albums make The Adventures of Tintin a compelling masterpiece chronicle of the 20th century. What I find most fascinating is that while reading the entire series today, one can clearly discern how the themes and values evolve through the adventures, in line with world politics of the time.

Sougata Banerjee is an avid Tintin fan and armchair Tintinologist