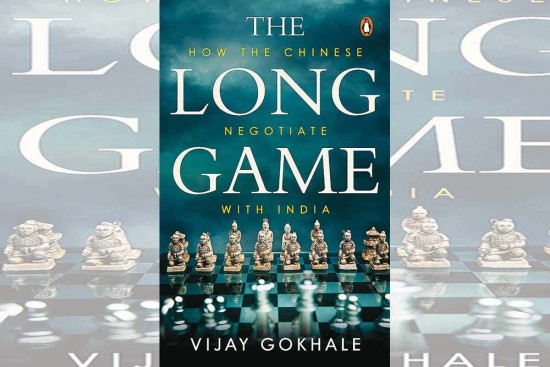 The art of negotiation comes with meticulous planning and extensive consultations for making informed choices, according to Ambassador Vijay Ghokle, who in The Long Game unravels the complexities and intricacies of the negotiating approaches of India and China.  The author’s long diplomatic career, much of which spent on China, both at HQs and postings in that country, provided him with deep insights into the machinations that Chinese employ in negotiations to determine outcomes desirable to them.

This insightful book brings out how India’s negotiating strategy evolved over time, in which it learnt from mistakes the hard way. In comparison, for the Chinese, deception is an intrinsic part of its negotiating strategy, drawn from the ancient warrior philosopher Sun Tzu, who bel­ieved in ‘ends justifying the means’. Lack of strategic depth in India’s negotiating strategy in the beginning was attributed to Jawaharlal Nehru’s personality-­driven foreign policy that aimed to project India as a leader of the Third World, rather than giving primacy to national interests. No effort was made to build consensus, nor analyse the consequences of our crucial positions.

At a time when the whole world was still sceptical of Communist China, India rushed in to recognise Mao’s Peoples Republic of China as the legitimate government as early as April 1950. Simi­larly, on Tibet, India failed to see the Chinese game of deception that essentially sought time to beef up its forces to deal from a position of strength. Gokhale regrets that where India could have extr­acted concessions on the boundary issue on both episodes, given that China was on the back-foot in the face of international disapproval of its rule and its annexation of Tibet, it surrendered crucial bargaining chips in the hope of obtaining China’s elusive goodwill. This initial, inexcusable naivety on our part has left us with far-reaching, deleterious consequences on our security to this day.

However, subsequent events illustrate how India’s negotiating strategy has become stronger and more mature. The 1962 war and China’s clandestine support to Pakistan’s nuclear bomb after India’s 1974 Pokhran nuclear blast held valuable lessons for the country’s foreign policy. In a reversal of its own game, India pushed China into isolation on the NSG agreement when the latter tried to isolate India internationally after the May 1998 nuclear tests, following the western sanctions against India. China’s double-talk on nuclear proliferation got exposed over its covert support to Pakistan’s nuclear bomb. India managing to get NSG approval, lending it the same rights as NPT members without corresponding obligations, was indeed a significant achievement.

On both the boundary question and Tibet, India could have extracted concessions, but surrendered its bargaining chips in the hope of obtaining China’s elusive goodwill.

On terrorism too, China’s duplicity got exposed when it resi­sted enlisting Masood Azhar Alvi, founder of the Pakistan-based Jaish-e-Mohammad as a terrorist in the UNSC 1267 Sanctions Committee. But these developments should also be seen in the context of the changing geopolitical dynamics, in which a rising China was perceived largely to be a threat to global peace and stability. Also, the growing intolerance against terrorism had reached its zenith in the aftermath of 9/11. China failing to see these undercurrents and quickly adapt to the changing circumstances was, perhaps, its own shortcoming.

The author draws attention to the pragmatism in India’s negotiating strategy since the early part of this century; it showed flexibility with Americans where required and remained firm with the Chinese, imaginably, picking elements from the Chinese playbook.

Gokhale also provides useful negotiating tips for dealing with a belligerent China that is prone to be using ‘wolf-warrior’ diplomatic tactics, including imposing agendas, bullying partners and pre-determining outcomes to suit its interests. Notwithstanding that the world might exp­ect China to be fair, transparent and const­ructive before it can be taken seriously, for India there are no easy options. Investing in understanding China and developing strong negotiating capacities and remaining prudent is an imperative.