Booked For A Rough Ride 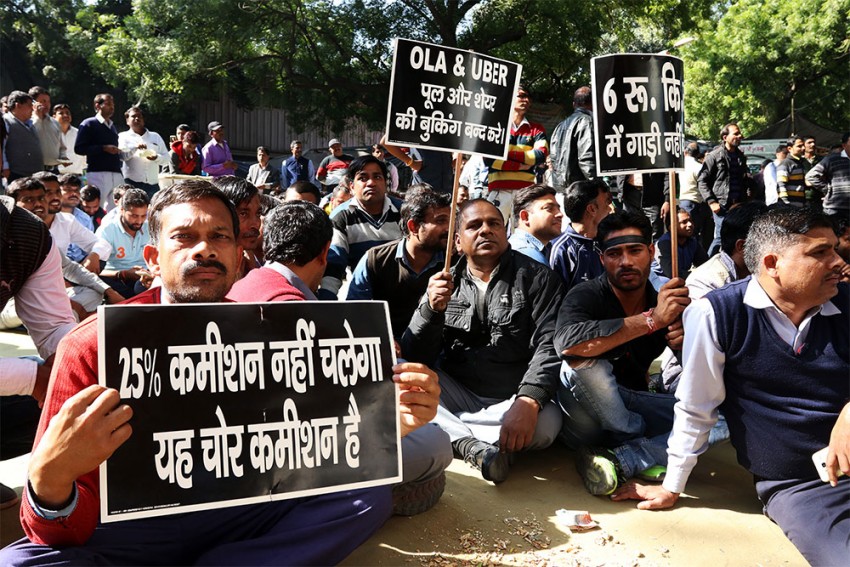 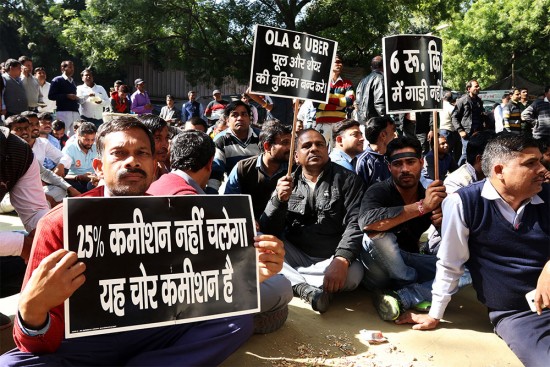 Walk into Jantar Mantar in Delhi and you’re greeted with a row of Swift Dzires and Wagon Rs with yellow number plates. Around them stand their owners and drivers, wearing desolate expressions on their faces; most wondering when they will be able to get back on the road.

The radio taxi driver strike, which started on February 10, has now come to what can be best referred to as an impasse between the driver-unions and the companies they work for. While the drivers associated with the platform can in no way see their demands being met by eit­her the government or their employers, the need to earn money and sustain families as well as pay off huge debts they are in because of the job, has put them in a difficult spot—to drive for such companies under meagre pay or to hold on and fight for what they believe they deserve.

Muhammad Anees, a resident of Delhi, left a well-paying job as a driver for a government employee to join Uber after he was promised an income of at least Rs 1.5 lakh a month by the company executive. He bought two cars on loan from Kotak Mahindra at a down payment of Rs 2.5 lakh per car and monthly INS­talments of Rs 12,500 for each car.  This was six months ago. Since then, Anees drives for more than 14 hours a day and is yet to make more than Rs 40,000 a month. “While joining the fleet, both Uber and Ola representatives ensured me that I would be better off driving for them while they promised minimum returns of Rs 1.5 lakh,” he says adding that he is yet to see the money.  Six months on, the money he does manage to make by driving his two cars barely covers his loan instalments and fuel costs. “The money coming in has reduced to such an extent that I haven’t even been able to pay the tuition fee for my sons. If I miss one more loan instalment my cars will be seized; what will I be left with then?” he asks.

Radio taxi drivers are not provided any insurance from the companies for the cars in case of any damage. Add to this the low rates of Rs 6 per kilometre for smaller cars and Rs 10 per km for the high-end ones. Drivers say they are earning lesser than auto drivers now. Kamaljeet Gill, president of the Sarvodaya Drivers Association, the union that called the strike, says the situation has now become so dire that the drivers on protest are fighting not for higher incentives but for their family’s empty stomachs. “ The earnings of drivers have dipped to such a low point, despite them working round the clock, that many have had to take new loans to pay off the ones they already have,” he says equating the situation drivers are in to that of the state of farmers in Maharashtra.

The coming in of radio taxi aggregators such as Ola and Uber into the Indian market marked several major changes in both employment structure and the app­roach to public transport. As their popularity grew, the aspirational urban lower middle class found a job opportunity more lucrative than ever before. So popular was the service that at its peak, Uber and Ola boasted of a fleet of 3,50,000 drivers and 5, 50,000 respectively, acco­rding to data released by the companies. What att­racted drivers to the platform were high incentives and assured inc­omes per month. More than 80 per cent of the drivers associated with such companies, according to the protesters, have taken loans to purchase their cars.

Uber and Ola both function on a target system which incentivises its drivers on the number of trips completed each day. Over the past two years, as the fleet inc­re­a­sed, such incentives kept reducing. When Dharam Singh, another resident of Delhi, bought a Swift Dzire to join the platform two years ago, he was being paid incentives as high as 400 per cent of his daily earnings. “In the beginning, for rides worth Rs 2,500 per day, we used to be paid monitory incentives to the extent of Rs 11,000. Now the same scale has come down to Rs 7,500 for earnings of Rs 3,500 each day,” he says showing the Uber int­er­face which lists out incentives. The drop in prices and incentives has left drivers struggling with managing their monthly expenditure, which include paying of instalments to banks, fuel costs, car upk­eep and fees to the companies they are associated with, in addition to providing a monthly income for the family.

One of the biggest problems that drivers on protest face with such taxi aggregators is their opaqueness in policy framework. Most incentives and policy frameworks on the system, according to the drivers, change arbitrarily without any prior notice. Suresh Kumar Yadav, another driver associated with both platforms, says not only are such incentives changing everyday for drivers, Uber and Ola have also switched to a daily employment contract with the drivers. Drivers are sent different targets every morning, which, if not met, mean a ded­uction in the daily earnings, “The targets can change from ten rides a day on one occasion to 250 kilometres a day on the next. There have been times when we are given targets of 15 rides a day, which is almost impossible to meet,” says Yadav.

Not completing a particular target also means a deduction of half of the usual incentives offered instead of a percentage deduction. Say, a driver is given a target of ten rides in a day till 12 am for an incentive of Rs 5000—if he is able to complete only nine rides, instead of cutting Rs 500 for the one missed ride, the company only pays the driver Rs 2,000. Moreover, even if the targets are achieved, drivers have to pay a 20 per cent fee to the company along with five per cent value added tax on each earning. This too can change on a daily basis—from a 25 per cent charge on only the incentives to a 25 per cent charge on all earnings for a day without informing the drivers in advance. When Outlook contacted Uber for a comment on the strike and driver dem­ands, no official statement was made available and they claimed that many of the drivers associated with the company were back on the road.

Gautam Verma, a driver with both Uber and Ola, says that for people like him, who have bought just one car, the losses, while tangible, only come to light after several months, since the numbers being dealt with are smaller. He gives the context of several people in the National Capital Region who gave up former jobs to buy cars to ply for Ola and Uber. “I know of someone in Gurgaon who has a fleet of 85 cars associated with the companies, a majority of which were bought on loan. The daily losses for this person run in lakhs INS­tead of a few thousands for people like us,” he says.

Radio taxi companies are able to bring about such arbitrary changes as they are still outside the ambit of government rules and regulations. While both the Delhi and Karnataka governments have come down on Uber and Ola several times in the past, they have ref­rained from making any framework to regul­ate them. Delhi transport minister Satyender Jain told Outlook last year that the Delhi government was already in the process of formulating a policy framework for such taxi companies, but no headway seems to have been made on the front yet.

Without any government regulations, such companies have been able to change market dynamics by undercutting other players through incentives for drivers and cheaper rates for customers in the beginning and are now at liberty to ­decrease the incentives in any manner they see fit.  S.P. Singh of the Indian Foundation of Transport Research and Training (IFTRT) says, “While such companies provide an import­ant service at rates that are attractive, it also gives drivers unrealistic expec­tations of earnings, which, when taken away as the business grows, beco­mes problematic.”

“Targets can change from ten rides a day to 250 kilometre a day,” says a driver. They have to meet their ­targets for incentives.

Singh adds that such a reduction of inc­entives by the companies was exp­ec­ted as they grew and got a larger stronghold in the market since most businesses function in a similar manner. “The res­earch conducted by the IFTRT clearly suggested that such a model of incentives by companies, while running on such cheep rates for customers, could not continue forever,” he says adding that the reductions and cuts in incentives could have been done in a better way under the supervision of the government.

Both Uber and Ola claim that the strike is partially over but drivers associated with the Sarvodaya drivers association maintain that they will remain on strike till at least February 28; the date of the hearing on the matter in the Delhi High Court. For things to go back to normal, there seems to be no way but for the companies and drivers to come to an agreement on issues, both short term and long term, preferably under the guidance of the government and the judiciary.