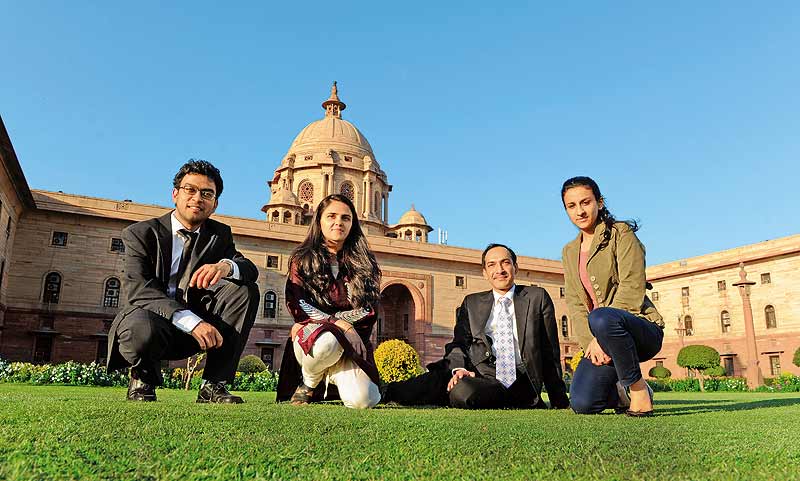 The first economic survey in 1959 had 71 typewritten pages. Today, it is a 294-page door-stopper with a 127-page appendix to boot. “That’s a four-fold growth, not much, considering how much the economy has grown since 1959,” sniffs Rangeet Ghosh, a 31-year-old Indian Economic Survey officer who worked on the first chapter of the latest Economic Survey. Ghosh appears to be someone who involuntarily does math in his head when numbers are thrown at him.

Indeed, an alphabet soup of digits and symbols simmers on the desk of almost every official in the finance ministry, including that of Rohit Lamba, a young economist (a PhD candidate at Prince­ton) and full-time consultant with the new Chief Economic Advisor Ragh­uram Rajan. Lamba’s area of interest is ‘mechanism design’, which deals with auctions. He also researches spectrum and coal sectors at the ministry. “It’s fascinating working in the government,” Lamba says. He’s here for the chance he “couldn’t turn down” to work closely with Rajan. Till the day he heads out to teach and research, but until then, he’s here to help the government understand the economy as a policy analyst.

Lamba’s neighbour is Prachi Mishra, a senior economist (and PhD from Columbia University) who worked in the PM’s economic advisory committee led by Dr C. Rangarajan for a year and then got poached—in a friendly way—by the CEA. “Dr Raghuram Rajan’s and my stint at the imf were at the same time and we met there. When I asked, the EAC let me move to the CEA,” she says. Mishra’s plate at the ministry is full with food management, manufacturing, labour issues and growth.

The only reason Ghosh, Mishra, Lamba and others in the ministry are public faces, in a way, is bec­ause this year the Economic Sur­vey departed from its usual format by declaring who worked on it. Thirty-nine people, young or older, were identified—a trend Rajan says he supports—as a way to acknowledge all who work on it. Some on this list are consultants, which means they work full-time in the ministry but aren’t part of the IAS, IRS or IES cadres.

“The consultants are full of enthusiasm. You really feel enthused by their presence,” says CEA Raghuram Rajan.

“The consultants are young and full of enthusiasm. You really feel enthused by their presence. Engaging with them on issues gets others to think anew about problems,” says Rajan.

Like any ministry official, these consultants know how to tackle tricky questions—like the one about slipping gro­wth. At first, there is a collective sigh, then Lamba and Mishra point out that India is perhaps a little obsessed with this figure. “There is so much attention on growth, other indicators are ign­ored,” says Lamba. The survey makes a fairly broad estimate of a 6.1-6.7 per cent growth rate over 2013-14.

The consultants are being noticed because some are younger women holding PhDs—rare in India among those working on the survey. Some consultants deal with entirely new segments, such as climate control finance, a unit the FinMin set up in 2011. Most on the list, however, are part of the government’s official cadres—IAS, revenue or economic service people.

Supriyo De, officer on special duty to Raghuram Rajan who was hand-picked by the previous CEA Kaushik Basu, says expert consultants allow the government to move a little faster. De belongs to the revenue service and worked for several years in the ministry. “Consultants are part of an effort to get independent views on board. The CEA’s team is fairly lean, and gets immediately fed with data. They help us understand the economy using the latest tools,” says De.

The atmosphere is decidedly informal in this part of the ministry, though their boss, they say, checks in through the day. Just the other day, Abhijit Banerjee, the MIT economist, visited them for a talk. The Delhi Economic Conclave, and other efforts to break the ministry-academia barrier, are going to stay too. An effort is also being made to tear down hierarchies—looking at the names who worked on the survey, one can’t tell who is boss, unless you count every grey hair.

In a data-starved country, the survey generates considerable interest, though it continues to wear a boring look. Lately, eff­o­rts have been made to recast it. There’s talk of giving its contents a spin, or theme. That would involve taking a clear position on issues and some amount of daring, for ministries won’t relish it if some of the predictions are awry. Yet, even as it is, the survey doesn’t lack interest. On February 27, the day the survey was released this year, some 20 people queued up for hours for ‘hard copies’ outside one of the ministry departments. Queries and responses, letters and calls, are still coming in.

“The UN, the World Bank, ministries, politicians, all wanted the physical document immediately after release,” says Kanika Grover, one of the new young consultants in the Climate Change Finance Unit who did her MA at TERI University in 2011.

Work on the survey begins every November and continues through Feb­ruary, when it is placed before Par­liament. Usually, writing the Budget and the survey overlap—which may explain why the introduction to the FM’s budget speech this year echoed the survey. The survey isn’t one of those documents that disappears after publication. Usually, there is a kind of ‘survey outreach’, involving lectures, presentations and talks, that tries to engage with the general and academic audience on its contents. Mishra, who has been invited to Washington to speak before the oecd (a visit not funded by the government), wants to talk about the survey on her trip. “There is a lot of interest in the survey we publish in Washington and other places,” says Mishra.

The growing global interest in the India story explains why individual writers, including the consultants, have been acknowledged separately for putting together the ‘boxes’ that are scattered through the survey. Some of them can now openly say, we wrote it so.