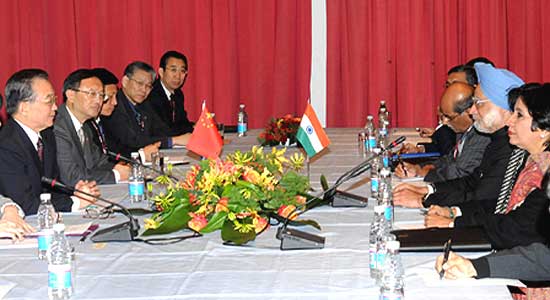 In the backdrop of the global financial crisis and the drastically evolving international situation in 2009, China-India relations generally maintained the momentum of stable development and made new progress. In 2009, China and India witnessed frequent high-level interactions. Chinese President Hu Jintao held talks with Indian Prime Minister Manmohan Singh at the Shanghai Cooperation Organisation (SCO) and and the BRIC (Brazil, Russia, India and China) summits in Yekaterinburg, Russia, as did Premier Wen Jiabao with Manmohan Singh at the East Asia Summit in Thailand and the Copenhagen Climate Change Conference.

Leaders of the two countries spoke highly of the significance of China-India relations and set the direction for its future development. Both sides, proceeding from the long-term and strategic perspective, reiterated their commitment to deepening mutually beneficial cooperation, properly handling the differences between the two countries and joining hands to push forward the Strategic and Cooperative Partnership. Chinese state councillor Dai Bingguo, foreign minister Yang Jiechi, minister of commerce Chen Deming and party secretary general of Sichuan province Liu Qibao also paid successful visits to India and reached wide-ranging agreement with the Indian side on jointly implementing the consensus of top leaders of India and China and strengthening the practical cooperation between the two countries.

india and china are interested in development. Both need peace and stability. and bilateral ties face new prospects and opportunities.

The global financial crisis posed great challenges. As major emerging and developing countries, China and India enhanced coordination and cooperation, took proactive actions in response to the crisis and jointly overcame the difficulties. The two economies went against the downward trend of the global economy to successfully regain stability and sustain the growth registered over the years, thereby playing a very important role in the recovery of the world economy. Both China and India endeavoured to overcome the impact of the crisis on their economies, properly handled trade frictions and maintained a relatively sound momentum of bilateral economic and trade cooperation. Bilateral trade reached $38.3 billion from January to November 2009, with the whole-year trade volume set to cross $40 billion. The economic cooperation between China and India has yielded mutual benefit; it is a win-win situation for people of both countries.

Meanwhile, China and India are working closely within G20, actively proposing reforms to the international financial system and jointly promoting the building of a fair and reasonable international economic and financial order. The two countries strengthened coordination, ensured positive results in both the London and Pittsburg G20 summits, greatly elevated the status, function and voice of emerging powers in international economic and financial affairs and safeguarded the interests of vast developing countries, including China and India.

Bilateral defence exchanges have witnessed new development. The vice chief of staff of the Chinese People’s Liberation Army, Ge Zhenfeng, and the commander-in-chief of the PLA Tibet Military Area, Shu Yutai, visited India. The Chinese missile destroyer Shenzhen paid a goodwill visit to the port of Kochi on its way back to China after completing an escort mission in the Gulf of Aden and off the coast of Somalia. The chief of staff of the Indian Navy, Admiral Sureesh Mehta, also visited China and Indian naval warships participated in the commemoration of the 60th anniversary of the Chinese PLA Navy. These exchanges and visits have greatly promoted mutual trust between the two armed forces as well as the two countries, enhanced stability in the border areas and strengthened cooperation in combating sea piracy.

Climate change, one of the most important issues of 2009, has also become a facet of China-India cooperation. Both countries share similar concerns and positions in addressing climate change and closely consulted and coordinated with each other. The Indian minister of state for environment and forest, Jairam Ramesh, communicated closely with his Chinese counterpart. In November, Xie Zhenhua, vice-chairman of the China National Development and Reform Commission, visited India and signed with the Indian side an Agreement on Cooperation in Addressing Climate Change. During the Copenhagen climate conference, China and India joined hands. Premier Wen had talks over the phone with Prime Minister Singh to coordinate the stands of the two countries; they maintained close contact throughout the Copenhagen conference. China and India, together with Brazil and South Africa, worked for the unity of developing countries, put forward a position paper, and urged developed countries to fulfil their obligations and commitments, thus protecting the legitimate rights and interests of developing countries. Both China and India played very important roles in achieving the positive results of the Copenhagen conference.

The development of China-India relations in 2009 witnessed at least three positive trends. First, bilateral cooperation is developing in an all-around manner. While both sides maintained frequent exchanges in political, economic and defence issues, there are also active communications between parliaments, political parties, youth of the two countries as well as in the fields of culture and education. In international and regional affairs, bilateral cooperation has expanded and deepened. Both sides have maintained effective cooperation in the frameworks of China-India-Russia trilateral mechanism, BRIC, BASIC (Brazil, South Africa, India and China), developing five nations (BASIC+Mexico), 8+5, G20, and other forums. The two governments have also acted jointly in the wto talks to combat trade protectionism and push for progress in the Doha-round talks.

Second, the bilateral relationship is getting increasingly mature. Being immediate neighbours and emerging economies, the China-India relationship occasionally comes under stress because of a few sensitive issues either left over from history or rising from frictions of respective interests. Yet, the two governments can view bilateral relations from the long-term and holistic perspective, stick to the principle of appropriately dealing with core interests and concerns of both countries through dialogue—all reflecting an increasing maturity.

Third, public opinion supporting the development of bilateral relations in both countries is gradually getting consolidated. Enhancing friendship and cooperation between China and India accords with the will of the peoples and the trends of the time. Citizens of both countries are fully aware that cooperation benefits both sides while confrontation harms each other. Sino-Indian synergy would not only benefit the two peoples but also contribute to peace and development in Asia and the whole world. Cooperation between China and India in regional and international affairs makes it clear that their relationship has gone beyond the bilateral dimension to acquire global and strategic importance as their role and influence become increasingly prominent.

Currently, both China and India are dedicated to national development and both are in great need of stable international and regional environment. China-India relations face new opportunities for further development. We have reasons to be confident about the prospects of our bilateral relations. This year is an important one for the development of China-India relations. Both will mark the 60th anniversary of the establishment of diplomatic relations, coinciding with a China Festival in India and an India Festival in China. We should seize this opportunity and further intensify exchanges and collaboration in various fields, promote mutual understanding and trust, expand contacts and friendship among the people and boost China-India relations to a new height.

(Zhang Yan is the Ambassador of China to India.)