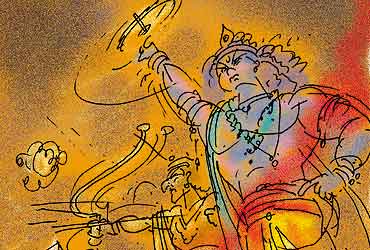 Two Thrillers—The Hunt For K & A Whiff Of Old Evil
By Ramesh Menon
Rupa Rs 295; Pages: 416
Ramesh Menon has certainly chosen an unusual and somewhat winding road to tell his tales of intrigue. In this compendium of two novels—the first of which has appeared earlier—he picks up the eternal heroes of mythology, twists their names into anagrams, turns them into intelligence agents or their quarries, and places them on the broad leafy avenues of New Delhi.

In the first thriller, the unprepared reader has to wade through the desultory concerns of Detective Inspector Partha brought in from Mumbai to help solve the case of a mysterious terrorist who is committing one mysterious murder after another in Delhi. Mercifully, the book lifts to another level when the supposed terrorist comes into the narrative—he is none other than Krishna, who from his little island in the middle of the Yamuna, has launched his attack on the citadel of corruption. And Partha is none other than Arjuna, drawn inexorably to the Blue God. Sprinkled through the narrative, like crossword clues, are versions of Kansa, Dwarka, Balram, Indra, Radha.

The Whiff of Old Evil centres on a group of highly promiscuous intelligence operatives, who begin to meet violent and brutal deaths. Housed in Ayodhya Apartments, the protagonist plays out Rama. Political developments in Sri Lanka are woven into the mythological texture. Once again the characters of Ramayana play out a chilling drama of kill and counter-kill in the familiar landscapes of the Delhi Zoo, Gymkhana Club and so on.

Menon’s writing is unnecessarily patchy, perhaps because of his perceived need to contrast mundane modern intrigue with deeper moral and spiritual issues. Brilliant dream passages featuring Krishna, Arjuna and Rama contrast awkwardly with cliched conversation between stereotypical operatives. Menon could have avoided this pitfall by raising the stories to a more literary—and perhaps less thrilling—standard. Be that as it may, he certainly deserves full marks for his originality.