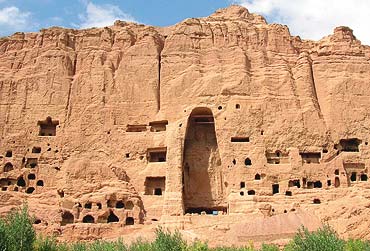 outlookindia.com
-0001-11-30T00:00:00+0553
Five years ago, this wide, green valley surrounded by towering cliffs in the heart of Afghanistan was the country's Ground Zero. This was where the giant Buddhas carved into the cliff face were blown up by the Taliban, just six months before 9/11. Today, new hope and excitement grips Bamiyan as a team of archaeologists believes it has found the site of a third giant Buddha which may still be intact, buried out of sight for centuries.

The third Buddha was described in detail by the Chinese monk Hiuen Tsang, who visited Bamiyan on his way to India in 630 AD. The monk's record of his travels is the first documented account of Bamiyan and its Buddhas. He describes not only the standing images (destroyed in 2001) but also a much larger reclining Buddha which he saw in a thriving monastery in the valley. The man was not given to flights of fantasy—his records are so precise they have often helped archaeologists in their quest to uncover the past. About Bamiyan, he wrote of "a reclining figure of the Buddha about to enter Nirvana, more than one thousand chi (300 metres) in length, in a temple two or three li (about 2 km) to the east of the royal palace".

Afghan archaeologist Dr Zemaryalai Tarzi, who heads the French Archaeological Mission in Bamiyan, says his team recently uncovered part of the Eastern Monastery, the location of the "reclining Buddha". The site is just in front of the great cliff, to the east of the now-empty niche where the smaller of the standing Buddhas used to be. "We believe we've found the monastery," says Tarzi, who's worked on excavations here since the '70s, when he was director of Afghanistan's Institute of Archaeology.

Tarzi's current endeavour began in '01. "We have found lots of things at this site, including five stupas and more than 30 heads of Buddha modelled in clay, which still have remains of the polychromatic painting on their faces," he reveals. Uncovering this site took months of painstaking digging through layers of history. "Below the surface are layers of the Ghorid, Ghaznavid and pre-Islamic Turkic periods, and below that is the Buddhist monastery," explained Tarzi at his camp in the ruined village of Tulvara. Bone fragments and pieces of clay statuary lay in heaps at the camp. Bamiyan's Buddhist past is said to date to the Kushana and Hepthalite Hun empire, spanning from the 1st to 6th centuries AD.

The excavation site is closely guarded and visitors are not allowed. Photographs were not permitted either, though a brief look inside reveals the remains of solid structures, steps, a paved courtyard and, most exciting of all, a pair of giant feet. They may have been part of a large statue, or just a symbolic representation of the feet of the Buddha—it is hard to tell, for the excavation is not complete. Tarzi took some persuading to agree to speak to Outlook, because exclusive rights to the story of the new excavations have been sold to National Geographic, presumably to fund the excavations. With winter approaching in the Bamiyan valley (height: 2,500 metres), excavations have been suspended and will now resume only next summer.

Bamiyan, which means "place of shining light", gets its name from the light bouncing off the cliffs of conglomerate rock, layered in shades of purple and brown. Now an isolated region a bone-rattling 8-10 hours' drive from Kabul, Bamiyan was once at the crossroads of many civilisations, a prosperous valley along the Silk Road with the two huge Buddhas, one of them 55 metres and the other 38 metres tall, hewn out of the cliffs and standing sentinel over caravans of traders, pilgrims, scholars and soldiers. Built in the 3rd and 5th centuries AD, the two Buddhas were left untouched for over 1,500 years, even by the marauding armies of Genghis Khan, Mahmud Ghazni and Nadir Shah. Aurangzeb did, however, have a bash at them, but his artillery only succeeded in damaging the foot of one of the Buddhas. 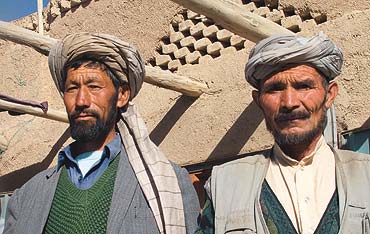 Today the empty niches still inspire awe, with the outline of the smaller Buddha clearly visible. Opinion is still divided on whether the Buddhas should be rebuilt. Today, it would be impossible to carve them out of the same cliff face; and to build new images and instal them there would not recreate the aura and magnificence of the originals. "They just would not have the same feeling," says Afghan deputy minister of culture, Omar Sultan. A proposal to recreate the images using laser beams, as has been suggested for the Twin Towers site in New York, is being given serious consideration.

For now, the most urgent task is to consolidate the fragile, crumbling cliffs, further weakened by the dynamiting carried out by the Taliban. The last restoration was done in the '60s and '70s by the Archaeological Survey of India, which had repaired and strengthened the Buddhas, the cliff face, cornices and balconies. Today, Georgios Toubekis, an architect with ICOMOS (International Council on Monuments and Sites), has the task of collecting and preserving the fragments of the destroyed Buddhas—some of them as large as boulders—and consolidating the surface of the cliffs, in a major project funded by Japan and Germany.

Bamiyan's cliffs are also honeycombed with caves, many of them with exquisite paintings executed by Indian and Persian artists during the Hepthalite period. Some 80 per cent of these have been destroyed over the centuries through neglect, theft and destruction, but those that remain are now being carefully preserved and protected. The people of Bamiyan are Hazaras, an ethnic and religious minority who are Shias of Mongol-Turkic origin, believed to be descended from the 'hazaar'—the thousand soldiers Genghis Khan left behind here after conquering the region. Among the poorest and most backward communities in Afghanistan, they are counting on the third Buddha to emerge from the sands of time, and usher in a tourism boom that will bring Bamiyan the development and prosperity it so desperately needs.

"It Took Me Long To Come To Terms With Myself. Those Were Painful Years."