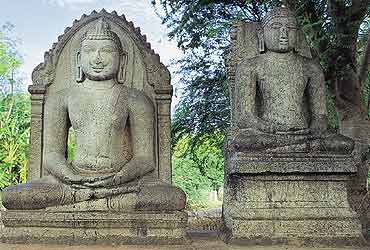 outlookindia.com
-0001-11-30T00:00:00+0553
Peace of mind seems an impossible attainment in the searing noon sun at Paravai, in Tamil Nadu’s Perambalur district. Yet, the majestic calm on the expression of the Enlightened One seated in the town’s bus stop belies an immunity to mere extremes of climate.

A bus stop in a small south Indian town seems an odd place to find an image of a Buddha. But, in recent years, archaeologists and historians have been discovering these statues all over Tamil Nadu. Just 40 km away in Jayamkondam, a granite Buddha sits on a porous laterite pedestal. An Archaeological Survey of India sign warns would-be desecrators that it is a protected monument, but says nothing about the age of the statue.

In any case, local concerns with the image seem to be more prosaic. A woman dries vendekkai (okra) on the pedestal, "Because the goats can’t reach there." Behind the Buddha hangs a clothesline.

The Buddha in Ogalur village is worshipped as the ‘Dubai God’. More than 200 people from there work in West Asia, helped, they believe, by their much-garlanded Buddha. As thanksgiving, dinar-enriched Gulf returnees have erected a podium and the ancient Buddha now sits atop blue tiles in a caged enclosure. 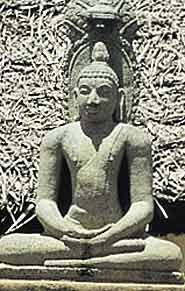 Historians say these stone Buddhas may be between 800 and 1,200 years old. Amateur historians and Buddhists are also tracking these images down today, and the list of Tamil Buddha sculptures is growing. Some scholars have been studying them for rather longer, though. The first attempt to document Tamil Nadu’s Buddhas was made by Mayilai Seeni Venkatasamy in 1940 in his Tamil work Buddhism and Tamil. In 1969, when Theodore Baskaran, a Chennai-based scholar, accompanied Venkatasamy to some Buddhist and Jaina sites, he found that several of the Buddhas listed in 1940 were missing.

But while some Buddhas disappear, new ones are being traced. In 2000, B. Jambulingam, in his doctoral thesis Buddhism in the Chola Country, Tamil University, Thanjavur, listed 60 granite images of the Buddha in Perambalur, Tiruchi, Thanjavur, Thiruvarur and Pudukkottai districts, adding at least 16 to the earlier recorded Buddhas. The survey covered only five of the state’s 30 districts.

A few of these are in museums, but most lie abandoned, invariably with Shiva or Vishnu temples in the vicinity. A distinctive feature of Tamil Buddhas is the flame-shaped ushnisha (a chignon symbolising expanded knowledge) atop the head—a feature said to have spread from here to Sri Lanka, Burma, Thailand.

Where have all these Buddhas come from? Though Buddhism’s Tamil links have not been studied in as much detail as those of Jainism, it is clear that the association with Tamil Nadu goes back a long way. The Sangam period epic, Manimekalai, dated between the 3rd and 7th century, is a Buddhist text written by Sittalai Sattanar. In 637, when Hiuen Tsang landed in Kanchipuram, he recorded more than 100 monasteries and over 10,000 Buddhist monks in Pallava country. 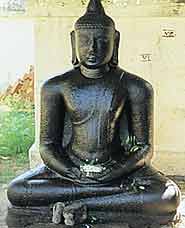 The ruins of one vihara, or monastery, in the coastal town of Kaveripoompattinam dates back to the third century BC. The Cholas, otherwise hostile to Jainism and Buddhism, granted land for a Buddhist vihara in Nagapattinam, a key coastal town, in 1006. It survived in dilapidated condition till 1867, when Jesuit missionaries levelled it. Only a sketch remains. Since 1856, some 350 Buddha bronzes have been found near the Nagapattinam vihara, dating from the 11th to the 16th century. An inscription on one, currently with the John D. Rockefeller Collection of Asian Art in New York, says this Buddha was created to be carried in a procession during the temple’s sacred festival, much like south Indian Hindu images.

Tamil newspapers have been reporting the discovery of Buddhas with regularity.In February, 45 bronze Buddhas were uncovered in Koradacheri, Tiruvarur district, a town famous for its Shiva temple. 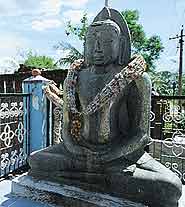 Several scholars share a rather startling interpretation for the proximity of many of these finds to temples. Late art historian Suresh B. Pillai had argued that, architecturally, several Chola period temples were originally Buddhist shrines. In the Chola-ruled Kaveri delta areas, several huge Buddha granites have been recovered within or close to temples.

So, were Hindu temples built on old Buddhist shrines? This is a matter of no small controversy; some scholars claim no such thing happened. Counters Baskaran, "The religious affiliations of archaeologists have led them to ignore contrary evidence even when it stared them in the face."

Pillai’s 1973 work, Introduction to the Study of Temple Art, argues that in several Chola temples the sculptors’ guilds left clues about the original shrines. Ahead of and during the Chola period (beginning 850 AD), Tamil society witnessed deadly feuds between Jaina, Shaivite, Vaishnavite and Buddhist sects. That the victories in these fights are remembered and celebrated even today has proof in the Thiruvadigai temple, Cuddalore district, where Shiva is worshipped as Veerattaneswaran, the Lord in his triumphal dance mode. The temple houses a granite Buddha in a corner. The oduvar (chanter) of the temple, Arumugan says: "On the third day of the annual temple festival we observe the Samanar Utsavam, when the temple elephant knocks the Buddha sculpture thrice with its trunk to symbolise the victory of Shaivism over shramanic religions." 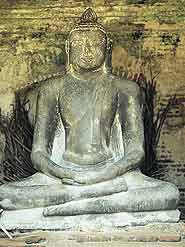 The builders of Shiva and Vishnu temples would have found the granite Buddhas too large to move very far away from the original sites. Reinforcing Pillai’s thesis, John Samuel, founder-director, Institute of Asian Studies, Chennai, says: "I have discovered 150-200 Buddha and Buddhism-related statues close to ancient Hindu temples. In our field studies, we usually conduct searches within 100 metres from a temple’s location and we see a lot. In the asi-maintained Darasuram Airavateeswarar temple near Kumbakonam (declared a World Heritage Site last week), a shrine dedicated to Buddhist deity Taradevi was excavated." The pre-Pallava and Chola era Buddhist and Jaina shrines, made of brick and mortar, were easier to pull down, unlike the stone Hindu temples succeeding them.

The big granite idols survived, but are invariably defaced or decapitated. In one Salem temple, the deity is even called Thalavetti Muniappan (beheaded saint-god). The chopped head, with the flame chignon, has been clumsily re-affixed to the body and a "nose-job" performed in silver on the otherwise black granite image.

Today, there are virtually no practising Buddhists in Tamil Nadu. Historian R. Champakalakshmi, formerly with jnu and an authority on Jainism in Tamil Nadu, holds that Buddhism here survived along trade routes. The otherwise Shaivism-friendly Cholas gave Buddhism token space as "it was essentially a religion of traders south of the Vindhyas."

However, Buddha images have been—and are being—found not just along coastal trade routes, but almost all over Tamil Nadu. Granite Buddhas have been recorded in landlocked Salem, Karur, Vellore, Kanchipuram, South Arcot, Tiruchirapalli, besides Pondicherry, Thanjavur and Ramnad. Vidya Dehejia, professor of Indian and South Asian Art at Columbia University, writes, "The Buddhist faith persisted in the Tamil country with greater strength and for a longer period than has hitherto been realised." Tamil Nadu still awaits a historian to enlighten it about its mysterious Buddhist past.