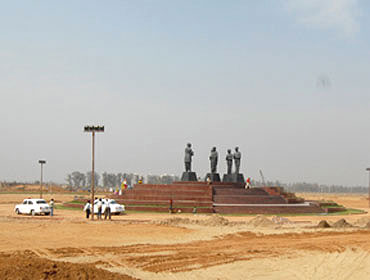 Jawaharlal Nehru once dreamt of IITs as institutes that would sculpt India's technocrats of the future. Fifty years on, UP chief minister Mayawati is having similar dreams, of an institution providing cutting-edge education to all classes with special emphasis, of course, on the weaker sections of society. So, beginning the 2008-09 academic session, the Gautam Buddha University (GBU), Mayawati's brainchild in Greater Noida on Delhi's periphery, is readying itself to carry out that mandate. The new university, a JNU of sorts if you will, shall have at its heart the ideals of Buddhism.

Spread over a sprawling 511 acres off the Taj Expressway, the first programme to open the university will be an MBA degree course, with around 100 seats. The admission process and faculty recruitment is already on and GBU officials claim to have received applications from even teachers at the IITs for faculty positions. "Word is getting around about the university. It's a gigantic dream with unparalleled projects, like the 1,40,000 sq ft library and the 5,000 single-room hostel complex, both of which I think will be the biggest in the country," exclaims university vice-chancellor R.S. Nirjar. Both the projects, if realised, will surpass the size of Jawaharlal Nehru University's present library (about 1,00,000 sq ft) and its hostel strength (4,324).

Besides the MBA programme, the university will offer education and research positions in emerging disciplines like biotechnology, nanotechnology and IT. It will have eight schools for these and also for applied sciences, environmental studies and, of course, Buddhist studies. Part of the campus has also been earmarked to be developed as an incubation centre for technological projects developed with foreign collaboration. "GBU will be a modern technological university but one that is driven by the rational, spiritual and ethical ideals of Buddhism," the V-C adds. With a 30 per cent green belt and wi-fi environment, other on-campus facilities planned include a meditation centre and a swimming pool.

Launched in 2002, when Mayawati became the CM for the third time, GBU had a sputtering start. She lost power soon thereafter and the project was mothballed, only to be revived late last year. "Having lost five years, we are now determined to begin classes from this session. That's the challenge before us," says Nirjar. Work is on full steam to construct the administrative block that will initially also serve as the school for management studies. The university, expected to be "completed" in five years with a financial outlay of around Rs 1,000 crore, will have 5,000 seats at its peak.

Elaborating on the university's mandate of imparting education with a Buddhist touch, Nirjar says corporate social responsibility (CSR), for instance, fits in perfectly into their scheme of things. "What is CSR? It's about being sensitive to social and environmental issues combined with an awareness of ethics. That's what Buddhism is about too," he says. Interestingly, the brochures for GBU's MBA programme boldly sell an "added element" in its B-school curriculum: enlightenment. Faculty and student exchange programmes are being worked out and talks are on with some Buddhist organisations in Thailand to launch activities at GBU's School for Humanities and Buddhist Studies.

Meanwhile, Buddhist scholars in India are upbeat at the idea of a university dedicated to research and academics in their field. Mangesh Dahiwale, director of the Manuski Network in Pune, which works with the disadvantaged sections of society and also spreads the Buddhist word, hopes the university will help uncover more details about the new Buddhists in India. "Very little research has gone into areas like the socio-economic/political impact that conversion has had on the lives of those people who became Buddhists. For example, it is known that conversion helps boost literacy rates as people feel mobilised once liberated from untouchability," he says. 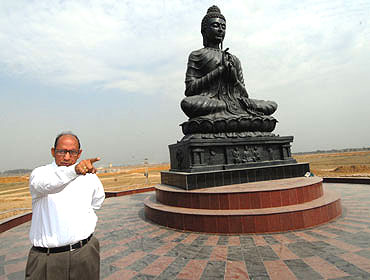 V-C Nirjar sees a JNU in the making

In October 1956, B.R. Ambedkar, along with around 3,00,000 Dalits, had converted to Buddhism in a public gesture that set the momentum for the new Buddhist revival

in India. The GBU campus, much of it yet to be developed, has replicated in stone the scene of Ambedkar's conversion. Lokesh Chandra, former Rajya Sabha member and an eminent Buddhist expert, says, "Even the Pali Tripitaka (a formal term for the Buddhist canon of scriptures) has not been translated entirely into any modern Indian language. It needs to be done, more so into Marathi and Hindi, so that the neo-Buddhists in India have a better idea of the Theravada school of Buddhism that they practise."

The university comes at a time when there's renewed interest in Buddhism in the country, more so as a tool for diplomacy with Asian countries where Buddhism is predominant. Chandra says that "most of the foreign students who come to study at Delhi University do not come to pursue degrees in physics or chemistry, but to study Buddhism. If this university does well, it will do a lot to boost India's status as a cultural power".

Dahiwale predicts that the university will also have a political impact, helping Mayawati reach out to the new Buddhist electorate all over India, whose size, he claims, is around 20 million. "Ambedkar's followers, irrespective of their religious background, are open to Gautam Buddha as an emancipator," he states. But Nirjar differs. "Let's not attribute any political motive to this university. It is above all that," he says.