Northeast's man-elephant turf war has aggressors from both sides 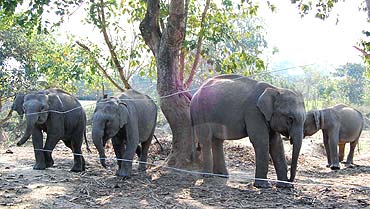 As Diwali approaches, villagers in some parts of Assam and Meghalaya are buying crackers, but for a different reason altogether. They are intended to ward off marauding herds of wild Asiatic elephants descending on human settlements, breaking houses, killing people, and feasting on standing crops like paddy and sugarcane. Some pachyderms even wash down the food with the fermented rice beer that locals brew in abundance. The elephants can hardly be blamed for this problem of befitting proportions. With depleting forest cover, they are fast losing their natural habitat, and are forced to intrude into human settlements for food.

Northeast India has the world's largest concentration of wild Asiatic elephants. Assam and Meghalaya are alone estimated to have more than 7,000. Says M.C. Malakar, Assam's chief wildlife warden: "The last count in 2002 put the number of wild elephants in Assam at 5,246. The number would certainly go up when we have a fresh census in February next year because a lot of calves are being sighted across the state." While some would argue that the elephant population in the region is increasing rapidly, others say the problem is not with the population, but the massive shrinkage of its habitat.

Satellite imagery shot over the period of '96-00 by the National Remote Sensing Agency shows 2,80,000 hectares of forests were cleared in these five years alone. About 18,000 hectares, spread over 10 national parks and game sanctuaries, are currently being encroached upon by illegal settlers, an issue highlighted by environment groups in Assam.

Last fortnight, a herd of around 40 elephants descended from two nearby hillocks after sundown and headed for the valley below, close to Chandan Nukat village in Meghalaya's West Garo Hills district, on the border with Assam. The monsoon was over but the ground was still soft. The elephants loved the conditions. Soon, six from the herd strayed and landed in trouble. Recalls P.R. Marak, the divisional forest officer: "The herd, which had several calves, halted at a sprawling paddy field and started devouring the crop. Soon, a large elephant chose an iron electric pole to scratch its back. The pole tilted under its weight, a power cable snapped, and electrocuted the animal." Five more elephants were electrocuted when they rushed in, hearing the grounded animal's shrieks. Four elephants had died in a similar fashion in the same area in 2004.

In adjoining Assam, a 100-strong elephant herd virtually invaded Majuli, the world's largest freshwater island located in eastern Jorhat district. The 1,50,000 residents at the 850 sq km island on the Brahmaputra had a difficult time ever since the herd made its entry from adjoining areas in early October. "We provided the residents with crackers and kerosene to light torches to keep the elephants away. It was a challenging situation," says Jorhat district magistrate L.S. Changsan. The herd has since been 'chased away' from the island, but after it razed 27 houses in the Bhakat Chapori area. Their occupants had settled in the area after they had lost their original homes, in a different part of the island, to erosion by the Brahmaputra.

"Members of these 27 families, numbering around 200, are staying at a relief camp. Some of the houses have since been repaired, but some are reluctant to spend the nights there for fear of the elephants," says Arindam Baruah, a magistrate in Majuli. Wildlife officials in Assam are moving the authorities for compensation, while the Indian Red Cross Society has rushed 350 'family packets', containing tarpaulin sheets, blankets, mosquito nets etc, to the island. But conservationists say the Bhakat Chapori area lies on a traditional elephant migration route. "The authorities had committed a blunder by re-settling the erosion-hit people there."

Statistics present an alarming picture of the prevailing man-elephant conflict in the region. In Assam, over 600 people have been killed by wild elephants in the past 16 years, at an average of 40 a year. "Wanton destruction of forests in Assam has left the elephants exposed. They are forced to move into human settlements, lured by mature paddy and sugarcane crop," notes Kushal Konwar Sharma, a leading elephant expert who teaches at the College of Veterinary Science in Guwahati. Sharma says the problem is compounded with some elephants having acquired a taste for the fermented rice beer prepared by some communities across the region. "Villagers have told me that elephants at times have dug out beer drums buried under the ground. They have a strong sense of smell." Up to 350 wild elephants, without a 'home' to call their own, are said to be currently roaming the tea gardens in Northern Assam's Sonitpur district. 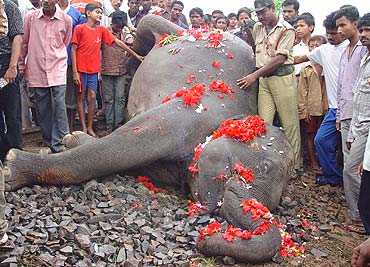 An elephant shot in an Assam tea estate

Retaliation on rampaging elephants by villagers has shocked conservationists. Nineteen wild elephants were poisoned to death in Sonitpur district in 2001 after they feasted on crops and tore down houses. As many as 265 elephants have died across Assam between 2001 and 2006, many of them victims of vengeance by angry humans. Conservation groups have blamed forest and wildlife officials for aggravating the man-elephant conflict through insensitive handling of the problem. "Officials encourage people to chase away elephants by bursting crackers and using flaming torches. This makes the elephants more agitated," says Soumyadeep Dutta, who heads Nature's Beckon, a leading conservation group in Assam. "We must let the elephants feed on standing crops and compensate villagers for crop loss until afforestation schemes take off and yield results," Dutta recommends.

However, such out-of-the-box thinking rarely finds any takers within the bureaucracy. For now, fireworks are the only potent instrument villagers have to keep the pachyderms at bay.