Blinded To The Divisions

An essence of Bharat which is at complete variance with India 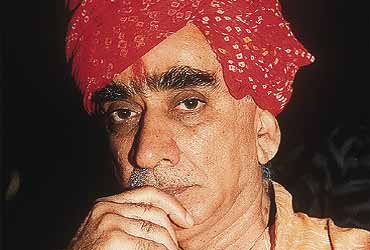 This slim volume of short human stories, first published in The Indian Express in the 1980s, is a treasure of perceptive observations and delightful anecdotes. Jaswant Singh was still in the Opposition, as an ordinary member of Parliament, when he wrote these pieces. We hope that when he goes back into oblivion (perhaps later than sooner) and returns to his roots, he continues to write.

He has captured the essence of Bharat that is so different from India. Perhaps he should have called this a village diary instead of a district diary. Alas, today the district is even further away from the village than it is from Delhi. The gap in perceptions and expectations is enormous and growing wider by the day. The districts are like mini-Delhis all over the country—no permanence, no loyalties, a confused identity and little real power. They have more irritant value and are even more distant from the reality of poverty, corruption and injustice. In these stories, the author has lived through and shared with a cross-section of rural society the anxieties, the tension and the social ceremonies that keep the village as it is today. The widening and indeed tragic gulf between urban and rural India emerges with striking clarity.

The intense, magnified happenings of everyday life in a village of western Rajasthan have been caught with great sensitivity. Sadly, unless one has lived in a village, it may not be possible to fully enjoy the depth and wisdom of these stories. With unforced modesty, Jaswant Singh is at the receiving end of lectures and words of advice from people who are the salt of the earth and who have so much to say with dignity and simplicity—voices that would otherwise never be heard.

Some insights one does expect from this politician at least when he says, “...it never ceases to astonish us how those hands which have never touched the yoke speak with feigned conviction and force about the plight, the difficulties, the concerns of the districts”. This government could have better utilised his understanding and concern by making him a minister of rural development. Failing that, his colleagues would do well to read this enlightening book.

While Jaswant Singh has admirably conveyed the zest and wisdom of village folk, his account is a trifle oblivious of the divisions, conflicts and hardships that pervade people’s lives in rural Rajasthan, especially those of the underprivileged. The book is based on a simple dichotomy between Delhi and “us in the district”.

Except for passing references to social divisions (as in “caste is an important line of discrimination in our society”), the characters appear to live in a largely casteless, classless society. Reading between the lines, one guesses that most of them belong, in fact, to the author’s privileged entourage, described at one point as “my folk”. Dalits and adivasis are rarely mentioned, except for a fond reference to the moving bhajans sung by “the Bheels of the village”. Nor does the book have much to say on the oppression and deprivation endured by Rajasthani women.

This bias is particularly interesting if we note that much of the book was written in the middle of a severe drought, in 1986-88. This was a time of extreme hardship for many, with near-famine conditions prevailing in large parts of the district.

The author himself mentions in passing that half of the district’s population had migrated in search of livelihood at that time. Also, never to miss a barb at the Congress, Singh is quick to ask “why the government fights shy of calling what has struck us in the district (sic), famine”. Except for these passing remarks, however, the devastating effects of the famine are absent from the author’s touching account of village life.

In the light of these lacunae, the traditionalist message of the book is not entirely convincing. At one point, for instance, Singh mentions that in his home “there is neither electricity nor running water, both of which absences I find blissfully restful”. One wonders how this sounds to the person (presumably not Singh himself) who breaks his or her back fetching water and fuel for the author. Fortunately, Singh’s “folk” clearly do not seem to share his traditionalist outlook, at least not in these respects.

In fact, here again the author is at the receiving end of popular wisdom: “You must understand,” says Khem Singhji, “all villages like electric lights...are you not being selfish in resisting what so many others want?” Interestingly, this pragmatism is often combined with a deep attachment to traditions of another sort, such as skillful craftsmanship and the notion that “the mere presence of a policeman in the village (is) a slur on the good name of all”. In this outlook, one gets a glimpse of the possibility of combining the best of tradition and modernity. Let us hope that the genius of the Rajasthan people, so colourfully described in these essays, will be equal to this challenge.

(Jean Dreze, honorary professor at Delhi School of Economics, is co-author with Amartya Sen of Hunger and Public Action; Bunker Roy is founder of the Social Work Research Centre in Tilonia.)

This Way To Ayodhya