Blind Spots On The Runway

To err is inhuman in modern, razor-keen cricket. We need more men...and machinery. 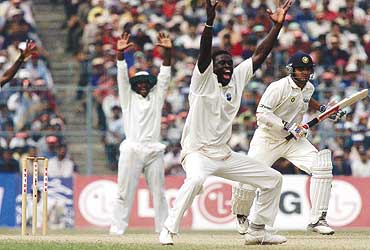 outlookindia.com
-0001-11-30T00:00:00+0553
Sixty-one-year-old David Shepherd is conclusively unmarried but that's not the only reason why many people think he is capable of making good decisions. He is among a highly filtered group of eight umpires whom the International Cricket Council calls The Elite Panel. Men who are so good that when they get it right on the cricket field, traditional opposers of automation in our society shake their heads in admiration and say, "Technology can never replace Man". And when they go wrong, as Shepherd and Asoka De Silva did in the recent Test Series between India and the West Indies, it will be said, "but they are only human".

And that's the whole point. Since they are only human, is the ICC making its umpires travel too much and officiate in too many matches? Should the ICC increase the number of its chosen men so that the burden can be shared? This year Shepherd, the adorable fat man who stands on one leg sometimes to ward off an inauspicious moment or two, could not escape a load of 10 Tests and 16 one-day internationals, which took him to Australia, Sri Lanka, Sharjah, West Indies and twice to India. This year De Silva stood in 11 Tests and would have stood in 14 one-dayers when the current India-West Indies limited over series ends.

If the Lankan umpire is so good—according to the ICC—then fatigue has to be the only reason why he didn't hear the nick off Wavell Hinds' bat early in his useful stay during the Jamshedpur odi. Dravid gobbled the catch, and Nehra was completing the funeral celebrations when it slowly dawned on everybody that De Silva's hand was still in his pocket. Later in the same match, Sarwan was caught lbw by Nehra again but De Silva looked bored with the appeal.

But it's not true that he raises his hand only to hail a cab. In the Calcutta Test, De Silva gave Ganguly out leg before, when the ball was heading towards the fifth stump. This was in fact the third time that De Silva had unfairly judged Ganguly out in four innings! But there was no way Saurav could protest against the umpire. Any natural reaction to injustice from a batsman is unacceptable to the ICC because according to the cricket body, only the umpires are human. Perhaps the only way the captain can protest is to never 'fly Emirates' for that was the recommendation from the back of De Silva's sponsored coat. Before Ganguly, the Sri Lankan had also given Dravid out lbw when the ball had clearly hit the bat first. Dravid must be wondering what is so elite about the panel because Shepherd gave a similar decision against him in the first innings.

Mervyn Dillon and Sarwan too were victims in a series that was mysteriously filled with strange umpiring decisions. That's why observers like Ravi Shastri and Ian Bishop feel umpires are travelling too much and standing in more matches than they can handle.

ICC chief Malcolm Gray, however, disagrees. He told Outlook<, "There is always criticism of umpires. That's natural. But I do not agree that they are standing in too many matches or travelling too much. They get enough rest and are experienced enough to do their jobs. We did an extensive study some time ago and found that 94 per cent of decisions made by the selected umpires were correct. Now that's a good record. This study was conducted before the group of selected umpires was furthered shortlisted to include just eight of the best. So I would say the ratio is much higher now."

ICC's elite panel came into effect only in April 2002. After the eight were chosen, it was deemed that only they will officiate in Tests while one of them will stand in one-dayers along with a home umpire. The selection of the panel was made after taking many factors into account, including nominations of all Test team captains, who, over the last four years, were giving marks to individual umpires after every match.Each of these eight will stand in about 12 Test matches and 15 one-dayers every year, effectively standing by the wickets for about 75 days a year. So England's David Shepherd has stood in 10 Tests and 16 odis this year alone while in 16 years not counting 2002, he stood in just 57 Tests and 97 odis, an average of just over three Tests and six odis a year before the panel came into being. Indeed, other than David Orchard, all of them are working far harder than they have ever done before (see statistics below). For instance, Zimbabwe's Russell Tiffin stood in 23 Tests and 33 odis in about nine years till the end of 2001, at an average of just above two Tests and just over three odis a year. But this year he has already seen seven Tests and 18 odis. "All this doesn't tire me," says Tiffin. "I am fit and I do not believe that there is fatigue. The hectic schedule doesn't affect my judgement."

Former Indian umpire Piloo Reporter who stood in 14 Tests and 24 odis, much before umpires were called elite and such things, explains the logic behind selecting only eight. "Earlier, umpiring was a prasad that your country's cricket board distributed. Everybody, irrespective of whether he is good or bad, got the prasad. Now they want some select men to get all the prasad." Reporter is for the introduction of technology to balance what ICC calls "natural human error". He says: "There was a time when the batsman would know he is run out but won't walk because the umpire may just go wrong. Now he starts walking to the boundary even before the light turns red. The only hope he has is a circuit failure which normally doesn't happen."

Very soon the ICC will decide if lbw decisions can be referred to the third umpire during the World Cup and one hopes traditionalists will not say technology is taking over man. After all, nobody plays cricket to determine if umpires are "only human".