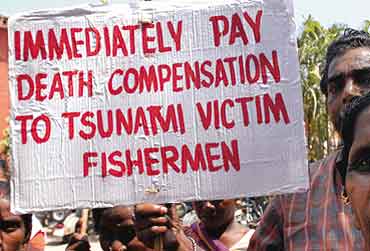 It's too early, some might say. But for Shobita, sitting in a makeshift tent of canvas and plastic sheets, the rising heat means greater suffering. The cartons of tents donated by a Japanese NGO lying a few metres away are off-limits for her and her 265 co-habitants. "An official came and told the camp in-charge that we can't open them till they hold a ceremony. That was a week ago," says her husband. Shobita has given up and walks a mile in search of a little privacy for a bath that has been denied to her for days. In the name of relief, Gobardhan also waves a press release in your face. It is courtesy local MP Manoranjan Bhakta and says he has made several demands for compensation and that a "positive response" is expected soon.

Gobardhan's is a sorry tale shared by nearly 70,000 other displaced in the ravaged islands. In fact, in the 13 islands of the Nicobar group, almost the entire surviving population—numbering over 27,000—is still in relief camps. Lack of planning, coordination and perspective coupled with bureaucratic sloth and insensitivity has bogged down the relief effort in the Andamans, rendering it insufficient and raising several perturbing questions. Among them: