A computer-controlled home, everything's perfect? Not quite. 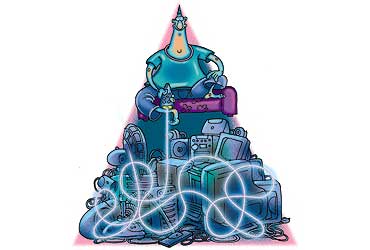 outlookindia.com
-0001-11-30T00:00:00+0553
Are you one of those who finds it a chore switching appliances on and off at home, who hates groping in the dark.... Well, then you are a likely candidate for a peculiar obsession that seemingly has its roots in testosterone.

Wouldn’t it be nice if the lights came on in response to your regal presence and went off when you disappeared; if you could flip a switch as you sleepily stretch in the morning setting off the coffee-maker; if you could control your home appliances from a universal remote; if you could buzz a switch on your car key fob that, on your arrival, sets off a pattern of lights and appliances that you can program on your PC; if you could observe your home remotely from work to check if your gardener is earning his pay or goofing off...the list is endless. You may think you’ll need Bill Gates’ income to have these wishes come true—but that would be incorrect.

But beware; the excitement generated by these exciting new toys could also result in some serious disharmony with those members of the household who don’t write ‘M’ in the sex column box. I myself got hooked while having a casual conversation at a friend’s home as he showed off his new acquisition. A not too expensive home automation kit that magically transformed home into fairytale land with remote switching that made channel surfing look tame. (A receiver module, receiving wireless commands, is plugged into an electrical outlet. Power cords from appliances are plugged into addressable modules, which in turn are plugged into wall sockets. The remote control commands accessed by the receiver communicates with the appropriate module, based on its address, through the already in place house wiring.)

Those of you inclined to nitpick may ask what the benefit is, if you have to lug the remote around. The answer comes in the form of wireless wall switch modules placed at strategic locations. What about the lights then, pre-wired into the house circuit? Well, replace the existing wall switches with identical addressable ones. Not anonymous anymore, they bask in new-found glory.

I lost no time in getting myself this magic kit. I ordered it on the Net. What’s the point in buying remote control toys from a store?

Mild objections from the other side of the great gender divide ensued. Some sample exchanges:

Why should I remember the addresses of all the switches? It’s just a matter of time. When we moved in, didn’t it take a while to figure all the switches out? You’ll get used to it. Why do I have to search for a remote whenever I want to operate something? But the wall switches have been strategically placed, neatly labelled. Now you can dim the lights to the desired level, which you couldn’t before.

Then came the motion sensors. These detect human (and not so human) activity thermally. They can be programmed to activate a single-addressed or chain of appliances, programmed on your PC.

By this time, I had started programming events too. This included reminders (as addressable chimes), lights that automatically come on and go off based on the time of the year and day, and recording of on/off behavior of appliances which could be played back for the benefit of potential burglars while we were away on vacation.

And then it got really interesting. Tiny remote cameras came into the picture. They could send wireless pictures to any receiver in the house, watched connected to a TV, VCR or PC. So I started an 8-hour surveillance tape which I played in FF mode after returning from work. But this got tiresome and I got myself a VCR commander module that could receive commands from a sensor in the driveway—it recorded when activity was detected, stopping after a few minutes. It was fun to watch the mailman or courier guy depositing stuff for a while, and hugely disappointing not to see burglars or wild animals prowling about.

While all this was going on, ceasefire zones had been declared. Certain switches, appliances were marked "out of bounds". Whenever I looked longingly at them, I would hear: "Don’t even think about it." But I did score some victories. Even my critics admitted the motion sensor at the bottom of the staircase, which switched on the landing light for a minute and then switched off, was a huge hit.

Then the chinks started to appear. The heat sensing motion sensors didn’t function perfectly on hot days. An accidental press of a button switched on all the lights in the house. Non-human activity (cats, fierce winds) set off the front yard sensor, chiming off false alarms. Then the vacuum cleaner gobbled up the VCR commander wires. It would be uncharitable to suggest it was an intentional act but I am sure metaphysical forces conspired against me. It was all very well to turn on the coffeemaker from the bed, but it worked only if you put in the coffee and water before going to sleep. The biggest disappointment was not reaching ‘the goal’, of remote monitoring the house from work through strategically placed cameras hooked onto the Web. The technology was just not mature enough to deliver that one.

I am down but not out. Better days will prevail, I will dust off my equipment, upgrade, reconfigure, reprogram, regroup. And come out with all remotes blazing.

(The author, a software engineer, is based in Silicon Valley)