despite its good-hearted commitment to nationalism and communal harmony, the message gets mixed and convoluted. 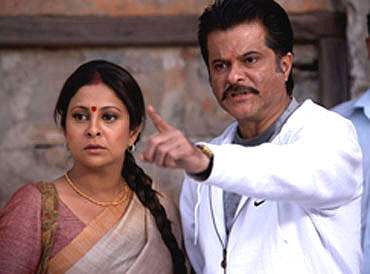 The best thing about the film is Gaffar Ali, the Muslim patriarch played effortlessly by theatre doyen Habib Tanvir. He embodies the vanishing warmth and harmony of the narrow lanes of Old Delhi. Gaffar is also one of the few sane, but largely ineffectual Muslim characters in the film (the singer Raahat and the Urdu newspaper editor among others); the rest are fanatics—jehadis and fidayeens, the double-faced politicians and Rajya Sabha members. That’s my problem with Subhash Ghai’s Black and White—despite its good-hearted commitment to nationalism and communal harmony, the message gets mixed and convoluted.

Take the character of Rajan Mathur (Kapoor), the professor who brings about a change in the young terrorist Numair (newcomer Sinha). It’s quite clearly inspired by S.A.R. Geelani, the young DU prof who was accused of being part of the conspiracy to attack the Parliament. Why did Ghai have to change Geelani’s religion and turn him a Hindu on screen? Then again, why does this Hindu prof have to interpret the true meaning of the Quran for misguided Muslim youth? The film would have worked far better had this debate between the liberal and the orthodox forces happened within the Muslim fold, the soul-searching within would have had far more power and punch.

One of the fanatics in the film talks about how killing a terrorist is not enough, you have to dig far deeper to try and understand why a terrorist is born. Ghai’s intentions are good, but not well realised because he never takes you inside the mind of the maniac. What makes Numair a terrorist gets quickly explained in one song. There are other loopholes. Why make him an Afghani posing as an orphan of the Gujarat riots, wouldn’t being a Gujarati Muslim be enough? Or was Ghai intent on giving a US angle to Islamic terrorism? But then, he doesn’t spell that out other than Numair’s mom, a woman vaguely talking of the world having progressed at Afghanistan’s expense.

Anil Kapoor is efficient, Shefali Shah goes over-the-top while newcomer Anurag Sinha has little else to do other than knit his brow, dig his hands deep into the trouser pockets and talk about "Islam ki izzat".

The History Of Violence