Fundamentalist by 'birth, instinct, training', his aggressive motto is 'Next year, Lahore'. 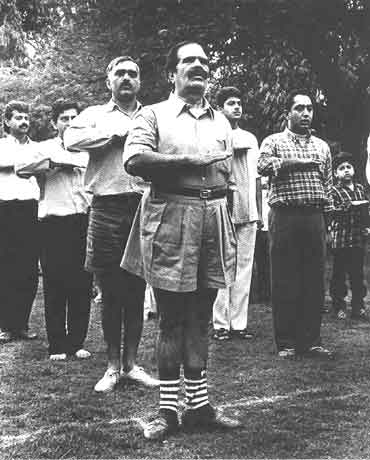 WHEN Partition happened, I was 18 and a full-time pracharak with the RSS. In Sialkot, district Narwal, where I lived, I tried to organise Hindus to fight, learn to repulse Muslim attacks. I remember 1947 all too vividly. I recall selling our house in Lahore for a pittance: Rs 3,000 when the market price was a lakh. The sight of Hindu women stripped in public, breasts slashed, genitals mutilated. I saw 500 women take jalsamadhi in Atak river to escape being raped by Muslim rioters.

Hindu resistance theek maatra mein nahin hui (wasn't equivalent). Hindus were more interested in looting rather than killing. Hindu women produce rats. Not fighters. That's why we lost our self-respect, our women, our izzat , Punjab, Sindh, Kashmir to the Muslims in 1947. And now these Muslim Bengalis are infiltrating our land. Asking for the creation of a Muslim Bangabhumi. I tell you in hardly 10 years India will be a Muslim country. Musllm men are seducing Hindu women, reducing us to a minority. They know how to seduce: with kohl, bangles, dupattas. Their diet is uttejak (aphrodisiacal). Full of sex. Beef is full of sex. They mix it in liquor to feed their female victims. Unless we take stock of the situation we'll all be wiped out.

I'm a Parshurami pandit. Fundamentalist by birth, instinct, training. We believe politics must be Hinduised, Hindus must be militarised. Hindus should stop being ch***s. We should take revenge. Arey, bhagwan nazdeek hai ya mukka? (Why appeal to god when you have your fist?) Aakramak (aggressive) Hindu samaj is the only answer to our problems. Every three months I look at the pictures of those naked Peshawar women and weep. Those Mussalman put*****de should be taught a lesson. Yeh aag bjhne nahin deni· (we shouldn't let this fire die out). I only live for the day when the tiranga (the tricolour) will be unfurled on Pakistani territory. We should be like the Israelis. They greet each other with a "Next year in Jerusalem"; we should say "Next year in Lahore".

Today Hindus are learning to hit back. At Zimmi near Gorakhpur when Muslims wouldn't stop their noisy azaan , I too recorded a pig's squeal and put it on the loudspeaker. "This is Vishnu's varahavtar sound," I told the mullahs when they objected to' the sound. Their azaan noise stopped the same day. That's the way to do it. Hindu hands they were that installed Ram lalla in Babri Masjid in '49 and yet again in '90. And we'll not rest till we get Mathura, Kashi Vishwanath back. And yes, what these Muslims call Pakistan, back.