BJP president Amit Shah who is possibly facing his toughest political test on the Bihar Elections. 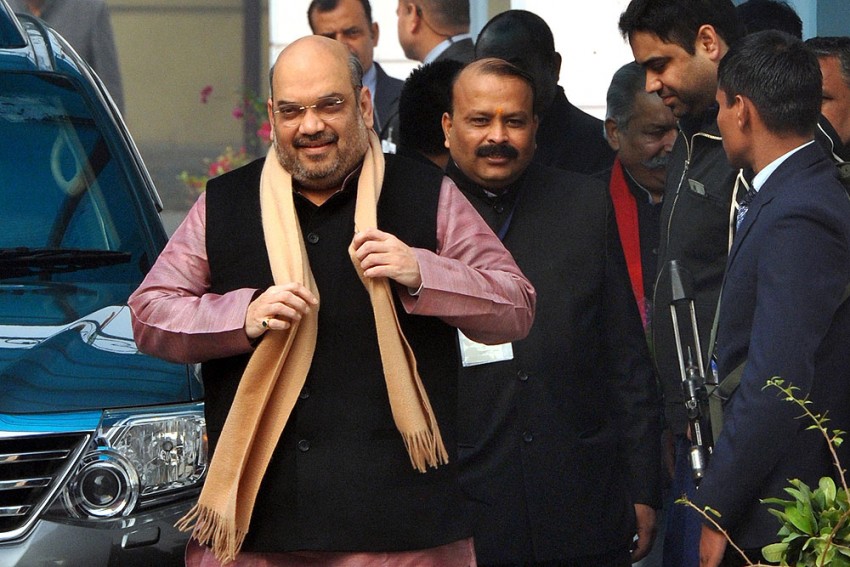 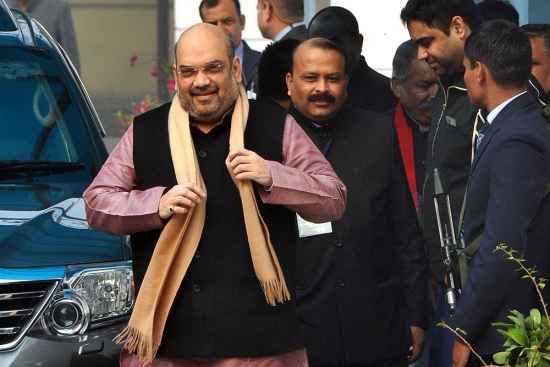 While he’s loath to admit it, BJP president Amit Shah is possibly facing his toughest political test in Bihar. He keeps a poker face and predicts a landslide victory for his party. But he has been camping in Patna far beyond the planned six days. And instead of addressing party workers, he’s chopper-hopping about, addressing political meetings. He took time off to speak to Kumar Pankaj on the Bihar elections. Excerpts:

How confident are you of winning?

Look at the size of the rallies being addressed by party leaders, look at the enthusiasm the crowds show. It would leave no doubts in any observer that the NDA is set for a landslide and will bag two-thirds of the seats. There’s a discernible wave for change. People are looking for a better dispensation.

What are the issues on which this election is being fought?

Development of Bihar is the only issue. People have seen good governance at the Centre and they trust the prime minister. Biharis have given enough opportunities to the Congress, to Laloo Prasad Yadav and to Nitish Kumar. But the ground realities are disappointing as ever. We are determined to improve the situation in Bihar. The PM has already announced a Rs 1.65 lakh-crore package for the state and we will ensure every paisa is spent on improving the state.

Your rivals say the package is a mere repackaging of old schemes.

The Centre, headed by Narendra Modi, got the surveys done, initiated the changes in the policies, allocated the funds and put up a structure, a model of development. It was after this the package of Rs 1.65 lakh-crore was announced. Ongoing schemes have also been granted an additional Rs 40,000 crore. The total amounts to three annual budgets of the state. But what did the UPA government do? They gave Bihar only Rs 10,000 crore annually. That’s why we need a government in Bihar that will work together with the Centre.

The PM has consistently maintained that while western India has steadily developed, eastern India has progressively lagged behind. That’s why our entire focus is on the eastern states of Bihar, Orissa, West Bengal and Jhar­khand. I must tell you that as far as development goes, the PM is not bothered about politics and rises above politics. He is committed to the development of eastern India. Nitish Kumar has been saying Bihar doesn’t need anyone’s help. But nobody is doing Bihar a special favour. The state is entitled to the announced package.

“When I said Laloo was a chara chor, I was only stating a fact. He was convicted. I’ve been exonerated in all cases.”

Do you think the talk of the return of ‘jungle raj’ is influencing voters?

The people of Bihar have seen how the situation has worsened in the state after BJP left the coalition government. The JD(U) government in the state failed on all counts and there is no reason why people would repose their trust again on the JD(U)-RJD alliance.

Do you see the mahagathbandhan putting up a tough fight?

There cannot be a better example of an opportunistic and immoral alliance. For 15 years, Nitish Kumar was vocal against the ‘jungle raj’ of Laloo Prasad Yadav. Today, he has forgotten his own stand and joined hands with Laloo Prasad Yadav to try to retain the CM’s office. I never cease to be amazed when I hear him say Laloo’s regime wasn’t ‘jungle raj’. Both Nitish and Laloo built their political careers opposing the Congress. Now, they’ve joined up with the Congress, forgetting that Ram Manohar Lohia, Karpoori Thakur and Jayaprakash Narayan always opposed the Congress. 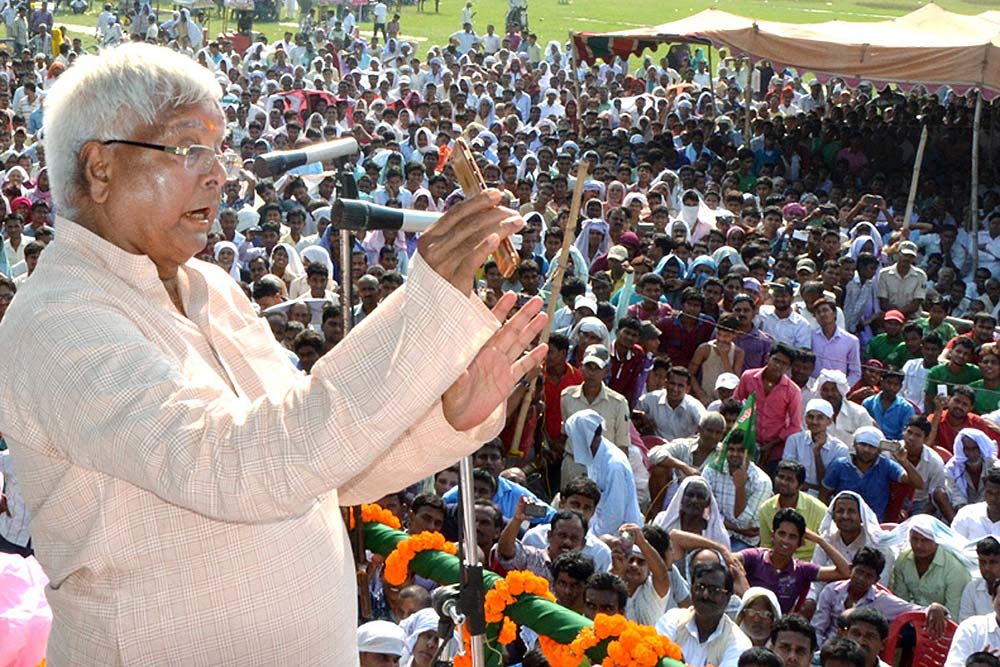 Do you regret not projecting a CM candidate? Will it affect your chances?

We did not project any candidate during elections in Haryana, Maharashtra, Jharkhand or Jammu and Kashmir. But we won in all the four states. We are focussed on winning the election and our leaders are in direct contact with some 2 lakh people on a daily basis. The number goes up every time Narendrabhai addresses rallies. The BJP is a cadre- based party and there is  no dearth of people who can provide leadership. I do not think this is a handicap.

Isn’t Nitish Kumar a formidable opponent? After all, he has been the CM for nearly 10 years despite not belonging to a large caste group. His Kurmi caste comprises only four per cent of the state’s population?

Nitish Kumar was propped up by the BJP’s 90 mlas and our dedicated cadres. He now has the support of neither. Victory in elections does not depend only on arithmetic, in which one plus one always equals two, but also on chemistry, in which one plus one can also result in three, or a third factor being created. By aligning with Laloo Yadav, Nitish Kumar has compromised on both the development plank and on his social engineering initiatives. With Dalits, the most backward castes and the extremely backward castes feeling insecure, how long can his social engineering prop him up?

The election campaign has been marked by a sustained war of words between you and Laloo Prasad Yadav. Has it helped?

Lalooji is clearly worried and fears a rout. This is getting reflected in what he says and has lowered the standard of public discourse. While I am concerned about the language he uses in public and his choice of words, they do not affect me personally. When I said he was a ‘chara chor’, I was only stating a fact—that Laloo Prasad Yadav had been convicted in the fodder scam and is out on bail. On the other hand, I have been exonerated in all the cases in which, for political reasons, I had been implicated.

There appears to be considerable discontent within your party over ticket distribution, and some of your MPs have accused leaders of selling election tickets. What’s your take?

There are, of course, thousands of claimants for the party tickets, but unfortunately, there are only 243 seats. So naturally, all claimants cannot get election tickets and many are disappointed. Some give vent to their frustration. But there is no truth in the allegations. We follow a well-laid-out procedure, and only the deserving get the nod.

What if neither alliance gets a clear majority in the elections?

There is no question of a hung house. I have sensed the rumblings on the ground. The NDA is all set to form the government and the BJP alone, I believe, will win 120 seats.

What’s your reaction on the controversy over a ban on beef?

We are opposed to cow slaughter. The cow is worshipped throughout the country, and in our culture, the cow has been raised to the status of a mother. All BJP-ruled states have enforced a ban on cow slaughter and once we win in Bihar, we will do so here also. I am incredibly hurt by the statements made by Laloo Prasad Yadav and other senior leaders of the RJD. For us it is not a political but a cultural issue.

“The PM is identified with change, development and dynamism across India. So not suprisingly, he’s the face of our campaign.”

But the BJP did lose the Delhi election. Bihar must surely be a challenge?

To the extent that Bihar is a large and complex state, yes, it’s a challenge. The dynamics of every constituency is different. But despite caste differences, every community wants electricity, supply of drinking water, good roads, jobs and investment in industry. The Ganga runs through Bihar, but farmers here still depend on the rain. The law and order situation has all but collapsed. I have no doubt, therefore, that people have already decided to give the BJP a chance.

Why have you ignored state-level leaders in favour of the PM, who has become the face of your campaign?

You are right in pointing out that the BJP has several state-level leaders. But today it’s Prime Minister Narendra Modi who symbolises an aspirational India. He stands for development, and across the country, he is identified with change, development, dynamism. It should therefore not come as a surprise that he is the face of our campaign.

What is the BJP’s stand on quotas?

The BJP supports the present system of reservation. And it is not in favour of any change. Leaders like Laloo Yadav are lying and spreading disinformation.

Hasn’t the BJP’s promise of ‘Achhe Din’ boomeranged on the party?

This never fails to amaze me. The NDA government has been in office for just 15 months after 10 long years of corrupt rule by the UPA. During this short period, foreign investment has gone up, several economic policies have been put in place, the rate of growth has improved and the Indian economy is stable despite upheavals elsewhere. India is like an oasis.