An India-dubbed Doraemon irks Dhaka. So, the cat is banished. 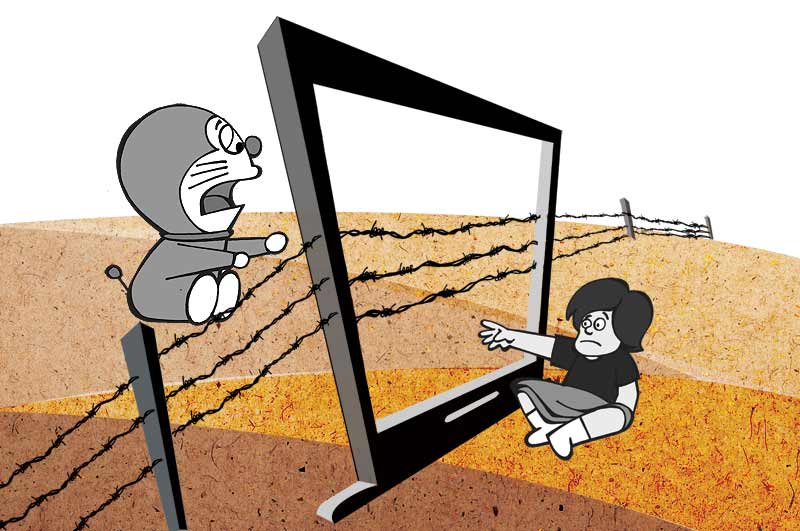 Aretort in Hindi from her six-year-old daughter was quite the last thing Dhaka-based Nusrat Jahan expected while reprimanding her. But that’s just how it turned out to be. “Tumko sabak sikhaoonga,” she shot back at her, just like one of her favourite characters in Doraemon, leaving her mother seriously worried about the impact the cartoon show, beamed into Bangladesh in Hindi on an Indian channel, was having on her behaviour and Bengali language skills. “I am more concerned about the cartoon’s content and what it has done to her behaviour, but there is also the language problem,” says Nusrat on phone from Dhaka. “Whatever kids watch more, they learn more of it.”

Her daughter Paloma clearly never had enough of the adorable (or pesky!) Hindi-speaking cross between a cat and robot until the government decided to pull the plug on Doraemon. Nusrat was not the only harried one. While many parents, not just in Bangladesh but also elsewhere, are indeed concerned about its content (some say it encourages lying and cheating), what really propelled the Japanese manga character into becoming a nati­onal crisis for our eastern neighbour was how it led many children to adulterate their Bangla with Hindi. The media noted with dismay how Ban­gladeshi children hooked to Dorae­mon were mouthing gibberish like “Amake ekta chocolate khila do” or “Ma, tumi amake ekta baat bolo”, and talk shows deliberated on this dilution of national identity to no end. In a country founded on the cause of Bengali nationalism, watching the future generation grow with chinks in their Bengali armour is both sacrilege and betrayal for many. “For the same reason, we did not accept Urdu, even though that was a golden opportunity to learn a foreign language. For the same reason, I call on all to resist the imperialism of Hindi language. Joi Bangla!” wrote blogger Bratya Raisu.

Reacting to the outcry, which peaked around February 21 (the day Bangladesh commemorates the 1952 killing of stude­nts in police firing as they protested the imposition of Urdu, and cel­ebra­tes as the Int­ernational Mother Lan­guage Day), the government asked cable operators to block the channels showing Doraemon and other Japanese cartoons like Ninja Hattori-kun and Hagemaru as also Chhota Bheem, all telecast in Hindi.

None, however, came close to Dorae­mon’s popularity, indeed influence, compounded by an appetite for show-related merchandise. It even provoked research last year that claimed that of the 500 children between the ages of five and eight interviewed in Dhaka, 466 could speak Hindi more fluently than English because of Dorae­mon, and were mixing Hindi and Bangla. Nujhat Nuari Islam and Tuhin Biswas, authors of the paper, pushed Bangladeshi investors to have Doraemon dubbed into Bangla. “If Indian TV channels can broadcast Dor­aemon in the Hindi language, Bang­la­deshi investors too should invest in this animation sector. Thus, the language will not be mixed with Hindi. Bangladeshi cartoon companies may dub Doraemon and telecast it through Bangla channels,” they wrote.

The controversy also took on political undertones given the widespread resentment against India and a Hindi “cultural invasion”, even if there are many who delightedly acquiesce in the latter, making Indian soap operas, not just those in Bangla but also in Hindi, extremely popular. Pirated copies of Indian movies are widely sold despite a ban on Bollywood that has been in place since 1972. Bangladeshi weddings too now feature bhangra tracks. “I don’t think there was anything anti-India as the same parents who opposed Dorae­mon continue to watch many Hindi channels,” says Ershad Kamol, the cultural affairs editor for English daily New Age. But some like Nondini Monwar, whose father Mustafa Monwar created Moner Kotha, a popular cartoon series that runs on national television, believe there wouldn’t have been a similar outcry had Doraemon been telecast in, say, either English or Arabic. “There is a certain anti-India sentiment at play here, but I feel there’s nothing wrong in our kids learning another language naturally, even if it’s Hindi.”

What rankles many is not that Indian channels (or culture) have such an app­eal but the fact that Bangladeshi channels are completely inaccessible in India. “There is no balance of power here. Why can’t I access Bangladeshi channels in Calcutta the way Indians access their channels in Dhaka?” asks Faruq Hasan, editor of Dhaka Weekend Tribune and who supported the ban on Doraemon for this reason. Writing a column on this issue last month, he argued, “The move got my support not because of its pedagogical claims or patriotic fervour, but simply because of the political res­ponse—however negligible or slight—it sends to our Big Brother Neighbour across the other side. What vexes is the utter unilateral nature of flow; not once have I seen anything from Bangladesh telecast in any part of India.” That Bangladeshis are forced to watch many of their favourite English programmes dubbed in Hindi for the benefit of Indian audiences doesn’t help either. “We don’t hold Hindi and English at the same level. There is a feeling that Hindi is shoved down our throats, that we are not given a choice,” he adds.

Just as it teaches India to be more open to Bangladeshi cultural exports, the uproar over Doraemon has lessons for Bangladesh too, especially the need to augment its meagre offering of children-specific programming. Sisimpur, a Bengali adaptation of the American Sesame Street, and Meena, a UNICEF-sponsored series that revolves around an eponymous girl and social issues, are often cited there as an ideal way forward for children’s television entertainment. “But there is a lack of proper assessment and, certainly, there isn’t any specific policy related to children’s programming,” says S.M. Shameem Reza, associate professor of mass communication and journalism at University of Dhaka.

Evoking Hindi “cultural and linguistic hegemony” to put a lid on Doraemon also ought to make the Bangladeshis reflect on the Bengali hegemony its indigenous peoples in the Chittagong Hill Tracts are subjected to. While there is some radio programming in a few indigenous languages, says Reza, there is hardly any on television. “Certainly, there is very little for indigenous children.” Some point out that domination takes less subtle forms: like an aggressively promoted settlement of mainlanders in cht and discrimination against non-Bengalis.

One of the rallying cries of the Shah­bag movement—“Tumi ke, Aami ke? Bangali, Bangali! (Who are you? Who am I? Bengali, Bengali)—was contested by the indigenous Bang­la­deshis who arg­ued that Bengali ought to be replaced with ‘Bangladeshi’ or at least make space for ‘Adivasi’. Says Hasan, “Unfortunately, in public discourse popular nationalism goes back to being Bengali and being Muslim.” Must being Bangladeshi be synonymous with being Bengali? Few would have thought a manga character could lead to such introspection on both sides of the border.

The Medium Becomes The Managed