Cloning may still be a distant reality, but in just a year since its encryption, the Genome is rewriting medical history 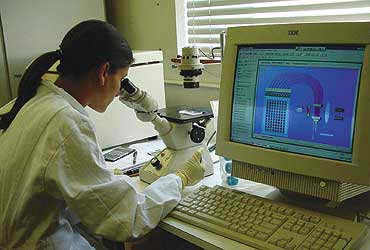 outlookindia.com
-0001-11-30T00:00:00+0553
The new Superman will still need more than a red tunic if he wants to fly. But he'll be stronger than us, he'll live much longer—and he'll be for real. They're working on this biotechnological feat in those labs in the US, in Britain, in Germany, and a little even in India. He'll be in shape unrecognisable from ours less than 20 years from now. The trouble is that this new biotechnology product is more than likely to be white.

The past one year has seen an explosion of research following publication of the Genome, the name given to the complete sequence of genes that make up a human. The entire genome sequence has been available free on the Net for some time and that was only the starting point for quite a race. Says Dr Peter Shepherd of the University College of London: "It's like being given a map of the world before anyone set out to see what it was like. Think how much easier it would have been to discover the world if everyone had a complete and detailed map of it beforehand."

Map in hand, scientists are now out on a treasure hunt—a one-shot drug that kills infection within three hours, a quick cure for breast cancer, diabetes treated so easily that it's not a disease any more, a brain tumour weeded out...these aren't just dream cures any more.

Now that genetics has shown what makes a physical human tick and how, scientists have a far easier job looking for the right tools to set right whatever goes wrong. The real fallout isn't anything as melodramatic as cloning—it is research into diseases and their treatment at the source. Which means money for some, life for others. The competition for military one-upmanship has receded, the buzzword now is to forge ahead in biotechnology.

The new target is a better life for a paying person. Says Sue Charles of The Wolfson Institute for Biomedical Research: "Everyone wants to live longer and healthier." And the new research is developing medicines that help people do just that. Says she: "Our initial focus is in cancer and we already have a potential blockbuster discovery in breast cancer and an exciting pre-clinical programme for brain tumours."

Dr Shepherd is on to such exciting discoveries in cell research that he has branched out from academics to launch his own company, Xcellsyz, "to exploit research" originating in the University College, London, and at centres he set up in Newcastle and Barcelona. "The human genome and the human cell are a powerful combination," says he. Xcellsyz, researching in diseases like diabetes and cancer, promises to have a cure "within 10 to 15 years definitely." Others see products with dramatic results entering the market in the next two to four years.

But, says Ken Powell, ceo of Arrow Therapeutics, all the research is being clearly driven by profit. "Drug development offers far larger rewards than other technology platforms. We are focusing on anti-infection and it's a good area to be in." Powell claims his company has used gene technology to develop a compound that can kill an infection within three hours with just one shot. The compound will enter the first phase of use next year. And Arrow isn't the only one. With an estimated market worth $20 billion a year, many companies are working to find a genetic way of conquering an infection. Arrow plans to sell its technology to drug companies for a combination of "upfront, milestone and royalty payments."

Inevitably, this leads to questions about patents and the price at which the drugs will be sold."Patenting here is going to be a big issue," says Powell. The American lobby that wanted the genome itself to be patented lost out to the Britain-based Human Genome Project which posted the entire data free on the Internet. But nobody is suggesting that drugs developed on the basis of that information will not be patent-protected. They will come at a price—and it's not going to be a price easily affordable by the poor in developing countries.

If the genome is available free, why can't Indian scientists do what their counterparts are doing in the West? Ironically, the genome data has generated far more interest in India than any other developing country—in a couple of months after it hit the Web, the public databases were accessed 1,60,000 times in India, 61,000 times in Mexico, and about 50,000 times each in China and Brazil. It is being accessed daily by about 10,000 organisations worldwide.

But Indian drug companies have been slow to back interest with money. A leading research firm in London is trying to rope in Indian scientists, hoping to exploit their frustration in conducting research because of bureaucrats and ignorant managers.

Dr Mike Dexter, director of the Wellcome Trust which spent $350 million in researching the genome, says publication of the data on the Net is "a free gift to the world." He adds: "Had the data only been available commercially, many in the developing world would not have had access to it. They simply could not afford it! By maintaining the principle of equal, free access for all, we have contributed to narrowing the gap between the rich, developed scientific world and our colleagues in poorer countries."

But the "free gift" will not mean affordable cures. Says Dr Graham Cameron, director of the European Bioinformatics Institute (ebi) at the Wellcome Trust Genome Campus in Cambridgeshire: "We recognise that developing medicines depends on patents and that applications of the data will be developed in commercial sectors." While the data is free, "applications and products will be patented," says Dr Cameron.

That Western multinationals would take out the bulk of patents based on the freely available data was "always a danger," according to Cameron. He adds: "The developed world is better-equipped to research and produce medicines. The genome itself does not lead to medicines—this is just basic information that can enable the development of medicines." The ability to develop useful drugs will depend greatly "on the investment someone can bring to it," he says. Thanks to the Net, Indian scientists know what is there to know, but still can't do what there is to do.

It will also be hard to catch up with the rush of research in the West. Over the last year or so, 55 new companies have been set up in London. Says Simon Tarpey, director of the London Biotechnology Network, a government- and business-funded group leading the development of biotech research: "We are creating lab facilities for more new developments. We're working to gather information on what's happening in the field, and to bringing companies together."

Europe is still way behind the US in the new research. There are 1,570 biotech companies in Europe and 1,270 in the US, but the average revenue of a European company is about $6 million, less than a third of the average of a US company, says Charles. Amgen, the biggest biotech company in the US, alone is almost the same size as the whole of European biotech."The US is prepared to back biotech with big bucks," says Charles, adding: "Europe drip-feeds its industry." And India starves its.

British institutions are putting universities and business together to marry research and profit. Some of London's best-known institutions like King's, Imperial and University Colleges have all established a number of wholly-owned subsidiary companies to promote spin-out companies and technology transfer. The rewards are so promising that the research would be profitable even if just one in ten drugs succeeds, says Powell. Indian talent has hit the genome trail and could do all this and better—but only if government and business would give them a chance.