In a gutsy move, the Inter-State Council moves to Srinagar. Then a suicide attack happens. 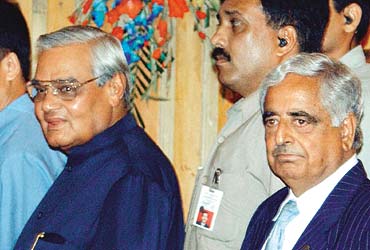 The pointed symbolism did not escape anyone in Srinagar. When the Centre decided to change the venue of the Inter-State Council meeting from New Delhi to J&K's summer capital, it was sending out an emphatic message to the people of Kashmir as well as the international community. The subtext: normalcy had returned to the Valley and the Centre was supportive and sympathetic to Mufti Mohammed Sayeed's healing touch policy. Sadly, the cheer couldn't last for long.

The meeting of chief ministers and lieutenant-governors from across the country on the sprawling lawns of Srinagar's newly built Sher-e-Kashmir International Convention Complex (SKICC) was indeed impressive. And when Prime Minister A.B. Vajpayee spoke of the shimmering waters of the Dal Lake and how tourists had returned to Kashmir, everyone applauded. But soon a louder noise ripped through the gathering. As Vajpayee was concluding his inaugural address, a suicide attack shook the nearby headquarters of Bharat Sanchar Nigam Limited (BSNL). Militant-turned-politician Javed Shah, his security guard and two others were killed in the 12-hour encounter between two militants and security forces.

Srinagar was once again on the edge. The terrorists had chosen the BSNL office where people had queued up last fortnight to apply for mobile phones. When security forces landed up, the militants moved to an adjacent hotel from which Javed Shah ran his newspaper, Watan.

The police say the intention was clearly to disrupt the Inter-State Council meet. "We had intelligence inputs that the militants were planning to strike around the meeting venue. We ensured that they failed to carry out their plans," says K. Rajendra, IG (Kashmir range). Before this attack, militants had shot dead two securitymen at close range in Srinagar's high security zone and escaped.

The psychological impact of such incidents...