BJP is No. 2 with more votes than CPI(M) and Congress, but it still may not win many seats 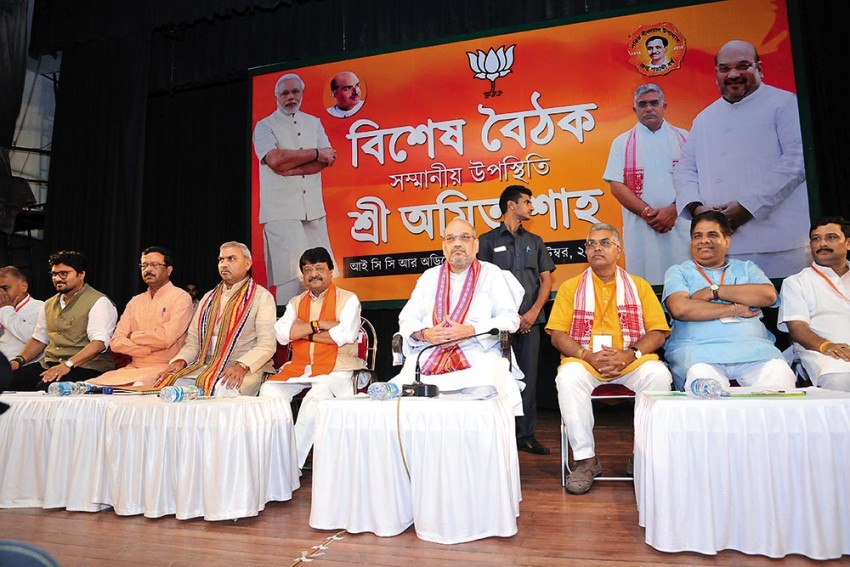 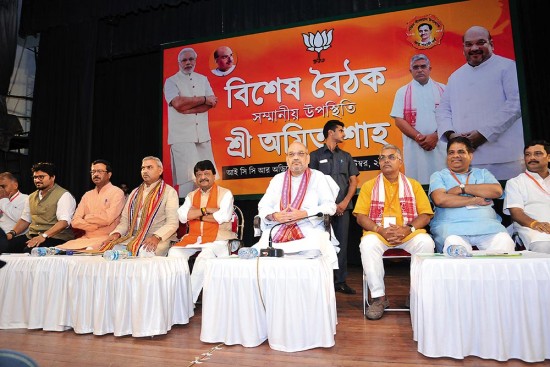 West Bengal presents a bit of a paradox as far as the BJP’s potential growth graph is concerned. Recent polls have registered a surge in voteshare: it has virtually zoomed from an also-ran to the number two position, replacing the CPI(M) and Congress. Yet, the ruling Trinamool Congress looms so large over Bengal that—while being an interesting mar­ker of the BJP’s own ‘Look East’ policy—it’s not expected to inflect the national calculus in any significant way.

Of its 294 assembly seats, the BJP occupies only three. And of the 42 MPs the state sends to Delhi, only two are from BJP—and that’s while riding the crest of the Modi wave in 2014. So even if that first figure looks set to improve, any conceivable growth in the second can only be marginal and of symbolic value—not enough to tilt the scales anywhere else.

“The two constituencies it won hardly counted as an indication in 2014,” says political scientist Biswanath Chakraborty. “Darjeeling was anyway held by the BJP for three consecutive terms, mainly due to its promise to look into the demand for a separate state. And in Asansol, an industrial town, it was more a diktat against the Trinamool’s lack of initiative for business enterprises.”

Political pundits therefore feel that if the BJP couldn’t make inroads into Bengal in the first flush of the Modi adulation that swept the country, falling for it now, after one round of incumbency, is less likely. Not that the BJP hasn’t been trying. Even for the 2016 assembly campaign, Modi and party chief Amit Shah descended on Bengal in helicopters and addressed rallies. They also fielded an array of stars and celebrities, from musician Bappi Lahiri to magician P.C. Sorcar Jr, and taunted local leaders with slogans like ‘Bhaag Mukul Bhaag’ and ‘Bhaag Mamata Bhaag’ (Run Mukul Run, Run Mamata Run). But in the end, the party swallowed its own words and welcomed into its fold one of the leaders—Mukul Roy—it had mocked.

“One reason why it’s difficult for the BJP to gain a foothold here is that the party doesn’t seem to have a strategy,” Chakraborty says. “It has no ground workers compared to the Trinamool or even the Congress and the Left.” A Bengal BJP leader concurs: “We have prominent leaders, but not enough to take on the ruling party. Our voteshare percentage shot up from six to 17 in the last Lok Sabha election, but we need people manning the grassroots.”

In Singur, the small town that gained prominence as the locus of the controversial Tata Nano project, a farmer says the BJP “doesn’t exist as far as we are concerned”. And yet, many in that region are desperately seeking an alternative. A disgruntled farmer says he lost his land to the Nano project because of the CPI(M), while the factory is gone because of the Trinamool. “The BJP hardly cares about us.”

It seems to come sporadically, this toying with the idea of BJP as an alternative. The first ‘saffron wave’ peaked after 2014 but slumped by 2016, when the assembly elections “showed that Trinamool rules, with its 213 seats”. At that point, the BJP trailed behind even the Congress and the Left. Later, that equation was inverted—but in a way that should pose existential questions to the Left and Congress, not to Mamata.

The other factor is Bengal’s complex and fraught social relations—many wonder if saffron politics can at all sustain there. “The BJP is no party for Bengal…34 years of Communist rule has turned people secular and that does not go well with communalism,” says Chakraborty. The BJP will always find it difficult to attain a critical mass in individual seats, in spite of its soaring voteshare. “The Trinamool has so cleverly compacted the Muslim vote. The Hindu votes are, as oppo­sed to that, scattered. Parties that gain the confidence of Muslims don’t need to worry about the remaining votes,” he adds.

Mamata extends a host of sops to the community. Her rivals criticise the move as populist and exhibitionist, but Muslims are mostly convinced that Didi is their friend. “She cares about us and we’ll vote for her,” says Mehrunnissa Bibi, a Calcutta pavement dweller. “We won’t vote BJP…it’s communal.” Simple equation.